Bulk like an Egyptian! Topless beefcake police cadets pose in front of president at graduation

Bulk like an Egyptian! Beefcake police graduates STRIP OFF and pose in front of President Sisi to celebrate completing their training

Police in Egypt have put on a show of strength with a shirtless parade captured in a now-viral video.

Rows of men with rippling muscles are seen standing to attention on the roofs of vans, cars and tanks as multiple Egyptian flags flutter in the footage.

At one point, a multi-tiered platform holding dozens of statuesque action men appears to the accompaniment of dramatic music.

The bronzed beefcakes are new recruits to the Egyptian police who were taking part in a graduation ceremony outside Cairo on Thursday.

Rows of men with rows of muscles: New police cadets in Egypt put on a show of strength in a topless parade at a graduation ceremony outside Cairo on Thursday 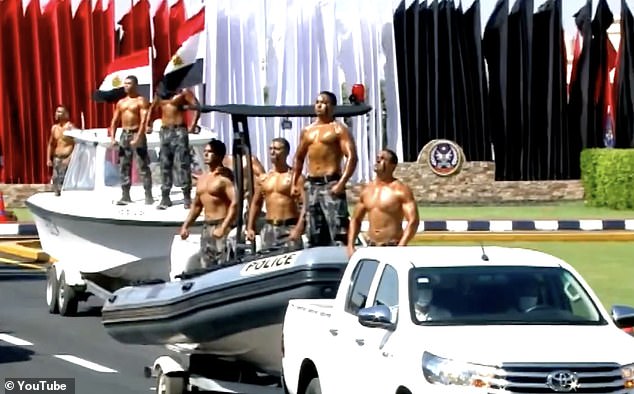 Some social media users compared the procession to a Pride parade and poked fun at the prominence of boats, considering Egypt’s arid desert landscape

The event, which was broadcast on Egyptian TV, has caused a stir on social media, with many users comparing the images of topless men standing on vehicles to a Pride parade.

‘Now that’s a Pride parade!’ one user commented on Youtube.

The link was no doubt unintentional as the conservative country has been known to use the charge of ‘debauchery’ to prosecute LGBTQ people.

A voice over on the TV broadcast reportedly said that the ‘strong men who show their strong bodies’, alongside armoured vehicles were meant to represent the strength of Egypt’s security forces.

But some seem to have missed the message, apparently finding it difficult to look beyond the glistening physiques on show.

Perhaps anticipating this, the voice over commentator noted that the parade would be ‘great material for memes for a long time,’ according to tellerreport.com.

Social media users also poked fun at the prominence of boats in the parade in the extremely arid country, though Egypt does have a coastline and is home to much of the River Nile. 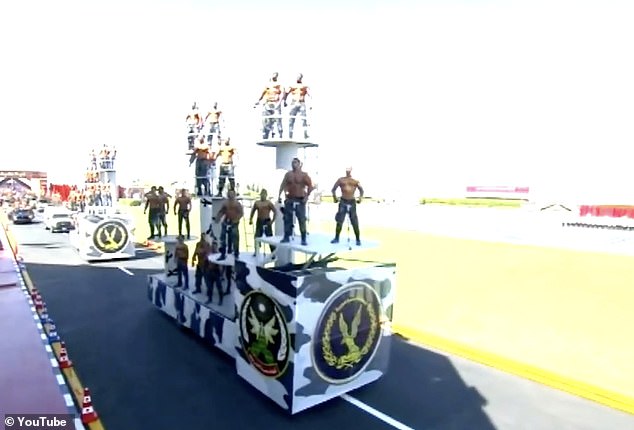 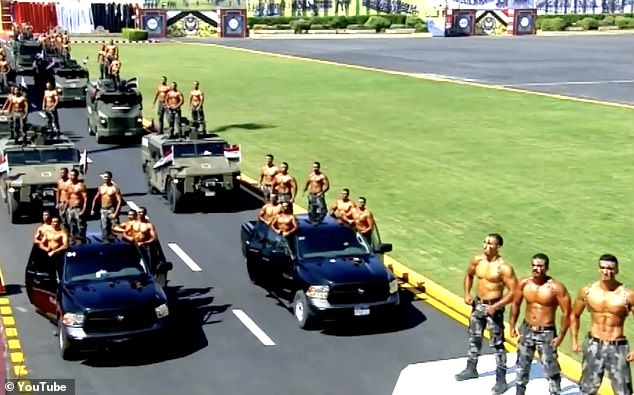 The studs stand to attention as they pass the guests, including Egyptian President Abel Fattah el-Sisi

At one point the studs can be seen kneeling as they pass Egyptian President Abdel Fattah el-Sisi, a former army general, and the guest of honour at the celebrations.

The ceremony also included demonstrations of cadets sporting abilities and a swearing in of the new cadets.

The parade took place in New Cairo, a megacity on the outskirts of Cairo planned as a purpose-built capital.