This is the hilarious moment a boy is betrayed by his family’s bulldog while the pair play at a local children’s park playground in Houston, Texas.

The duo were meant to be taking turns on the plastic slide when the uncouth dog, Diesel, decides to rush for his go.

Rather than taking the slide down properly he opts for a heroic leap halfway, bringing him crashing into poor Jeziah’s head.

Unfortunately for the small boy, bulldogs are on the stocky side and the pair collide fairly heavily.

The dog’s weight throws the child off the slide and into the turf beneath the slide.

As the kid looks up he treats his dad to the comical sight of a face covered in mud, as though he were an actor in a slapstick comedy.

Geronimo! The dog leaps at the last minute slamming into the back of the little lad’s head, knocking him to the ground 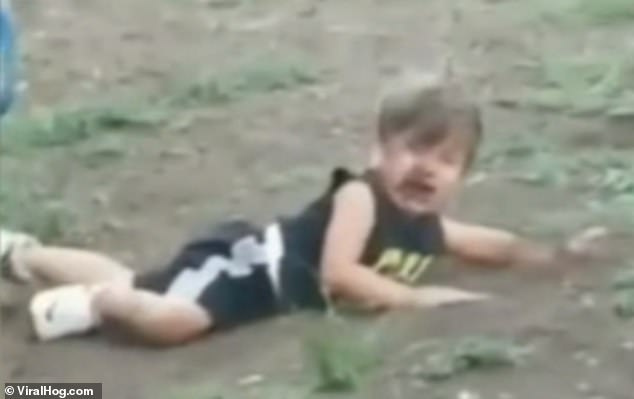 Ouch! The fall leaves the boys face covered in dirt like something out of a scene from a slapstick comedy sketch

Out of surprise the dad stifles a curse with his laughter, as the hilarity of the situation overrides his parental instinct.

Soon the tears begin however as the poor boy realises he has been betrayed by what was supposed to be man’s best friend.

The dog seems quite unfazed by the cries as he saunters off, perhaps debating another go down the slide.