Bulldog ‘teeming’ with hundreds of fleas died from infestation

A bulldog died as the result of the worst flea infestation RSPCA inspectors had ever seen after its owner failed to take it to vets, a court has heard.

Members of the public contacted the animal welfare organisation and police after the dog, called Little Bruv, collapsed in the street.

The pet’s owner Paul Briggs has now been banned from keeping animals for five years after admitting an offence under the Animal Welfare Act 2006.

A court heard the severity of the flea infestation caused the two-year-old dog’s organs to shut down. The bulldog Little Bruv (pictured left) collapsed in Poole, Dorset, as a flea infestation caused his organs to shut down. His owner Paul Briggs arriving at Poole Magistrates Court (right)

The brown bulldog was also suffering anaemia and had symptoms of lethargy, weakness and a rapid pulse rate.

RSPCA inspectors rushed the dog to an emergency vet after he had been seen struggling to stand by concerned onlookers.

They soon discovered Little Bruv’s fur was ‘visibly teeming’ with hundreds of fleas.

Although the vet administered a fast-acting flea treatment the dog couldn’t be helped and he later died as a result of the infestation. 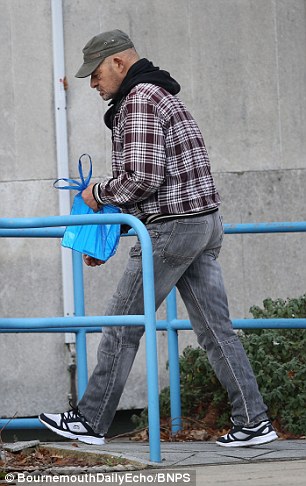 Briggs (shown), of Poole, Dorset, was also been banned from owning pets for five years

Briggs, 48, appeared at Poole Magistrates’ Court where he admitted failing to take such steps as were reasonable to ensure Little Bruv’s needs were met by not protecting the dog from injury, suffering or disease on dates between July 1 and 22 last year.

He also admitted separate charges of attempted burglary, possessing a knife in a public place and two counts of commission of a further offence while subject to a conditional discharge.

Magistrates sentenced Briggs to six months in prison suspended for 12 months and a rehabilitation activity requirement for a maximum of 20 days.

Briggs, of Poole, Dorset, was also been banned from owning pets for five years, and must pay surcharges to fund victim services and court costs.

‘He was neglected and left to suffer when all he desperately needed was help. We hope this shows people that fleas must be tackled quickly.

‘As well as being very uncomfortable for your pet they can pose serious and even fatal risks to their health.’