‘Screams and then it went quiet’: Body of boy, five, is found by police divers after family boat capsized off the NSW coast

The body of a five-year-old boy has been found by police divers after a boat capsized off the NSW coast near Wollongong.

Police say the boat with four on board capsized near Bulli Point about 6.20pm on Saturday.

Two men, aged 23 and 31, were pulled from the water about 8pm by a rescue helicopter crew.

The body of a boy, five, has been found by police divers after a boat capsized off NSW coast

They were taken to Wollongong Hospital in a stable condition and have since been released.

A search for the boy and a 28-year-old man resumed on Sunday morning after being suspended at midnight.

The capsized boat was towed into Port Kembla harbour on Sunday morning where police divers found the body of the five-year-old boy.

The search continues for the missing man.

Emergency crews reported seeing the young boy on the hull of the capsized vessel on Saturday night before his body was found on Sunday.

‘The callers were reporting that multiple screams appeared to be coming off Bulli Headland from the rocks,’ a police spokesman told The Daily Telegraph.

‘They heard the screaming for quite some time and then it went quiet.’ 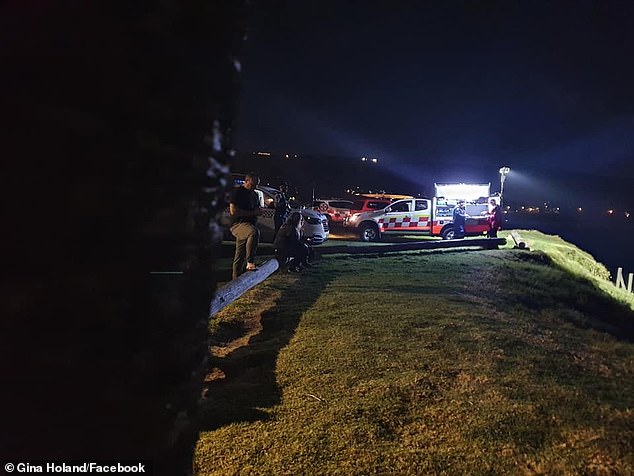 A rescue operation was launched after multiple emergency calls reported desperate screams near the rocks on Saturday night. Two men, aged 23 and 31, were pulled from the water about 8pm – while a 28-year-old man is still missing