The family of a young refugee ‘waterboarded’ at his school have threatened to sue anti-Islam activist Tommy Robinson over his claims their son was involved in an earlier attack.

English Defence League founder Robinson – recently made an adviser to Ukip – attempted to counter the outrage over the bullying video shared online earlier this week.

In an online rant, he alleged the Syrian boy, who is called Jamal, had earlier joined in an attack on a white girl at the school.

But his incendiary claims were immediately challenged by others online, who posted messages in which the girl’s mother denied Jamal was involved.

Jamal’s family, who fear they may have to move out of the area over the furore, have now said they are considering legal action.

Their lawyer told MailOnline: ‘This is something that has just added to the terrible situation Jamal is in. I am considering legal action over this.’ 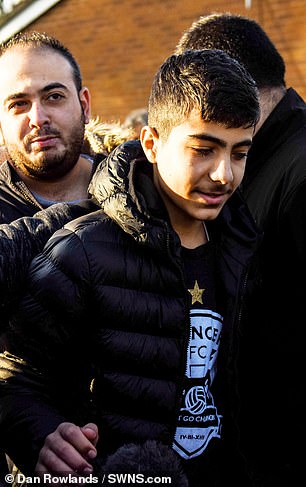 Tommy Robinson could face legal action after he accused a bullied refugee boy, Jamal (pictured, right, today), of taking part in an earlier attack on a white girl

Robinson was yesterday accused of having influenced the bully, after it emerged the boy had shared his Facebook posts.

The 36-year-old today told his followers that he had received messages from a mother from the area, who claimed the bullied boy got involved in an attack on her daughter.

But other Facebook users shared images of messages in which the girl’s mother denied the Syrian boy was involved in the attack, and her message to Robinson had been misunderstood.

In a separate post, Robinson shared a message apparently from the bully’s brother, also claiming the refugee boy had himself bullied a girl, hitting her with a hockey stick.

Critics accused Robinson of ‘stirring up hate and division’ with his online comments, with another saying the activist was ‘trying to make the country hate a child’.

It comes after West Yorkshire Police said that a 16-year-old has been interviewed over the attack on the refugee boy, and reported for summons for an offence of assault ahead of a youth court appearance.

The boy was questioned by police over the footage in which the 15-year-old victim, with his arm in a cast, is thrown to the ground. 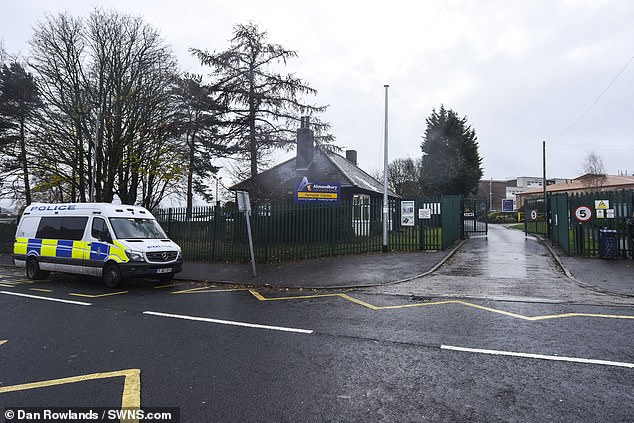 Police outside the Almondbury Community School in Huddersfield, West Yorkshire, where the attack happened

Attack victim thanks public for support as he arrives at school 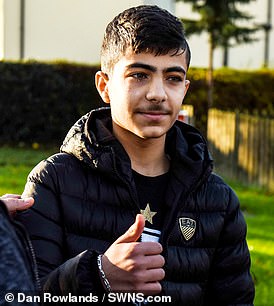 Jamal, 15, said ‘thanks to everyone’ as he arrived at Almondbury Community School in Huddersfield today.

He was surrounded by protesters showing support for his family in the wake of the horrific assault, and just a few minutes later got back into a car which drove off.

It is the first time Jamal has been seen in public after his family’s lawyer said they were happy for him to be pictured.

The video shows Jamal being dragged to the floor by his neck before his attacker says, ‘I’ll drown you’ and forces a water bottle into his mouth.

‘I woke up at night and just started crying about this problem. They think I’m different – different from them,’ he told the broadcaster.

‘I don’t feel safe at school. Sometimes I say to my dad, ‘I don’t want to go to school anymore’. I was just crying and I didn’t do nothing because I respect the school rules.’

Supporters say they are organising a peaceful protest outside the school on Thursday.

He appears not to have been the only victim, with a fresh video emerging of a hijab-wearing girl pushed down a grass verge and shoved by a group.

The family’s lawyer, Tasnime Akunjee, said it is the boy’s 14-year-old sister and she was attacked on Tuesday morning. 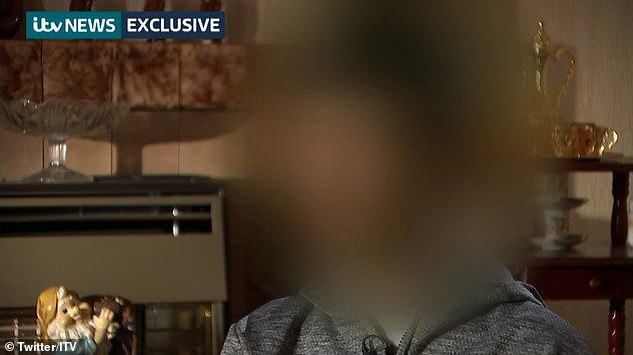 West Yorkshire Police said: ‘We have been made aware of a video showing a girl being assaulted at Almondbury Community School yesterday (27/11).

‘The incident had not previously been reported to the police but we are now liaising with the girl’s family who we are continuing to support.

‘Anyone who witnessed the incident or who has any information that could assist the investigation is asked to contact Kirklees District CID via 101.’

The first incident’s alleged perpetrator has been the subject of hundreds of violent threats online.

A Facebook account believed to belong to him features numerous posts shared from the page of Robinson.

One of those posts, apparently referencing comments by Boris Johnson about Muslim women wearing veils, read: ‘Should Britain ban letterboxes because of all the trouble they’re causing?’

Robinson was jailed for contempt of court earlier this year after posting videos about a child grooming trial involving a group of Asian men from Huddersfield. He was later freed on appeal.