Bullingdon Club members are escorted off site by college

For more than 200 years it has been one of the most exclusive clubs in the country, notorious for its privileged members, riotous banquets and outrageous antics.

But Oxford University’s Bullingdon Club members were embarrassingly escorted from Christ Church College when they attempted to recreate a modern-day version of the famous 1987 picture that featured former prime minister David Cameron and current foreign secretary Boris Johnson on the steps of the college.

With their tailcoats between their legs, they were told to move on by college porters while students jeered and filmed the rather sorry episode on their phones.

Their humilatating ejection, which happened in June, was because the group had not obtained permission to take the photograph but is also symbolic of the social transformation in higher education.

Martyn Percy, dean of Christ Church, told The Times: ‘Don’t think that an institution like this is the preserve of a certain upper class male.’

Last night Mr Percy hosted a Diwali celebration in the college dining hall, culminating in a performance by a transgender Indian dancer and fire-juggling in Tom Quad.

The incident involving the prestigious club, satirised in the film The Riot Club, was the latest embarrassment for the dining society.

Last year it was reported the Bullingdon club, who expect their members to wear a specially made tailcoat that costs £3,500, was on the verge of folding and had only two members left. 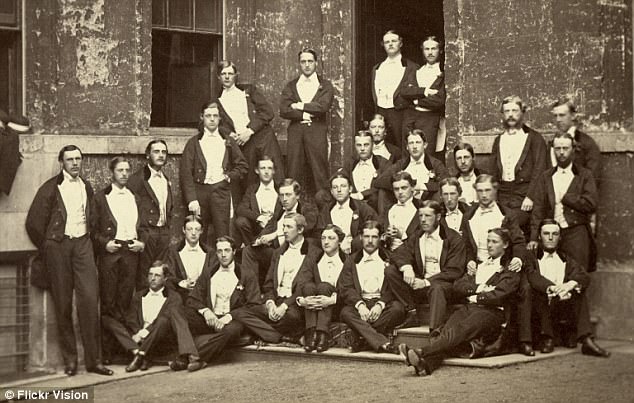 An image of Bullingdon Club members pictured in the late 1800s. Membership of the notorious club has diminished in recent times and was last year on the very of folding with just two members left

Bad publicity, including reports they had burned £50 notes in front of homeless people, was said to have deterred potential members.

In May Mr Johnson, was heckled by students when he visited Balliol, his former college.

Discussing his time in the Bullingdon club, which was founded in 1780, Mr Johnson previously said: ‘This is a truly shameful vignette of almost superhuman undergraduate arrogance, toffishness and twittishness’. 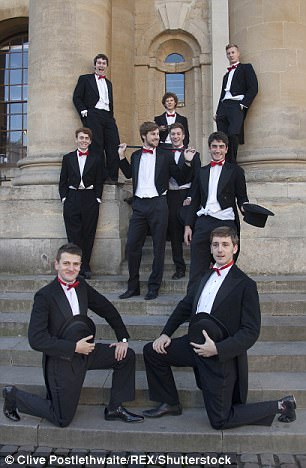 Reports that members had burned £50 notes in front of homeless people are said to have deterred new members. Pictured: A promotional shot of the 2011 play The Bullingdon Club

Former Prime Minister Mr Cameron said: ‘We do things when we’re young that we desperately regret.’

The Bullingdon Club’s ejection from Christ Church highlighted the college’s determination to shake off any ideas it is merely a ‘preserve’ for the privileged few.

Across the UK, universities have tried to recruit students from a more diverse range of backgrounds.

In the past decade there has been a 73 per cent increase in the number of students from the most disadvantaged areas going on to higher education.

Almost 20 per cent of 18-year-olds from the poorest backgrounds went to university last year, compared with 11 per cent in 2006.

Some institutions, including Lady Margaret Hall in Oxford, have also introduced one-year foundation courses aimed at helping poorer students up to the level of their wealthier peers before they embark on a degree.

Last year LMH took 10 students for a foundation course, of whom seven got into the university.

Although universities are trying to help a greater mix of people gain a place, a class divide is developing once they get there.

Disadvantaged students are more likely to drop out in their first year and are also leaving with the greatest debts.

Richer students also tend to live in plusher accommodation while poorer ones stay in unprepossessing flats or with their parents far away from campus.

Analysis from Kingston University revealed black and ethnic minority students were spending up to two hours more getting to lectures than white students.