Bumbag-wearing Range Rover driver mocks a cop for making ‘$55,000 a year’, boasts of owning two businesses and accuses him of being racist after being pulled over for ‘stolen goods’

A Range Rover driver has mocked a police officer for his meagre salary and boasted of owning two businesses after being pulled over for allegedly possessing stolen goods.

Footage shared to TikTok showed the motorist ridiculing the young New South Wales police officer and suggesting he was only stopped because of the colour of his skin and the clothes he was wearing.

‘It’s not that,’ the officer responded as he accused the man of being ‘uneducated’.

The man behind the camera then raised his guess to ‘$65,000 a year’, with the police officer’s facial expression suggesting he was closer this time.

‘At least I’m making something,’ the officer said.

‘Yeah well at least I’m earning two somethings,’ the man being pulled over responded, indicating he was making twice as much as the officer.

The officer replied by suggesting the man was running ‘dodgy businesses’.

‘That’s what you think because I’m wearing Nautica or a bumbag,’ the motorist said.

The indignant Range Rover driver then suggested the officer pulled him over because of his race.

‘Why are you so argumentative?’ The officer asked him. 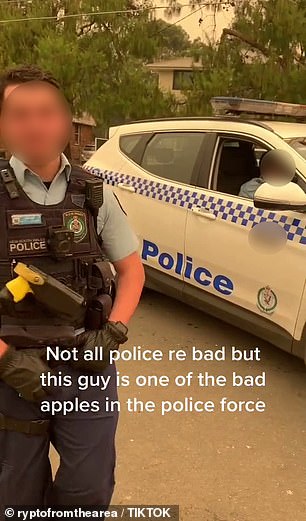 ‘You’re picking on me because of my skin colour.’

The officer then asked the driver how the traffic stop could be racist when he was white.