Bumble founder becomes a billionaire at 31

Bumble founder Whitney Wolfe Herd has become a billionaire at 31 after taking the dating app public, boosting her wealth from $500million to $1.6billion.

Wolfe Herd, who lives a life filled with lavish parties, overseas trips and A-list friends, founded the female-empowering dating app in 2014 after leaving Tinder over claims of sexual discrimination and harassment from male co-founders.

The married mother-of-one was one of five co-founders of Tinder, but left the company in 2014 and sued fellow partners Justin Mateen and Sean Rad for sexual harassment.

She claimed that her former boyfriend Mateen became ‘verbally controlling and abusive’ after their on-off on romance ended and that she was called a ‘slut’ and a ‘liar’.

The fall-out drove the workaholic – who says she wakes up every two hours in the night to check her emails – to create Bumble with the tag line ‘by women, for women’.

The app only allows female members to make the first approach to prospective dates , and promotes itself as a place where women are safe and empowered, and where harassment is rigorously policed.

She is now married to Texas oil heir Michael Herd, has a one-year-old son called Bobby Lee Herd II and enjoys an luxury jet set lifestyle which she shares with her 143,000 followers on Instagram.

Pre-coronavirus highlights included her luxurious 30th birthday party in Capri, Italy, where she was pictured wearing a custom Giambattista Valli dress estimated to be worth $10,000. 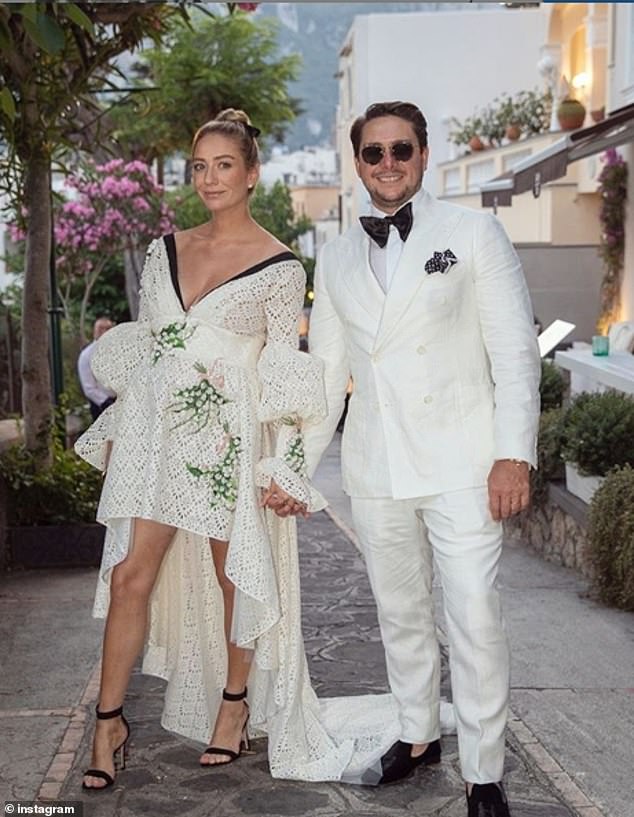 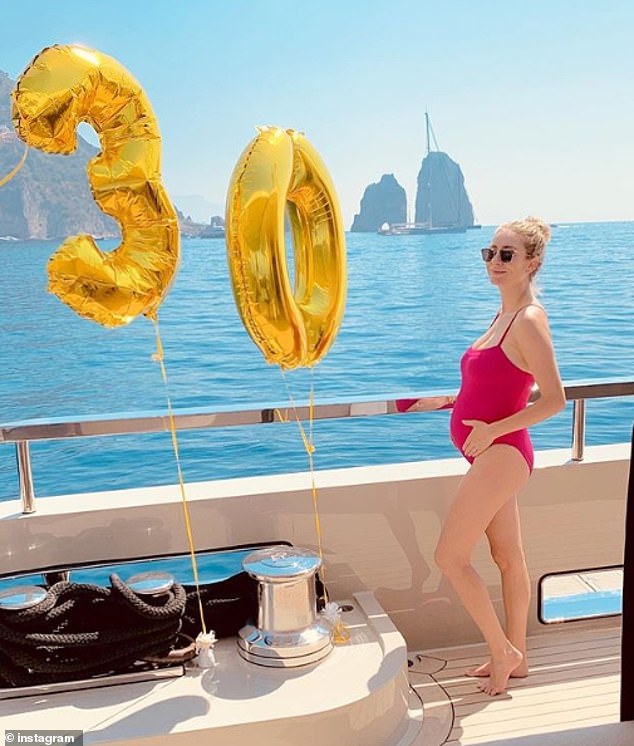 Wolfe Herd regularly showcases her opulent lifestyle on Instagram where she boasts 152,000 followers

She married her husband in opulent fashion in Italy’s Positano back in 2017 and her bevy of A-list friends have become involved in Bumble, including Priyanka Chopra and Serena Williams.

Wolfe Herd – who married Texas oil heir Michael Herd in 2017 and has a one-year-old son called Bobby Lee Herd II – took to Instagram to mark the occasion, writing: ‘Anyone going through a setback, low point, or rough patch.

‘To anyone who feels disempowered in their relationships — or who’s had the courage to make the first move into healthier ones. Today is for you. This is the outcome of starting over again when it feels like the end.

‘It’s a testament to new beginnings, new paradigms, and new norms. Today has shown that barriers can be broken when we believe in a better way.

‘@Bumble is the outcome of a fiercely dedicated team who’ve worked tremendously hard to show that women can, should, and will make the first move. 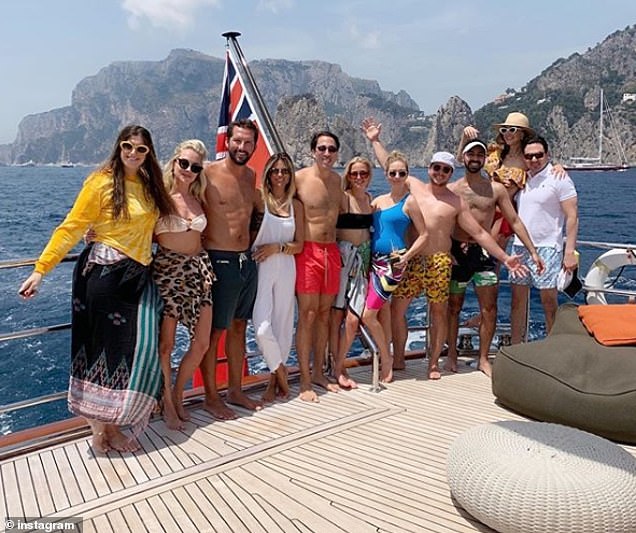 Those who attended her birthday party in 2019 in Capri, which was complete with a yacht bearing her name, included fashion designer Rachel Zoe and Armie Hammer’s wife Elizabeth Chambers 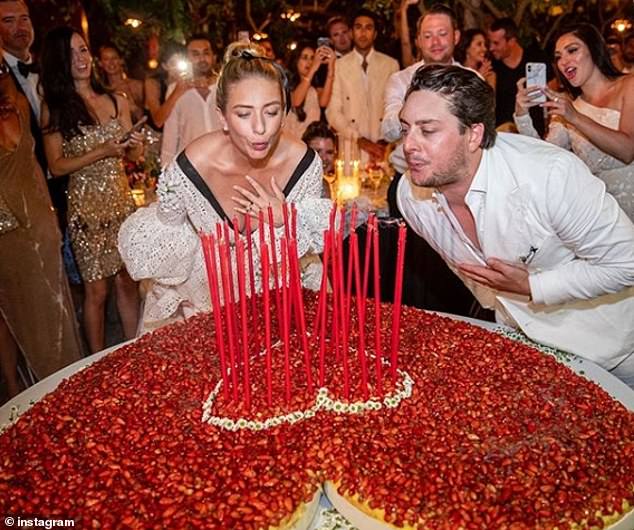 She shared photos from her luxurious 30th birthday party in Capri where she was pictured wearing a custom Giambattista Valli dress estimated to be worth $10,000 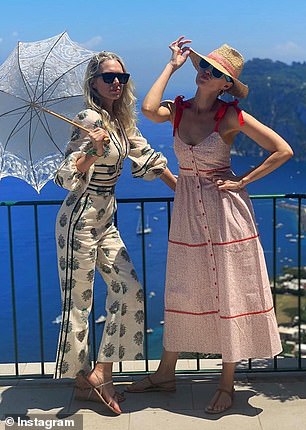 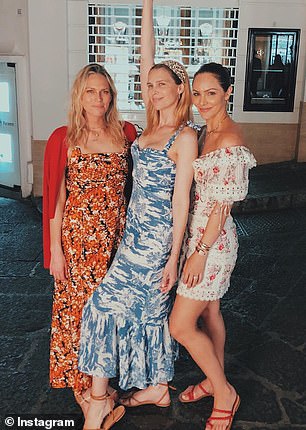 Wolfe Herd was born in Salt Lake City – and lived in Paris as a child when her parents took a sabbatical in Paris.

She studied international relations at Southern Methodist University in Dallas,did foreign exchange program for one year at the Sorbonne in Paris and was a member of the Kappa Kappa Gamma sorority.

Wolfe Herd initially joined the company Hatch Labs before moving to the development team for Tinder.

She was reportedly behind the name of the app, taking inspiration from the flame logo. She has also been credited with fueling its popularity on college campuses.

She left Tinder in December 2014 over sexual discrimination and harassment in the workplace. She reportedly received more than $1 million plus stock as part of a settlement.

Her app was heralded as a game changer in the usually predatory world of online dating as it lets women pick the men rather than vice versa. 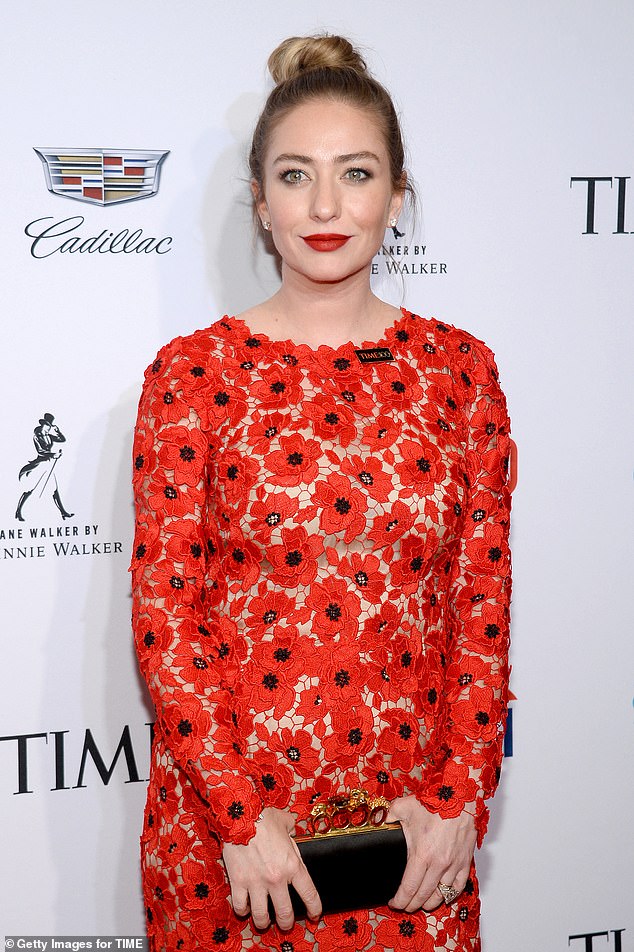 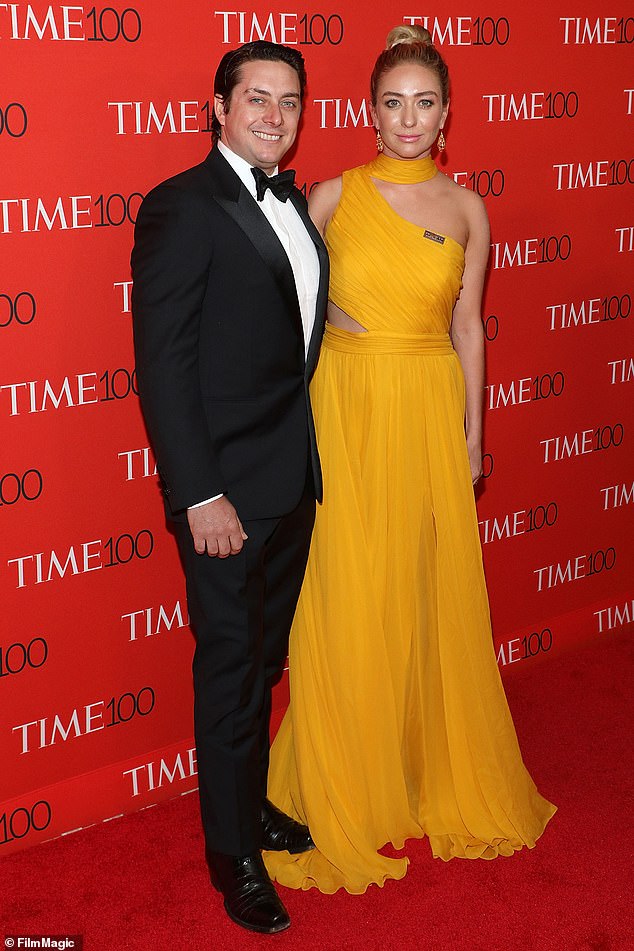 Wolfe Herd with her husband Michael Herd in 2018.  They met while skiing in 2013 and had a three-day wedding on Italy’s Amalfi Coast in 2017 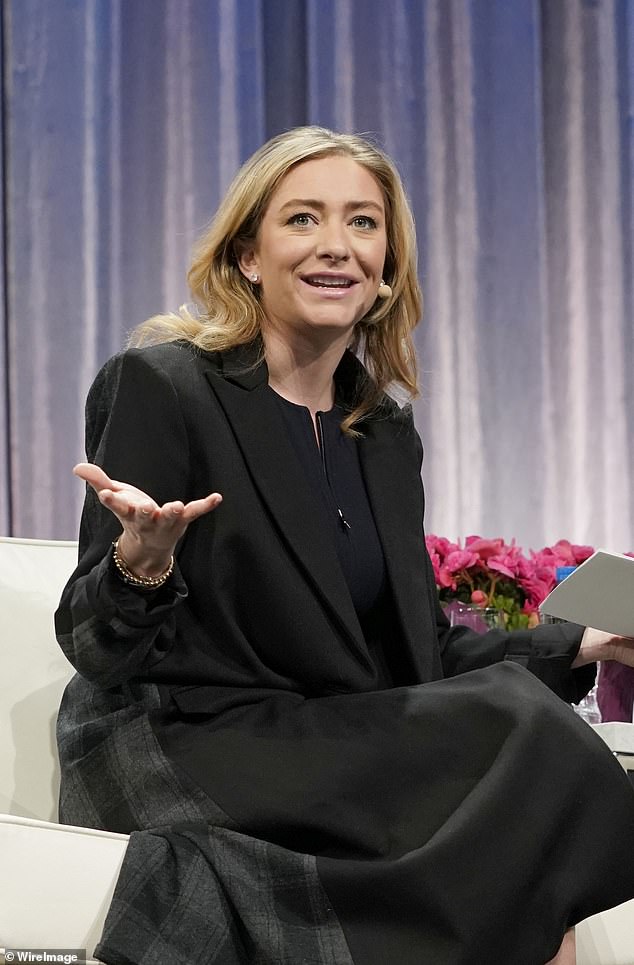 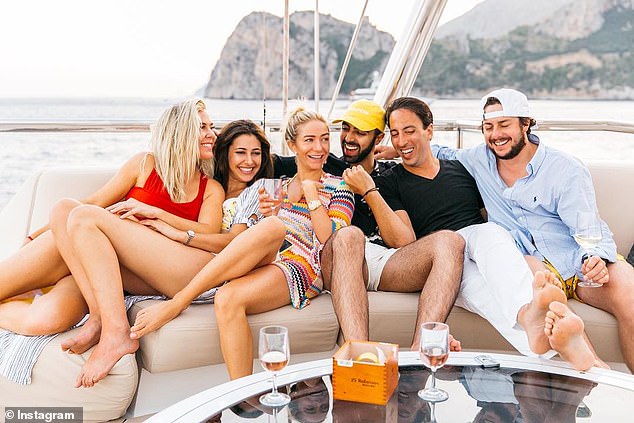 Her Instagram shows her with numerous friends living a glamorous life and travelling to various parts of the world. ‘Out of office (but miss you team @Bumble),’ she captioned this image from July 2018

By December 2015, the app had reached over 15 million conversations and 80 million matches.

The app has the tag line ‘by women, for women’, touting it as a place where women are safe and empowered, and where harassment is rigorously policed.

Wolfe Herd was named one of Business Insider’s 30 Most Important Women Under 30 In Tech in 2014.

In March 2019, Wolfe Herd testified before the Texas House Criminal Jurisprudence committee about the prevalence of unsolicited explicit photos sent to female users on dating apps.

The IPO puts Wolfe Herd into a very rare club of female billionaires. While women make up about half of the global population, self-made women account for fewer than 5 per cent of the world’s 500 biggest fortunes.

She met her husband while skiing in 2013 and had a three-day wedding on Italy’s Amalfi Coast in 2017.

In December 2019, the couple announced the birth of their first child.

A self-confessed workaholic, she has claimed to wake up every two hours during the night to check her inbox. ‘I’m trying to stop that,’ she said in 2017. ‘I get no downtime.’

In 2018, the 28-year-old Bumble dating app CEO revealed she travels with a team of bodyguards after neo-Nazis posted her – and other employees’ – contact details online. 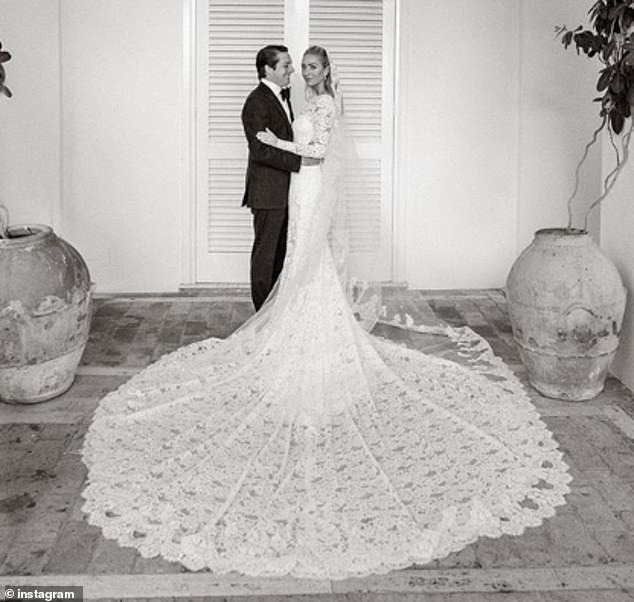 She married her husband, a restaurateur who is also an heir to a Texan oil company, in an opulent fashion in Italy’s Positano back in 2017 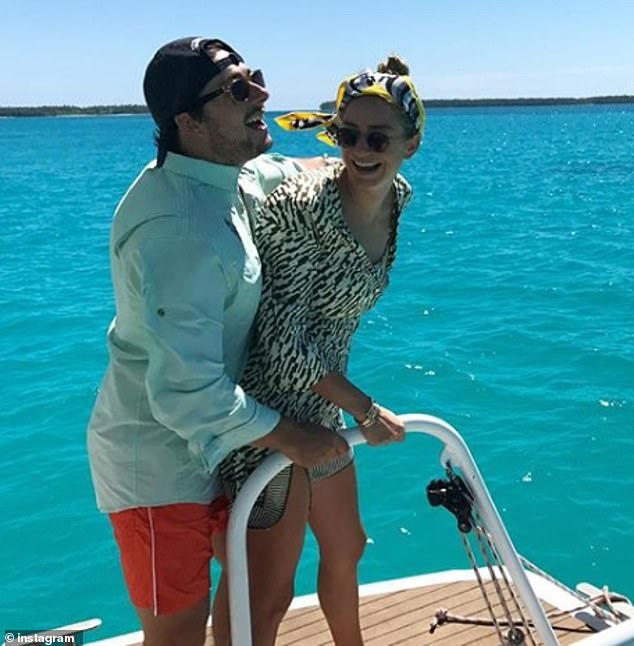 She married her husband, a restaurateur who also has ties to the oil and gas industries, in an opulent fashion in Positano back in 2017. They are pictured on their honeymoon at the luxury The Brando resort in French Polynesia

In an interview with British newspaper The Times, CEO Whitney Wolfe Herd explained how the FBI had to step in after a neo-Nazi organization posted the contact details for herself and multiple other staff members to encourage their followers to harass them.

‘We’re a feminist company so we came under attack,’ Whitney told the newspaper. ‘Faces and phone numbers were put on a neo-Nazi website that the FBI subsequently took down.’

‘The post was a call to action to bring down the feminists of Bumble,’ the CEO continued.

Wolfe Herd was forced to defend Andreev in 2019 following allegations published in Forbes that he oversees a misogynistic and sleazy culture within Bumble’s parent company, Badoo. 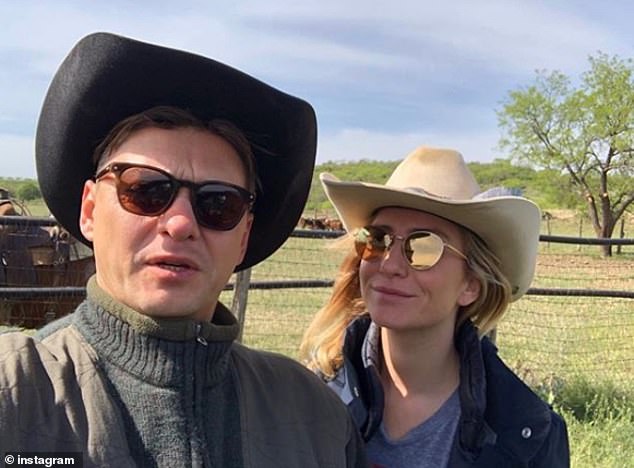 Wolfe Herd and Andreev have both shared photos of each other vacationing in Aspen, Colorado and on a Texas ranch (pictured above)

Among the explosive allegations made by former staffers were that the objectification of women was routine and there were cocaine and ketamine-fueled parties with prostitutes in the office.

The claims posed somewhat of a problem for Wolfe Herd and Bumble given the dating app prides itself on empowering women and giving them a safer environment by letting them make the first move.

‘He’s become my family and one of my best friends,’ she said of Andreev in a statement at the time.

‘What I’ve seen firsthand from Andrey is creative and motivating behavior. Andrey has never been anything but kind and respectful to me.’

In a statement to DailyMail.com at the time, Wolfe Herd said she was ‘mortified by the allegations’ and that she learned of the majority of them only when they were published by Forbes.

‘All of us at Bumble are mortified by the allegations about Badoo (Bumble’s majority owner) from the years before Bumble was born, as chronicled in the Forbes story. I am saddened and sickened to hear that anyone, of any gender, would ever be made to feel marginalized or mistreated in any capacity at their workplace,’ she said. 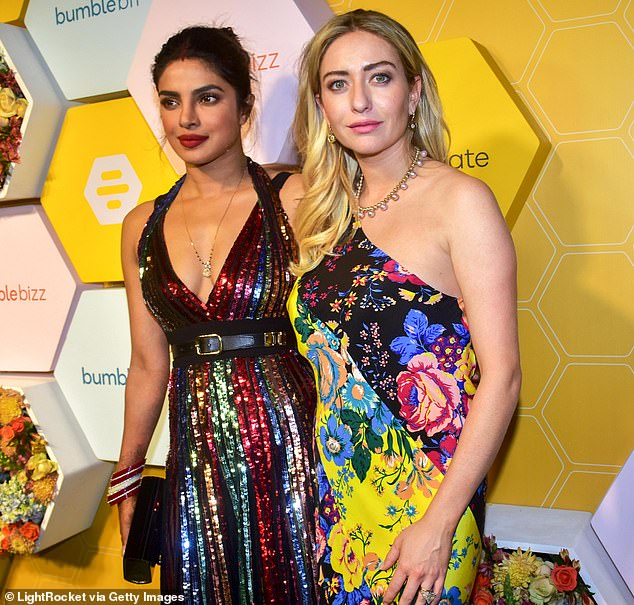 Wolfe Herd also has a bevy of A-list friends who have become involved in Bumble, including Priyanka Chopra. They are pictured at Bumble’s India launch party at Soho House in Mumbai 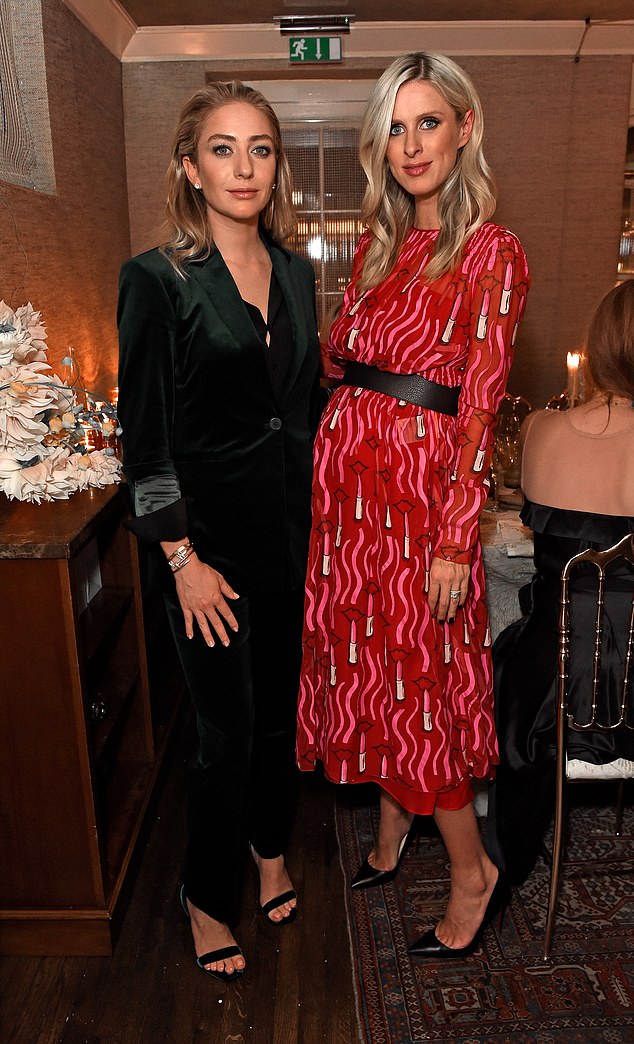 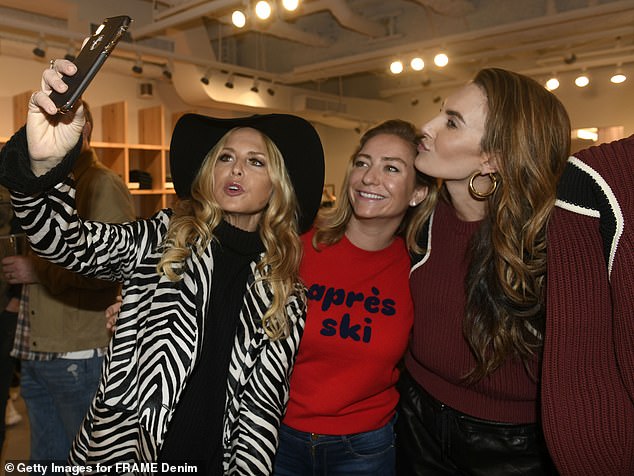 ‘From my time speaking with the reporter, I was only able to share my personal experiences, which have been nothing but positive and respectful, ranging from 2014, before Bumble existed, and during the 5 years since. To this day, we at Bumble have never seen or heard of any of this behavior from any team members, and if we had we would have never tolerated it.

‘However, I would never challenge someone’s feelings or experiences. I offered to the reporter to extend my contact info to anyone who felt their experience was negative and said I would be an ally and open ear to them.

‘That offer still stands. As a woman who has been through dark times, please know that I am deeply sorry for anything that could have taken place that made anyone feel uncomfortable before my time building Bumble. 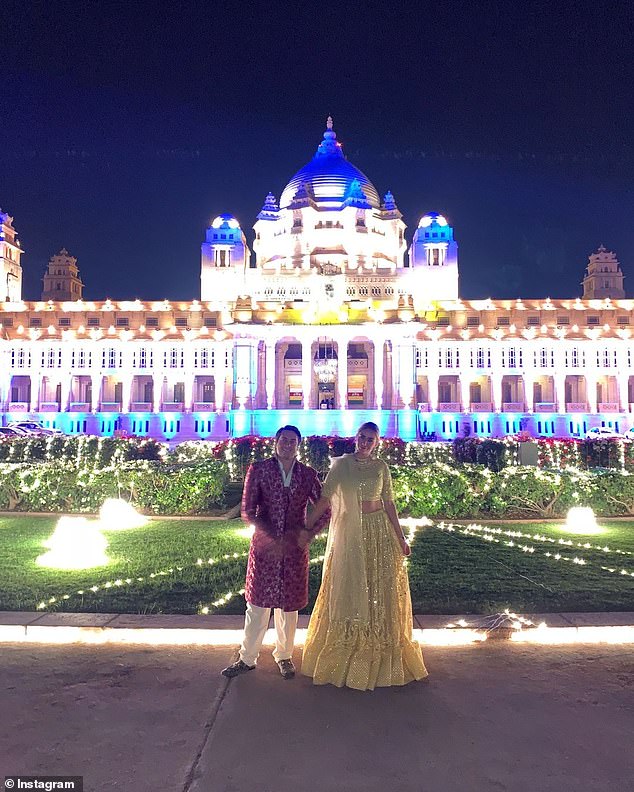 On Instagram, Wolfe Herd shares her extensive travels. In 2018, she travelled to Jodphur, India for a friend’s wedding

‘And know that I feel personally responsible by association for the well-being of each and every team member in the group, regardless of what company or what office around the world, from the past or the present.’

Andreev, who owns parent company Badoo and is still the majority owner of Bumble, contacted Wolfe Herd following her settlement from Tinder and suggested they collaborate.

It was Andreev who pushed for a woman-driven dating app despite Wolfe Herd’s suggestion for a social network. Wolfe Herd was behind the idea for women to call the shots and the fact they have 24 hours to initiate conversation before the match expires.

He provided the infrastructure for Bumble – including development and engineering via his London office. Bumble’s headquarters are in Austin, Texas, where Wolfe Herd is based.

In the early days of Bumble, Wolfe Herd is believed to have flown between London and Austin 15 times in just four months.

In the years following Bumble’s success and rise to become the number two dating app in the U.S. – behind Tinder – Wolfe Herd has continued her jet-setting lifestyle.