A young father who drank half a carton of beer every day has revealed how he’s in the best shape of his life after he transformed his ‘dad bod’.

Ben, from Bundaberg in Queensland, saw his weight balloon to 135kg after years of living off an unhealthy diet of beer, pizzas and a litre of ice cream in one sitting.

‘I felt terrible at my heaviest. I refused to look in a mirror and would never take my clothes off, even in front of my wife as I felt ashamed,’ the 33-year-old, who works in administration and sales, told Daily Mail Australia.

Determined to get on top of his weight once and for all, Ben – who’s 183 centimetres tall – shed 35 kilos in just six months after he was inspired to make a change when he noticed he was struggling to ‘keep up’ with his two-year-old son.

Before and after: Ben, from Queensland, who drank half a carton of beer every day has revealed how he’s in the best shape of his life after he transformed his ‘dad bod’ 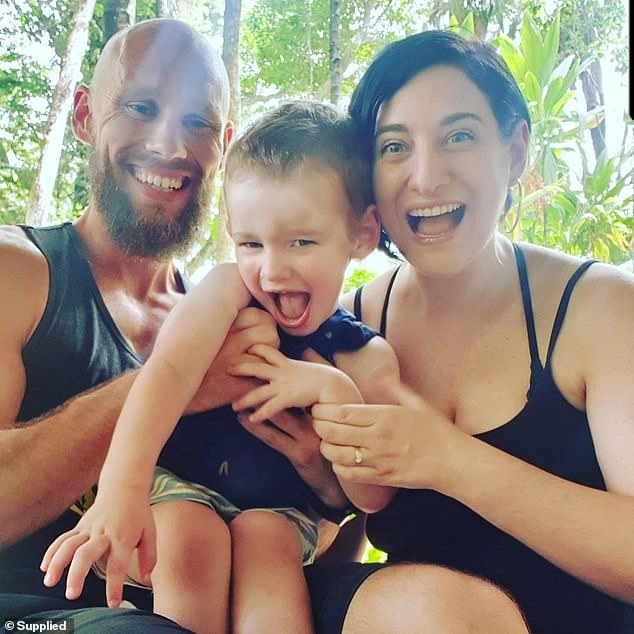 Determined to get on top of his weight once and for all, Ben was inspired to make a change after he noticed he was struggling to ‘keep up’ with his two-year-old son (pictured with his wife and their toddler boy)

What did Ben do to lose weight?

– Cut out beer and ice cream

– Reduced the amount of takeaway meals he was ordering

– Bodybuilding in a gym

‘That was a turning point. I knew I had to do all I can to be healthy, so I can be around for him as long as possible. He’s the reason I wanted to get healthy and make some positive changes so one day I decided “enough is enough”,’ Ben said.

His weight gain all started from his childhood. And as he got older, he didn’t pay much attention to the types of food he ate.

‘I had a pretty rough childhood and never learnt how to eat properly meaning I was a bigger kid who struggled with weight for years,’ he said.

Before making a lifestyle change, his daily diet consisted of takeaway and alcohol.

‘I was drinking half a carton of beer every day. I struggled to be motivated day to day, so I would start drinking as soon as I could just to get through,’ he said.

‘I was polishing off a pizza and a litre of ice cream nearly every day too.’ 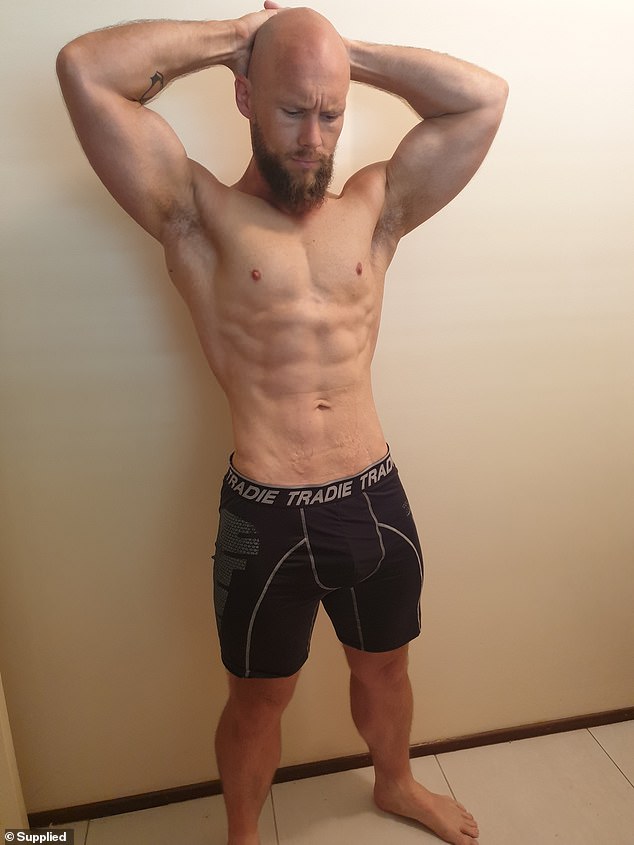 Within six months, the dad sculpted his dream physique after he lost an incredible 35 kilos – but his weight loss didn’t come too easy 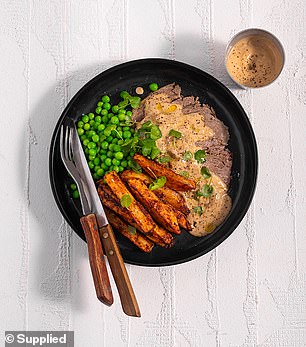 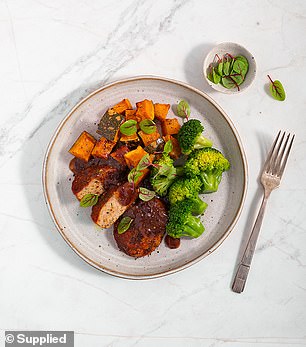 His typical day on a plate now consists of a ‘mix of food from all food groups’. He also enjoys Youfoodz ready-made meals (picture of some of the meals he eats in a typical day)

He decided to break the cycle of bad habits such as his ‘poor diet and laziness’.

‘I began researching food and how certain foods benefit the body, particularly when you eat healthy,’ Ben said.

‘I started walking every day, cut out the beer, ice cream and reduced the amount of takeaway I was getting. I learnt how to monitor my calorie intake.’

Within six months, the dad sculpted his dream physique after he lost an incredible 35 kilos – but his weight loss didn’t come too easy.

‘I did struggle a bit at first – definitely coming to the realisation that I had to have balance, rather than a crash diet,’ he explained.

‘Once I realised that I gained some traction. I thought bread was evil; turns out no food group is off limits.’

His typical day on a plate now consists of a ‘mix of food from all food groups’.

‘I don’t follow the fad diets out there, I believe it’s all about balance,’ he said. 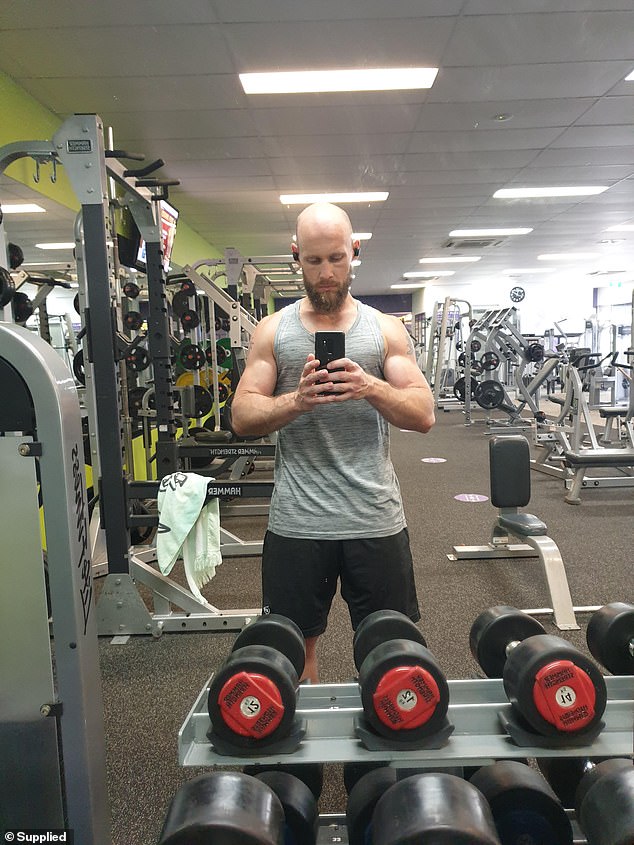 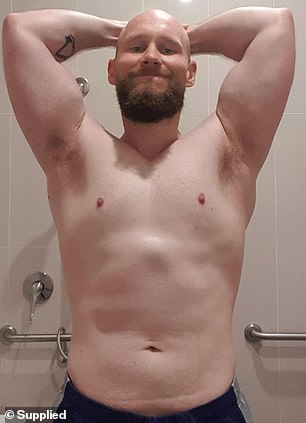 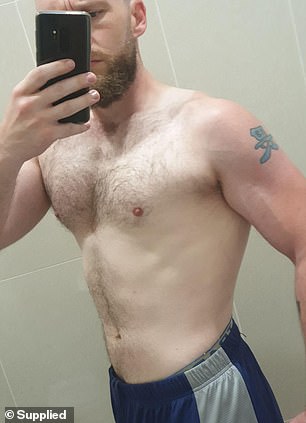 ‘I also eat a lot of Youfoodz ready-made meals – it’s something that really works for me. It’s a perfect fit for my dietary needs and it allows me to achieve my goals.

‘The meals have become a staple every day that way I never have to make a decision about what to eat, the hard work is already done for me – it’s changed my life.’

And while he leads a healthier lifestyle now, Ben said he hasn’t deprived himself of his favourite foods.

‘I still love treats like French toast for breakfast, sugar free soda, a beer and some ice cream every now and then,’ he said.

His workout regime includes bodybuilding and he occasionally ‘mix things up with a bit of walking’.

‘Now, I feel confident which means I’m no longer afraid of looking in the mirror or taking my shirt off,’ he said.

For those struggling to lose weight, Ben said: ‘It doesn’t have to be so hard. There are actually some simple and fun ways to eat healthy.’