This is the moment a tourist plunged from a bungee platform over an Argentine dam – only for the cord to detach sending the jumper plummeting into the water below.

The 36-year-old, from Buenos Aires, fell from a height of around 131 feet at the Cabra Corral Dam in the northern Argentine province of Salta.

In the footage, the man, identified only as M.M., is seen preparing to jump from the platform Seconds later, he jumps head first towards the water as a filming companion whoops in delight.

However, as the cord tightens, it detaches from the platform and the man plummets into the water with a thunderous splash. A woman can be heard crying out in Spanish, asking what happened.

A 36-year-old tourist from Buenos Aires prepares for the drop after paying for the bungee jump at the Corral Dam in the northern Argentine province of Salta. 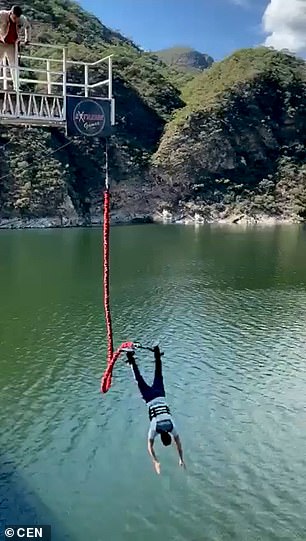 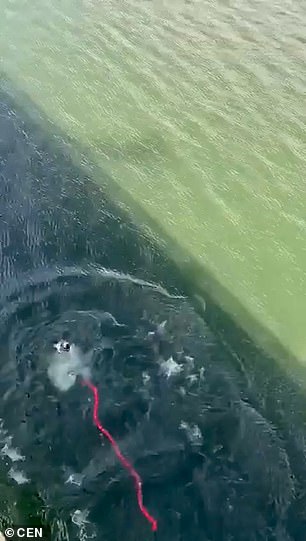 But after he jumps, the rope suddenly snaps, leaving him to fall from a height of around 131 feet

The tourist appears to be uninjured in the water as a rescue vessel that was stationed at the scene immediately approached him.

According to local media, the man was taken to a local hospital where he was treated for polytrauma, hypothermia and muscle pain.

The Buenos Aires resident was also invited to file a complaint against the excursion company at the Coronel Moldes police station.

Police officers went to the dam after the emergency report and reconstructed the events based on statements from the victim and an employee of Extreme Games Salta, the company offering the bungee service.

Initial tests indicated that the cord was not properly attached due to human error, however, the incident remains under investigation.