Bungling bank robbers cause thousands of pounds worth of damage

A group of bungling bank robbers caused thousands of pounds worth of damage in a bid to break into a Santander branch – to make off with just £20.

Staff turning up to work at Tricketts Insurance Brokers in Rawtenstall, Lancashire, were left stunned on Tuesday after realising there had been a break-in.

Over the Bank Holiday Weekend, thieves had smashed their way into the office in an attempt o get access to the bank – and its cash machines – next door.

The raiders forced open the office’s steel-plated back door before using hammers and chisels to hack away at the wall in an attempt to break through.

But their efforts ended up being an epic fail –  when they had no luck and ending up leaving with just £20 found inside the insurance offices.

Pictured: Thugs attempted to smash their way through Tricketts Insurance Brokers in Rawtenstall to gain access to the Santander bank next door 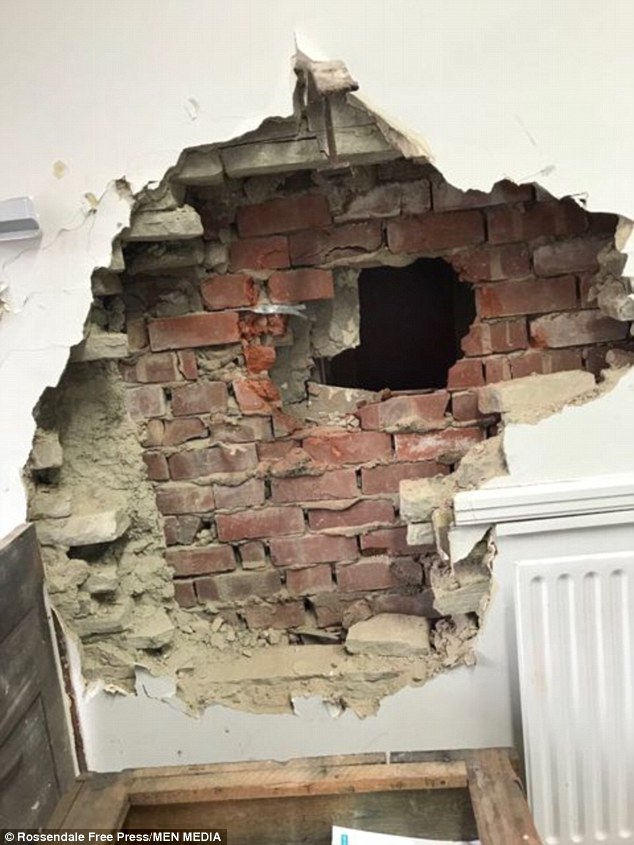 Breakthrough: The group of robbers hammered their way through a brick wall

The only money in sight was around £20 in cash from the Tricketts premises.

Tricketts director Janine Packman, who visited the premises by chance on Sunday, believes the thieves were targeting two cash machines, in the bank next door.

Ms Packman said: ‘When I got into the main room, my mouth dropped. There was a hole in the wall – they were trying to get to the Santander ATM on the other side. You could see the outer metal casing through to the corner and side of the ATM.

‘We don’t believe they used power tools – there’s no evidence – so they must have used chisels and hammers – it was a massive effort.’ 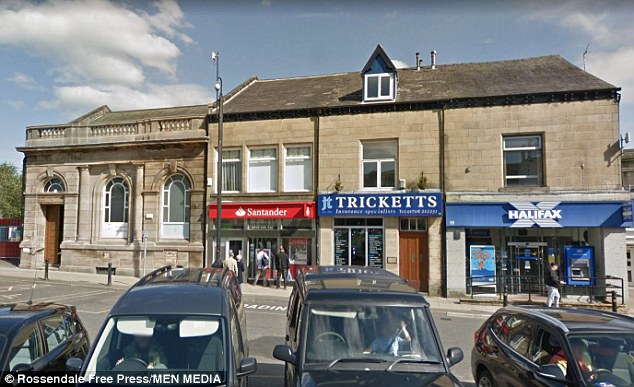 Pictured: Tricketts was targeted by the group who hoped to get into the bank and next door’s cash machines

Despite only losing around £20 in petty cash, Ms Packman believes that the cos tof repairing the damage to Tricketts is at least £10,000.

She said: ‘Everyone is quite shocked, though it’s sunk in a little now. The ‘Bank Holiday Bank Heist of Rawtenstall’ – it’s just insanity, who decides that’s a good idea?’

Aside from damage to the back door and wall, the thieves have destroyed an old counter desk – which was original to the building and had sentimental value among staff.

Lancashire Police confirmed they received a call about a suspected burglary at a commercial premises on Bank Street, Rawtenstall around 2pm on Sunday, August 26.

A spokesperson said: ‘Suspects have tried to smash the wall next to the bank and appear to have been looking to target cash machines.’ There have been no arrests.

Anyone with any information should call Lancashire Police on 101, quoting reference EF1813251.