With a dash of Countryfile, a smattering of The Choir and more than a hint of 3pm on Christmas Day, this was not so much ‘A Celebration for Commonwealth Day’ – as BBC1 called it – as a genuine royal variety performance.

We saw the Queen striding happily through Windsor Castle – talking about ‘selfless dedication to duty’ and ‘transcending division’. We watched a speech from the Prince of Wales at the lectern of Westminster Abbey.

The Duke and Duchess of Cambridge discussed healthcare over a video call with a doctor in South Africa while the Countess of Wessex talked women’s rights with Malawi and Australia.

The Duchess of Cornwall, meanwhile, confided to Clare Balding that the pandemic had transformed her from a technophobe into something of a cyber ‘addict’ with a new online book club.

This was the Royal Family looking outwards, reflecting the royal spotlight on to others rather than bringing it upon themselves. It also included a lot of superb music, too.

We saw the Queen (pictured) striding happily through Windsor Castle – talking about ‘selfless dedication to duty’ and ‘transcending division’. We watched a speech from the Prince of Wales at the lectern of Westminster Abbey

There was certainly none of the introspective angst and drama of the subsequent offering coming up a few hours later on another royal channel – America’s CBS.

Yesterday afternoon’s one-off programme on BBC1 was never supposed to be an alternative, let alone a rival, to the Harry and Meghan show with Oprah Winfrey. However, comparisons were inevitable as soon as it emerged that both the UK and US arms of the family would be on air within hours of each other.

Yesterday’s BBC1 affair had long been planned ahead of Commonwealth Day which falls today as it always does on the second Monday of March.

Normally, the main event is a huge service at Westminster Abbey with a congregation of 2,000 and a substantial royal turnout led by the Queen.

Thanks to the pandemic, of course, there could be no prospect of that this year. Instead, the BBC gathered up the three main ingredients – royalty, music and the Abbey – for a socially-distanced celebration of what it is that makes the Commonwealth tick.

Last year’s event will be long-remembered for two reasons. First, it was our last big, national event before the lights went out. Within days of seeing the Queen and her family at the Abbey, Britain and most of the world were in lockdown. Second, it was also the occasion at which the Sussexes bowed out of regular royal duties. 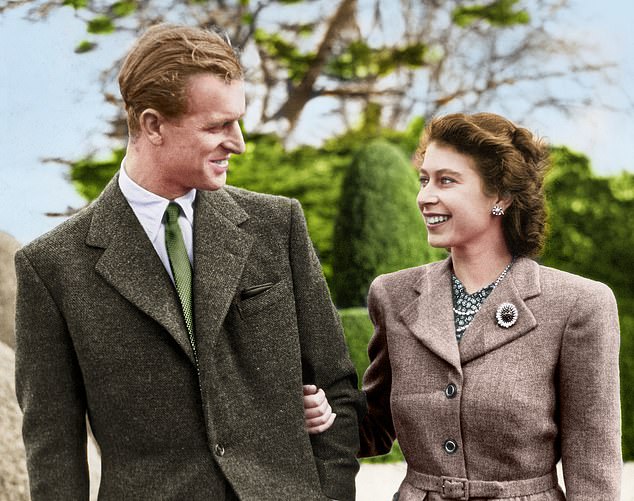 Then-Princess Elizabeth and Prince Philip at the Broadlands, Romsey on their honeymoon in November 1947. She wore the same brooch for the Commonwealth Day celebration 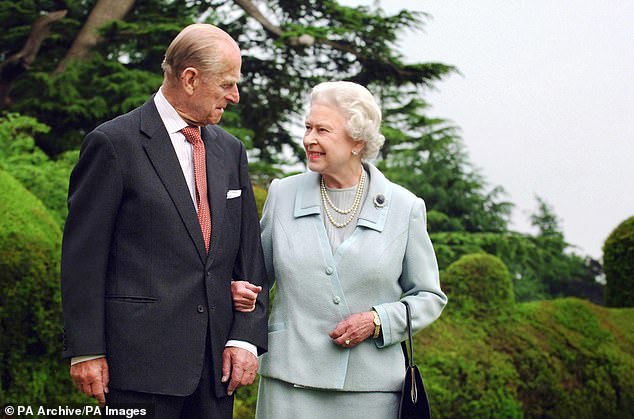 She appeared to be in high spirits (and wearing the same brooch she wore on her honeymoon). Pictured, Queen Elizabeth II and the Duke of Edinburgh on their diamond wedding anniversary

Hence, the timing of both last night’s Abbey programme and the Sussexes’ interview.

And hence the genuine sense of a milestone moment at the Abbey. Can it really be a year since we all had to stop shaking hands and making plans? Have 12 months really passed since we last saw the Duchess of Sussex on British soil? Indeed they have.

Diamonds for her rock

He is never far from her thoughts – especially now as he recovers in hospital from a heart operation.

To prove it, the Queen wore a brooch that she has long associated with the Duke of Edinburgh to deliver her Commonwealth address.

She first wore the diamond and sapphire chrysanthemum in 1947 at the start of their honeymoon, then again when they celebrated their diamond and 73rd wedding anniversaries. It is thought to have been a gift from a shipbuilder after she launched an oil tanker called the British Princess in 1946.

Prince Philip is expected to remain in hospital for the rest of the week, having been admitted on February 16.

However, the sight of an empty Westminster Abbey lent an added poignancy – and relevance – to the Queen’s address.

‘Whilst experiences of the last year have been different across the Commonwealth,’ she told us, ‘stirring examples of courage, commitment and selfless dedication to duty have been demonstrated in every Commonwealth nation and territory, notably by those working on the front line’. There were plenty of examples in a collage of clips from every continent.

We also saw the Queen enjoying the sight of all the Commonwealth flags laid out in Windsor Castle’s St George’s Hall.

Either side of her was her 7ft 2in assistant private secretary, Matthew Magee, and her Master of the Household, Sir Tony Johnstone-Burt – the retired admiral in charge of the small team looking after the Queen at Windsor (or ‘HMS Bubble’ as it is known).

When recording her Christmas broadcasts, the Queen often adopts a slightly wistful tone, mindful that, for some of those watching, it may not be a very joyous day.

Yesterday, however, she appeared to be in high spirits (and wearing the same brooch she wore on her honeymoon – for the benefit, no doubt, of one 99-year-old viewer watching from his bed at King Edward VII’s Hospital, London, where he continues to rest following last week’s surgical procedure).

It was not entirely clear to viewers where the Queen was going so purposefully until she reached the end of St George’s Hall where she sat down at a table to put her signature to her message to the Commonwealth.

In her broadcast, she also celebrated the wonders of the video call, as we saw clips of schoolchildren around the Commonwealth gathered round laptops of all shapes and sizes. ‘It offers an immediacy that transcends boundaries or division, helping any sense of distance to disappear,’ she added.

This is certainly one topic on which there is no division with her grandson. In his recent bus-top chat with comedian James Corden, the Duke of Sussex revealed he had ‘Zoomed’ his grandparents ‘a few times’ (although the Queen does not actually use Zoom but Webex). 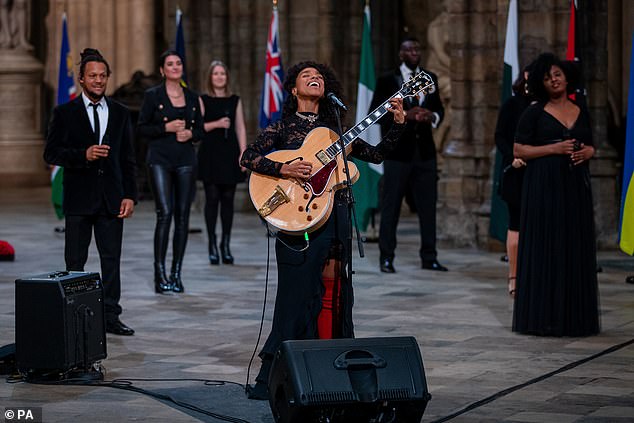 Like Christmas Day, Commonwealth Day is a rare occasion when the Queen speaks in public without the advice of ministers. However, her government will have been delighted to see her putting a strong emphasis on the importance of the vaccine programme.

‘We have also taken encouragement from remarkable advances in developing new vaccines and treatments,’ she said, talking above scenes of people of all ethnicities receiving the Covid jab right around the world.

Last month, the Queen made a very firm intervention urging people to ‘think about others’ and to get vaccinated.

That was very much encouraged by her ministers. Her words followed a warning by the vaccines minister, Nadhim Zahawi, that a disproportionate number of those avoiding the jab were from black and ethnic minority communities.

Here was a reminder – a timely one, given strong indications that the issue of race would feature prominently in last night’s discussion with the Sussexes – that the Commonwealth spans every creed and colour. 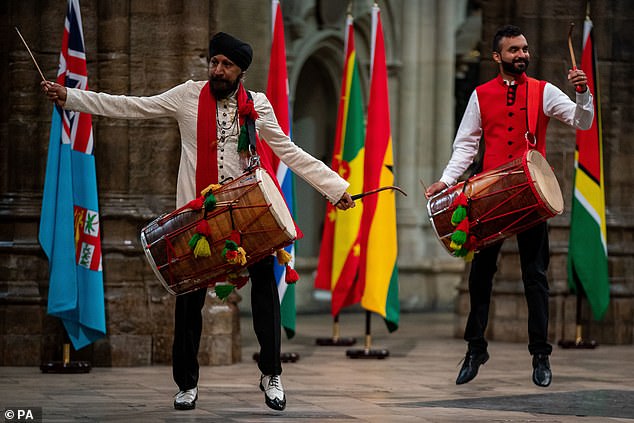 ‘The essence of the Commonwealth is its remarkable diversity, 54 nations whose traditions and talents offer an incomparable richness,’ said the Prince of Wales, delivering the main address from the Nave of the Abbey. That was amply reflected in the music – South Asian dhol drummers playing along to reggae; the New Zealand Youth Choir performing an acapella-cum-haka on a cliff overlooking the south Pacific.

The prince knows the organisation as well as anyone and has been formally chosen as its next head (a non-hereditary position).

The thrust of Charles’ message, however, was to stress the urgency of remedial work on the environment and the Commonwealth’s role at the ‘forefront of global innovation and action’.

This is a big year for what the Queen calls her ‘family of nations’. It hosts a long-delayed summit of all the leaders in its newest member state – Rwanda.

And it is expected to play a key role in the upcoming COP26 world summit on climate change. Many of the world’s most vulnerable states are in the Commonwealth and they expect it to argue their case, especially with Britain hosting COP26.

‘We are uniquely placed to lead the way so let us be the boldest of the bold,’ said the prince.

Oprah it most certainly was not – but none the worse for that.

The Queen’s speech in full

‘Over the coming week, as we celebrate the friendship, spirit of unity and achievements of the Commonwealth, we have an opportunity to reflect on a time like no other.

‘Whilst experiences of the last year have been different across the Commonwealth, stirring examples of courage, commitment and selfless dedication to duty have been demonstrated in every Commonwealth nation and territory, notably by those working on the front line, who have been delivering health care and other public services in their communities.

‘We have also taken encouragement from remarkable advances in developing new vaccines and treatments.

‘The testing times experienced by so many have led to a deeper appreciation of the mutual support and spiritual sustenance we enjoy by being connected to others.

‘The need to maintain greater physical distance, or to live and work largely in isolation, has, for many people across the Commonwealth, been an unusual experience.

‘In our everyday lives, we have had to become more accustomed to connecting and communicating by our innovative technology – which has been new to some of us – with conversations and communal gatherings, including Commonwealth meetings, conducted online, enabling people to stay in touch with friends, family, colleagues, and counterparts who they have not been able to meet in person.

‘Increasingly, we have found ourselves able to enjoy such communication as it offers an immediacy that transcends boundaries or division, helping any sense of distance to disappear.

‘We have all continued to appreciate the support, breadth of experiences and knowledge that working together brings. And I hope we shall maintain this renewed sense of closeness and community.

‘Looking forward, relationships with others across the Commonwealth will remain important as we strive to deliver a common future that is sustainable and more secure, so that the nations and neighbourhoods in which we live, wherever they are located, become healthier and happier places for us all.’