Burberry’s £11m man: British fashion veteran Jonathan Akeroyd set for huge sum when he takes helm in April after being poached from Versace

The new boss of Burberry could scoop £11million in his first year in charge having been poached from Versace to lead the British fashion giant.

Jonathan Akeroyd – who ran Alexander McQueen for 12 years before taking over at Milan-based Versace in 2016 – will succeed Marco Gobbetti as Burberry chief executive in April.

The 54-year-old Briton will get a £6million golden handshake on arrival to make up for the bonus and shares he will forfeit by leaving Versace.

He will also earn an annual salary of £1.1million and a maximum bonus of £4million – meaning he could take home £11.1million in his first year in charge.

The figure is in keeping with the huge sums paid to Burberry’s past chief executives. 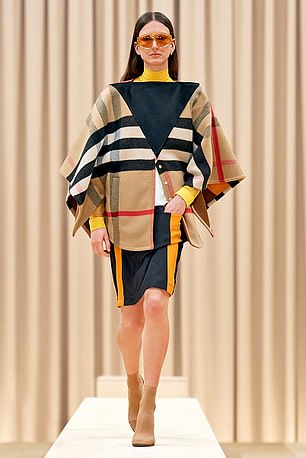 Burberry shares rose 2.3 per cent on news of Akeroyd’s appointment

The highest earner of recent years was Angela Ahrendts, who took home £10.9million in 2010, and £62.9million in total over her tenure.

Burberry also said Akeroyd will continue to pocket a controversial ‘cash allowance’ worth £50,000 a year.

He is the only chief executive of a major British company to get a handout to spend on whatever he wants.

Akeroyd said: ‘I have long admired Burberry’s position as the most iconic British luxury brand and I have a deep affection for its storied heritage.

‘I am looking forward to returning to London where I first built my career with ambitious plans for the future.’

Versace’s owners noted the appointment would enable him to be with his family in the UK. 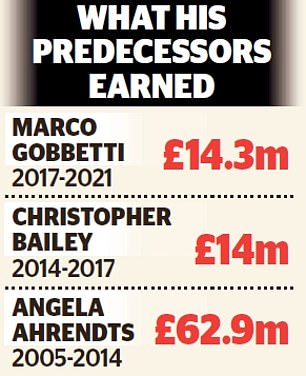 Before working for Alexander McQueen, he held senior fashion roles at Harrods, the luxury department store in London.

The market reacted positively to the new appointment, with Burberry shares rising 2.3 per cent, or 42.5p to 1872.5p.

Danni Hewson, at AJ Bell, said Akeroyd was an ‘experienced operator in the fashion market’, adding: ‘He’s got the thumbs up from the market.’

It followed the surprise announcement by Gobbetti in June that he would step down by the end of the year to move to Ferragamo.

Akeroyd will be charged with boosting sales following a period when Gobbetti took Burberry further upmarket and brought the brand to a new generation of young, wealthy shoppers using new digital marketing techniques, including tie-ups with video games.

He slashed discounting and focused on social causes close to the heart of the younger generation.

This included signing a charity tie-up with footballer and anti-poverty campaigner Marcus Rashford. It also launched a new campaign with celebrity model Kendall Jenner this year.

Akeroyd faces challenges in Europe and the US, which have taken less readily than Chinese customers to Burberry designer Riccardo Tisci’s more urban and sporty designs.

The risk posed by further Covid variants could disrupt Burberry’s plans, although its strategy to target consumers in hyper-localised campaigns helped the brand perform well in the latter part of the pandemic.

Signs of a slowdown in China have also dragged down Burberry’s share price, as well as other high fashion rivals.