Burger chain Grill’d have announced their rabbit burger is back

A popular burger chain has sparked a social media storm after announcing it will be releasing a ‘bunny burger’ just in time for Easter.

Ignoring the heat the company received last year for putting rabbit on the menu, Grill’d are suggesting that the controversial burger will be back.

‘The hunt is on. But not for Easter eggs. We’ve got our sights set on something un-fur-gettable,’ the company said in a Facebook post.

‘Our Bunny Burger is back. You’ll need both hands for this kind of rabbit food. Hoppy Easter.’

Last year the gourmet burger included a rabbit patty, blended with pork and duck topped with lettuce, carrot and onion.

They were available at select stores for $13.50.

Vegan and vegetarian customers have taken to social media to express their disgust that the company is putting the rabbit patty back on the menu.

After announcing the ‘bunny burger’ was back over Facebook the post quickly went viral with over 500 shares and thousands of comments.

‘This is absolutely disgusting. I understand you have to put out product and that the world isn’t vegan (sadly), but to market it this way is BEYOND repulsive,’ one user wrote. 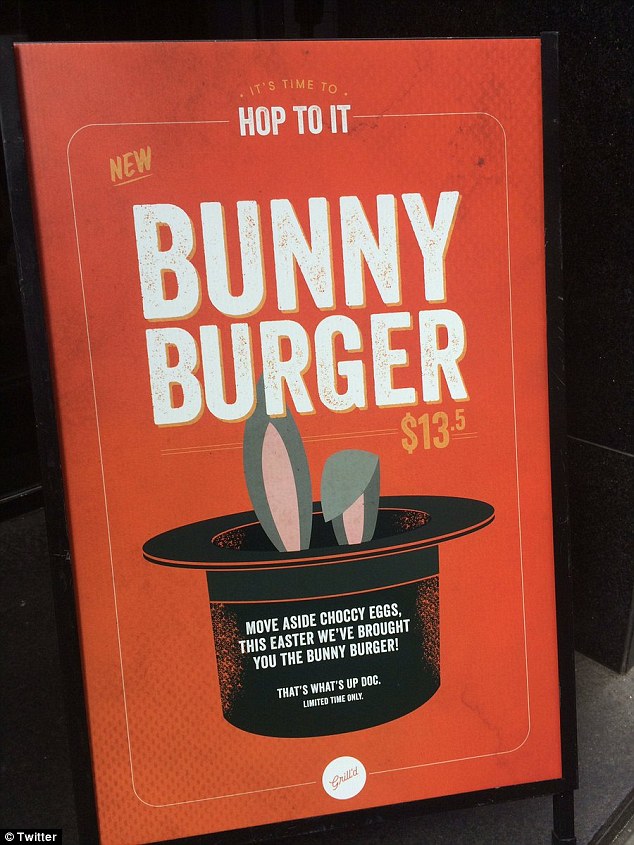 Last year the burger was available last year for $13.50 at select stores

‘Ignorance is bliss isn’t it?! If you’re offended by realising where a rabbit burger comes from please remember food does not magically appear nor does it come from the grocery store,’ wrote another.

‘Dear Grill’d, take your bunny burger and Hopp Off. I wouldn’t set foot in your establishment if you paid me,’ wrote another.

Last year the burger chain said that the rabbit meat was sourced ethically and came from Alpine Game Meat and Macleay Valley Rabbits in NSW.