Andrei Makara, 40, attacked and raped a woman after he broke into her house in Brent, north west London on July 24

A 40-year-old man who cut his hand breaking into a house has been convicted of raping a woman inside the property who offered to help with the wound.

Andrei Makara, 40, of no fixed abode, pleaded guilty to two counts of rape, as well as sexual assault and one count of robbery.

Harrow Crown Court heard the man broke into the house in Brent at 10.40 on July 24 while the victim was in the bathroom.

The woman, 31, head a large bang and downstairs and went down to investigate, when she was confronted by the man who was struggling to force his way through the front door.

Makara barged through the door with his shoulder as the woman attempted to lock it.

In an effort to appease Makara, the woman offered to bandage his hand, which had been injured during the break-in. She also decided to hand over her bank card in exchange for her safety.

He then picked up a scissors and raped the 31-year-old woman.

Later, Makara started threatened the victim and said he would kill her if she gave him the wrong pin number.

The attacker then stole a bicycle which belonged to the woman’s husband and fled from the scene. 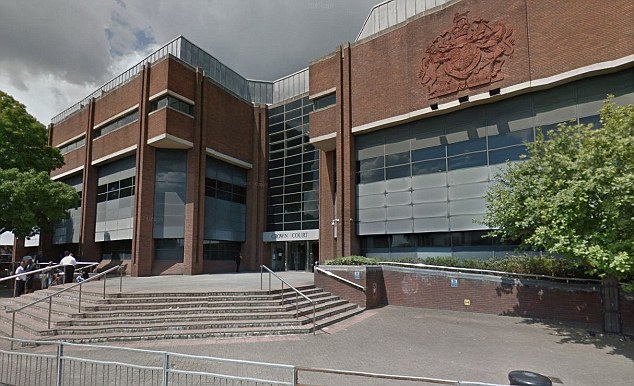 Makara will return to Harrow Crown Court, pictured, for sentence on September 26

The victim reported the robbery to police on the day of the attack and then said she had been raped two days later.

She was interviewed by detectives from the Met’s Child Abuse and Sexual Offences Command.

Makara will be sentenced at Harrow Crown Court on September 26.

Detective Constable Alan Wong from the sex crimes unit said: ‘I would like to commend the victim for her bravery and having the courage to report the incident to the police.

‘Her evidence was vital in ensuring a dangerous individual has been brought to justice.

‘Understandably she has been left deeply traumatised, even having to move house within days. I hope today’s conviction will give her some measure of comfort and closure.’