Two burglars were today jailed for 34 years each for the murder of a high-flying businessman after they broke into his £1million house, blasted him with a shotgun as his husband watched in horror, and then made off with £125,000 worth of valuables.

The devoted couple of 12 years were woken from their sleep when masked Downton and Baccus smashed their way into the property around 3am and then forced to lay on their bed at gunpoint as precious goods were bagged.

High-end designer jewellery including Cartier watches and a Tiffany’s necklace were bagged as Baccus threatened the terrified pair, saying: ‘We will shoot you if you don’t do what we say.’

And when Mr Hedger-Cooper triggered a panic alarm the burglars fired their weapon, hitting the naked and helpless Mr Hedger.

The 61-year-old marketing executive’s lkast words to his husband were ‘I think I’m going to be OK’ – moments before he died of blood loss while sprawled on their bedroom floor in agony. 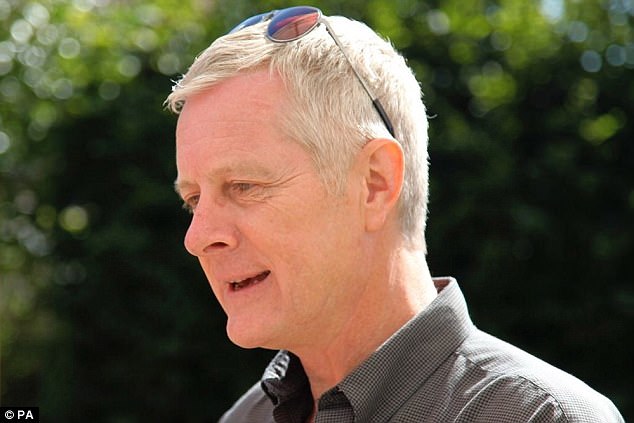 Mr Hedger (pictured), 61, was ordered to help the attackers with a code to a safe and as Mr Hedger-Cooper, 48, tried to assist him he pressed a concealed panic alarm in the bedroom 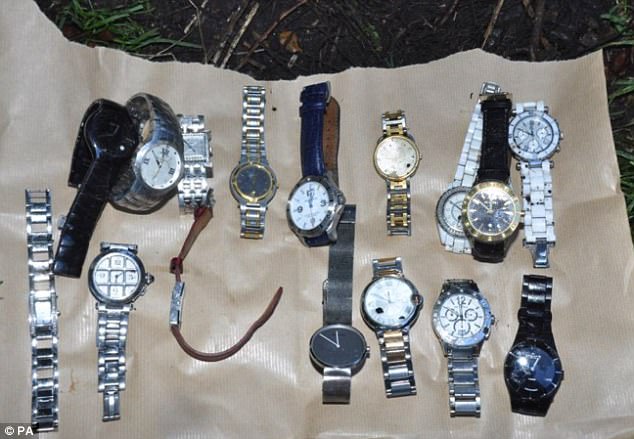 High-end designer jewellery including Cartier watches and a Tiffany’s necklace were bagged as Baccus threatened the terrified pair, saying: ‘We will shoot you if you don’t do what we say’ 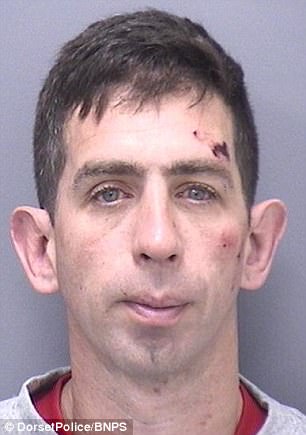 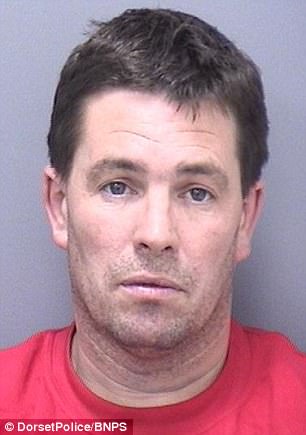 Today at Winchester Crown Court, Downton and Baccus were convicted of murder, aggravated burglary and possession of a firearm with intent to cause fear of violence. They were jailed for at least 34 years.

Sentencing the pair, Mr Justice Jay, told them that ‘it was a series of elementary but stupid decisions that led to your arrest’.

He added that the planning of the raid ‘was amateurish and incompetent but that doesn’t diminish the culpability of what happened.

‘You may have been out of your own depths, that was your decision, but the risk of taking a loaded gun into someone’s bedroom was evident to you as to anyone.

‘The tragedy was on the cards.’

Speaking to Downton, he added: ‘You have a cold, callous streak and show no remorse.’

And to Baccus, he said: ‘I would not describe you as ruthless but I have seen no signs of remorse from you.’

In a victim impact statement read to the court, Mr Hedger-Cooper, 48, said that he was devastated at his death.

He said: ‘Guy was an intelligent, creative, caring and gentle man.

‘Guy’s life was lived to the full, he worked hard and he played hard. He enjoyed sport, he was a talented artist who drew his inspiration from the sea and the places he had lived and worked.

‘Although working for large corporations, Guy could never be called corporate.

‘This is all in stark contrast to the final moments of Guy’s life, which were full of terror, fear and pain.

‘No-one deserves to have their life ended in such an abrupt way. I pray that he is now at peace.

‘The events of that evening have radically changed my life forever and are an experience from which I shall never recover.

‘To lose the person you have loved and cared for over many years is devastating whenever that moment comes, but losing that person in these tragic circumstances, in front of you, in your own home, is horrific and makes the pain unbearable.

‘A crime that cut his life short in the most violent and callous way. A crime that was fuelled solely and simply by greed.

He added that Mr Hedger would also be remembered for his work, which included designing a green heart sculpture outside the LV insurance building in Bournemouth.

After sentencing, John Montague from the Crown Prosecution Service, said: ‘These men planned to break into Mr Hedger’s home and steal high-value items. Kevin Downton was armed with a sawn-off shotgun.

‘The defendants denied murdering Mr Hedger but the CPS was able to paint a clear picture for the jury demonstrating how the men planned the crime. The evidence put forward by prosecutors showed it could only have been them who were involved.

‘It did not matter who pulled the trigger as both defendants were aware a gun had been taken to the address and was likely to be used if the burglary did not go as planned.’

Mr Hedger, 61, was ordered to help the attackers with a code to a safe and as Mr Hedger-Cooper, 48, tried to assist him he pressed a concealed panic alarm in the bedroom. 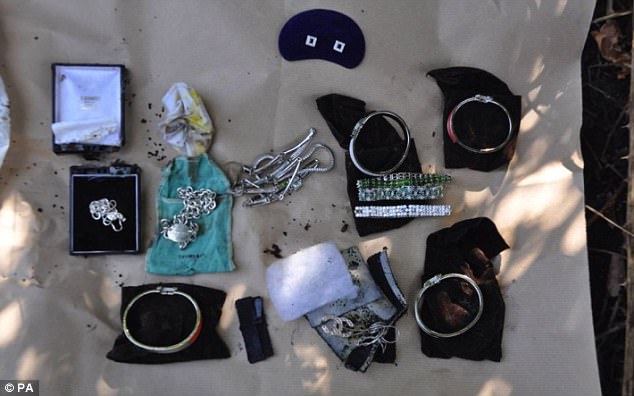 Items of jewellery stolen that were recovered from undergrowth at the side of a footpath leading from Brook Road, Bournemouth, known locally as the ‘Kissing Gate’ 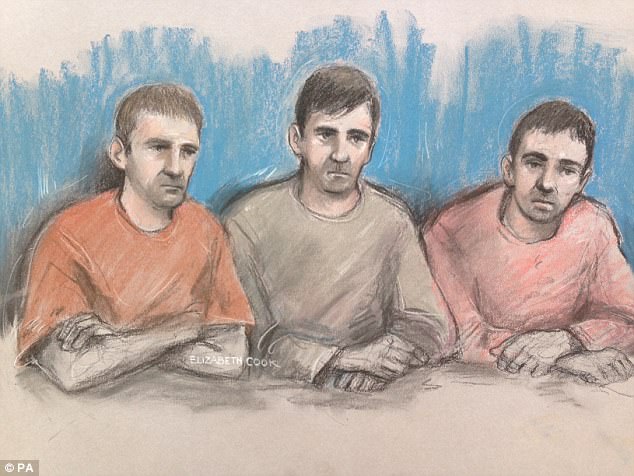 Court artist sketch dated from May last year, by Elizabeth Cook, of (left to right) Scott Keeping, Jason Baccus and Kevin Downton in the dock at Winchester Crown Court

A loud alarm rang out and lights began flashing moments before Mr Hedger, who was standing naked and helpless, was shot at near-point blank range with the sawn-off shotgun by Downton.

Downton, 40, and Baccus, 42, fled the luxury detached property in the quiet Dorset village of St Ives, near Ringwood, and took £125,000 worth of watches, jewellery and bags in the early hours of April 13 last year.

The pair ‘callously’ took with them the couple’s landline telephone and an iPhone, meaning Mr Hedger-Cooper could not use it to phone emergency services, in an attempt to to ‘buy a few precious moments in their escape’.

Mr Hedger-Cooper desperately called 999 using his mobile and tried to comfort Mr Hedger, who tragically told him ‘I think I’m going to be okay’ moments before dying.

Scott Keeping, who also faced the same charges and was said to have been sat in a car outside Mr Hedger’s home during the time of the murder, was cleared of all charges. 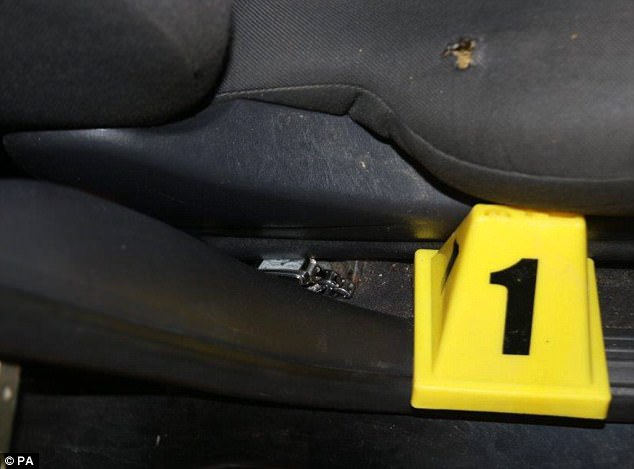 An Amadeus watch that was found in a Ford Focus, used by the burglars, located in Forsyth Gardens 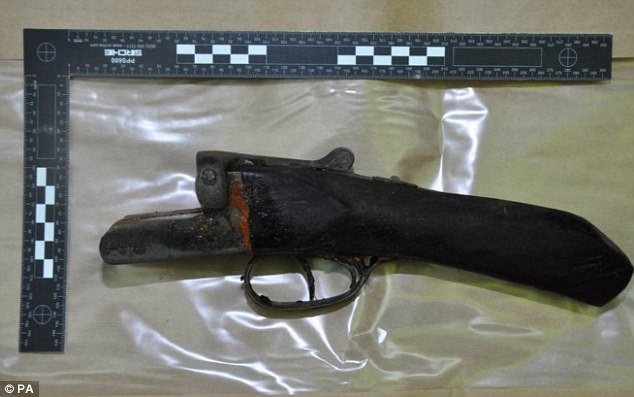 Jurors spent over 20 hours deliberating their verdicts, which were unanimous. Baccus and Downton showed no reaction when the verdicts were read out, however Keeping celebrated when he was cleared.

During the trial, which started in mid-November last year, jurors heard stolen valuables were found in nearby bushes and in the flat where Baccus lived with Mr Keeping, 44.

A ‘high level’ of gunshot residue was found in a snood used by Downton hidden in his Vauxhall Astra, and DNA from a cigarette placed Baccus at the scene.

Mr Hedger, a marketing director at LV Insurance, died from blood loss as a result of the shooting, which was aggravated by his pre-existing heart condition.

Mr Hedger-Cooper’s harrowing 999 call made as his husband lay dying on the floor was played in court. Mr Hedger-Cooper is audibly distressed and Mr Hedger can be heard groaning in pain, pleading for an ambulance. 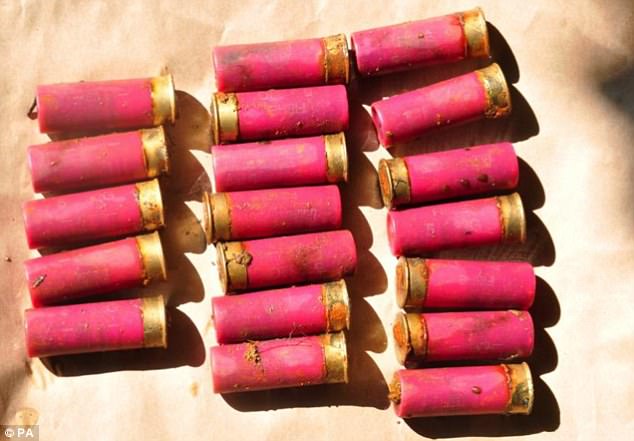 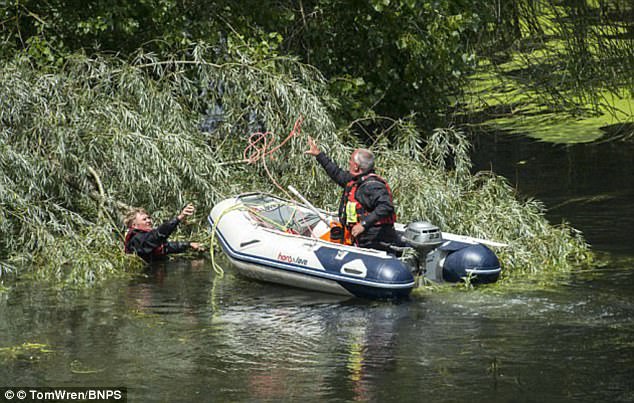 Mr Hedger-Cooper struggles to get his words out at several points during the recording but tells the operator his husband has been shot by ‘two men who broke in with a shotgun’.

At this point Mr Hedger can be heard groaning in the background and can be heard to say: ‘Call an ambulance.’

Mr Hedger-Cooper also said: ‘Two people broke in wearing masks, they were balaclavas. They came through the window.’

Mr Hedger-Cooper recalled the terrifying murder in an interview played to the court.

He said: ‘Louis [their pet dog] woke up and was barking which I think was about 2.50am – Guy got up and I stayed in bed.

‘The next thing I know Louis came running in and so did Guy. A few seconds later two masked men came in. 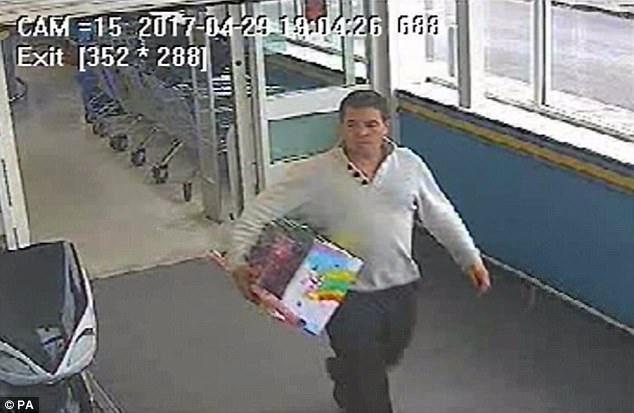 CCTV clip of Kevin Downton at Toys R Us in Poole on April 29, 2017 where he purchased wrapping paper and a gift for his daughter’s birthday. Downton used the fact he went shopping as part of his defence as he denied the murder 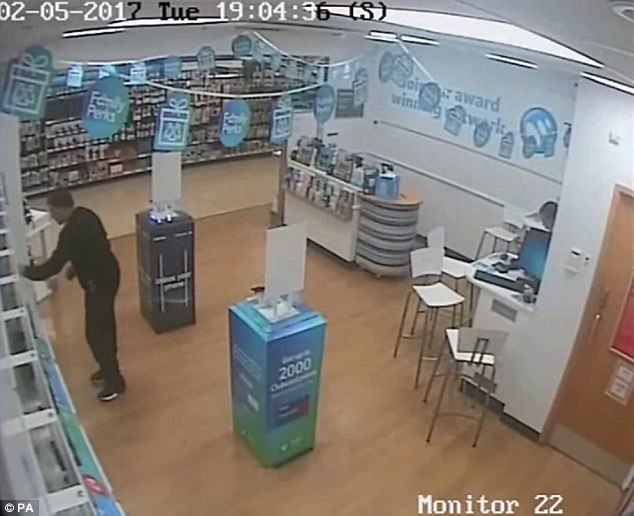 CCTV of Downton buying a mobile phone at Tesco Tower Park in Poole on May 2, 2017. The video was in court material shown to the jury in the Guy Hedger murder trial at Winchester Crown Court 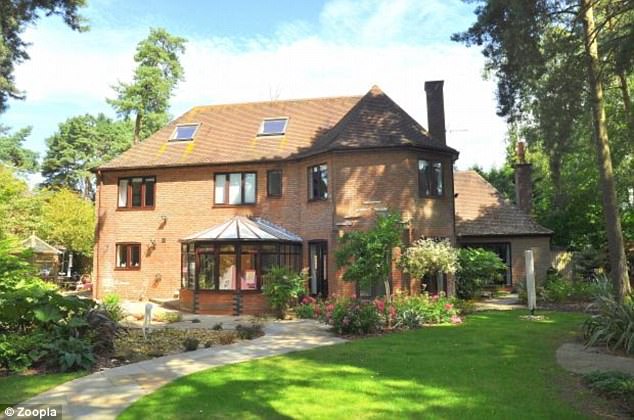 ‘They were wearing black clothes, both had balaclava masks on, one was holding a gun which I think was a sawn-off shotgun and the other had two bottles of champagne which I presume he took from our wine rack in our garage.

‘He said ‘lie on your front on the bed and face the wall’, we did that and Louis was shaking badly in the middle of us and Guy was breathing quite badly.

‘He had a bad heart attack previously and only 30 per cent of his heart works, he had a pace-maker fitted for it. We were holding hands in the bed, Guy took my little finger to try and reassure me.

‘One was standing by the bed and the other was going through the dressing room, I heard a zip from a bag which I believe was the Louis Vuitton bag. I could then hear them going through drawers and jewellery. They were ransacking things.

‘I had got up to help and as I went around the bed I passed our TV – next to it is a panic button.’ 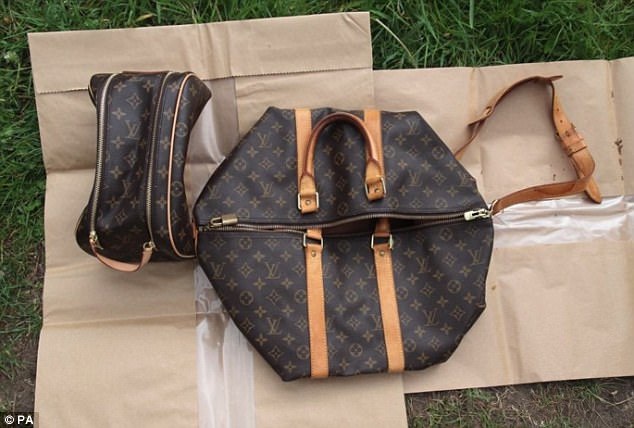 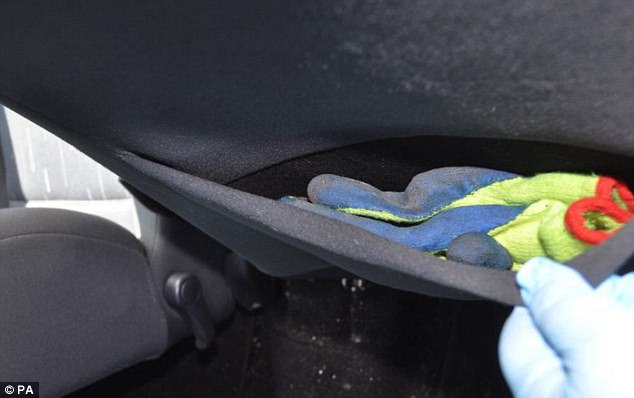 Gloves found in a seat pocket inside a Renault Clio previously used by Scott and Helen Keeping and Jason Baccus that was located in Lydford Gardens, Bournemouth, on May 5, 2017 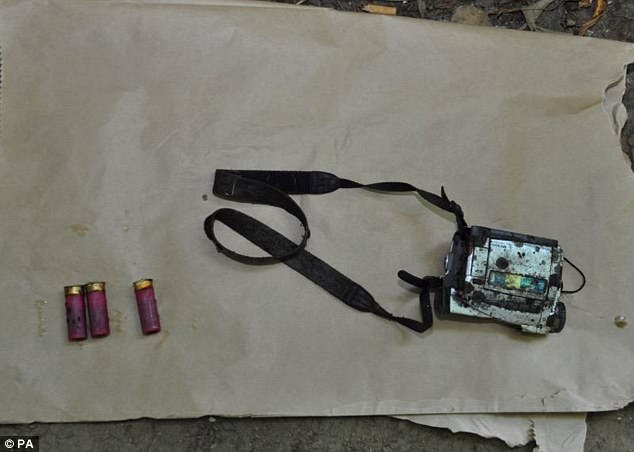 Mr Hedger-Cooper, clearly very emotional, fought back tears as he continued: ‘And then, stupidly, I thought it was best to press the panic button.

‘At this time I didn’t really know what was happening, I didn’t know anything about guns or if he would use it but at the same time I thought they do these sort of things and end up shooting you anyway.

‘The alarms went off and lights started flashing, I heard an almighty boom and Guy said ‘I’ve been hit, I’ve been hit’. He fell to the floor and was lying by the side of the bed.

‘I asked if Guy was okay and reached to get my iPhone but it was missing so I went downstairs to call 999 with the phone there.

‘I was talking to Guy and he said ‘please call an ambulance’ and I told him that I had. Guy said to me ‘I think I’m going to be okay’ and I gave him a throw pillow from the bed.’ 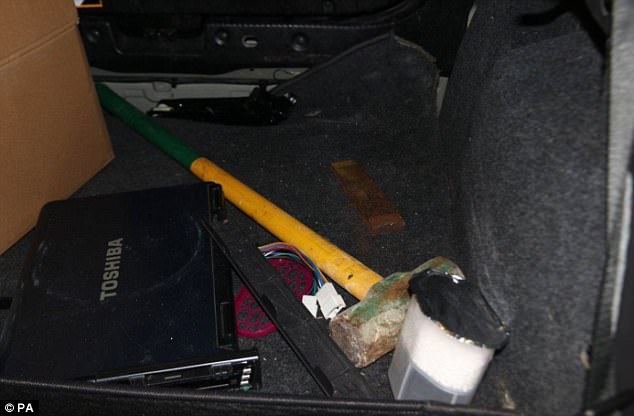 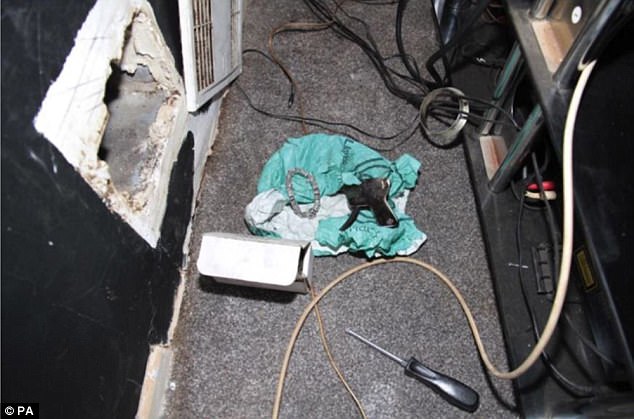 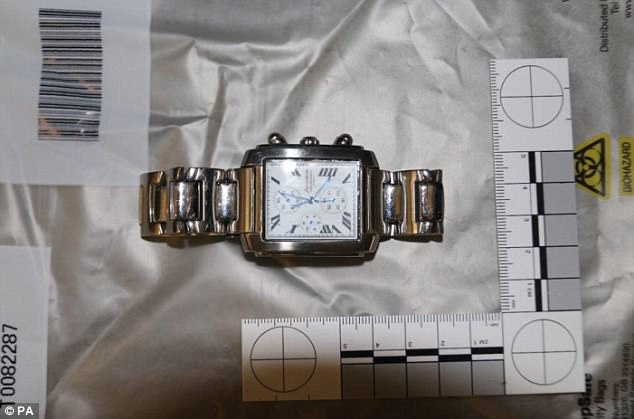 Mr Hedger-Cooper, who had remained fairly composed throughout the interview, then broke down into floods of tears as he recalled the moment police told him ‘Guy had not made it’.

Keeping’s wife, Helen, 40, was today cleared of two counts of assisting an offender. The prosecution had argued she concealed property and provided an alibi for her husband.

The court heard Keeping and his wife, who lived with Baccus in Bournemouth, Dorset, were both drug users and at the time of the murder at home drunk through alcohol. Downton, of Winterborne Stickland, Dorset, is a father and also a drug addict. 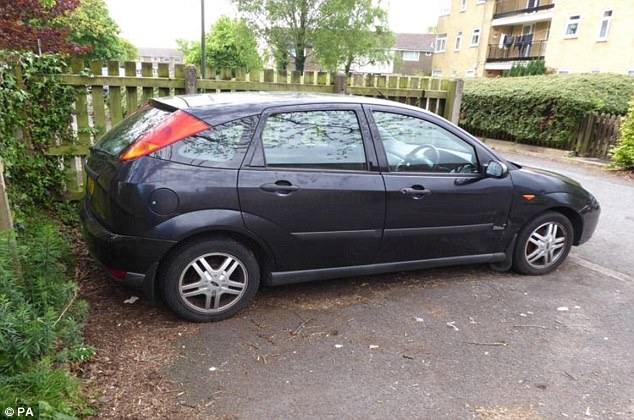 Pictured is a Ford Focus, which contained a number of valuables including an Amadeus watch

Downton and Baccus were also convicted of burglary after the court heard they broke into a nearby industrial site and stole goods. They had previously admitted another count of burglary in relation to another robbery at the same industrial site.

Keeping denied both these charges of burglary and was today cleared.

The pair convicted of murder all denied any involvement in the incident and will be sentenced this afternoon.