A woman has revealed how burlesque dancing helped her find her inner confidence and let go of her body hang-ups.

Lyndsey Buckingham, 32, from Northamptonshire, trained in theatre school in the hopes of one day becoming a film director, before stumbling across a burlesque show in her early twenties and instantly knowing it was her career calling.

After befriending a group of burlesque artists and taking classes – and creating an alter ego to get over her initial stage fright – Lyndsey landed her own gig aged 22 at the famous former cabaret club Madame Jojo’s, which kick-started her career.

Lyndsey Buckingham, 32, from Northamptonshire, known on stage as Banbury Cross, has revealed how burlesque dancing helped her find her inner confidence and let go of her body hang-ups. (Seen at Ibiza’s prestigious ‘Lio’ cabaret club where she has a residence as the main act) 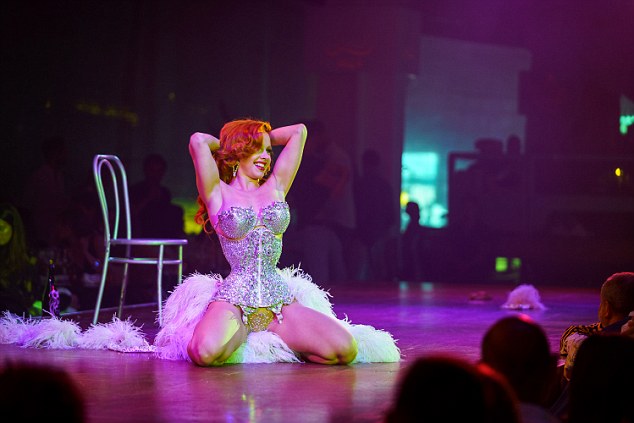 She trained in theatre school in the hopes of one day becoming a film director, before stumbling across a show in her early twenties and instantly knowing it was her career calling- she now captures her audience’s attention in glitter-embellished dramatic corsets with fishnet stockings and feathers

Now known by her stage name Banbury Cross, she has toured the world and is currently the main act at Ibiza’s prestigious Lio club, the most expensive on the party island.

When a British version of the club opens next year, Lyndsey will come back to where her career first began.

And despite initially battling stage fright at the thought of taking her clothes off on-stage, she says creating a ‘persona’ helped her overcome any jitters, and she is now more body confident than ever – even branding burlesque a form of feminism due to the way it has allowed her to ‘own’ her body.

Speaking exclusively to Femail about the beginning of her journey, she admitted to finding it scary to take her clothes off in front of a room full of strangers at first.

‘At the beginning it wasn’t the easiest and I would always be a little frightened before I went out on stage,’ she says.

‘However because of my theatre training I was able to create a character to make it a little less scary.’

Explaining that despite her skimpy stage ensembles she hasn’t always been body confident, she said: ‘Of course every woman has their body hang-ups, especially if they do not fit into a mould that they feel society wants them to fit into.

‘But I know I am unique and beautiful in a way that only I know how to be. I hope to inspire the same positive body attitude when I am on stage and in my daily life.’

And ten years of successful international performances under her belt have helped Lyndsey let go of any insecurities. 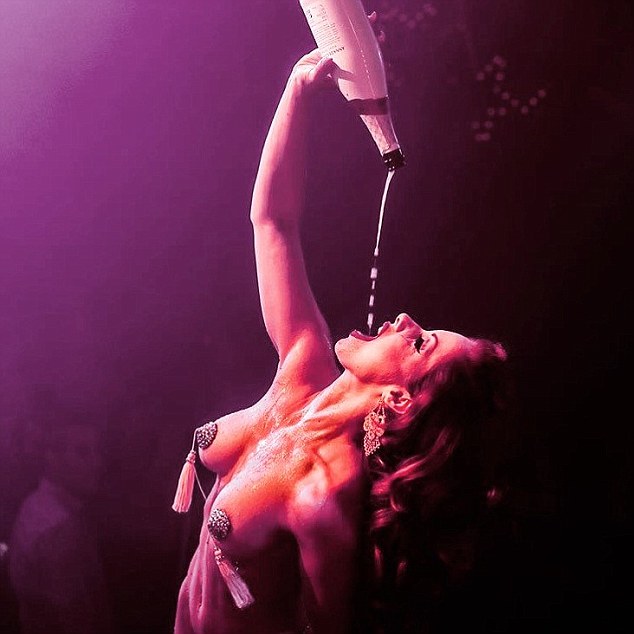 The dancer’s latest act sees Banbury Cross performing a sensual dance which leaves her in nothing but nipple tassels and heels, before she pours a bottle of champagne over herself in front of an enthralled audience

‘As time has gone on, I no longer have the need for this character and am now totally at ease with myself.

‘Burlesque came very naturally to me, and felt like a perfect expression of my creativity. I loved the comedy, theatricality, sensuality and the femininity.

‘It represents women owning their bodies, taking no prisoners, and never apologising for being themselves.’

Banbury Cross’ latest act sees her takes to the stage dressed in ensembles reminiscent of Marilyn Monroe with a dash of Jessica Rabbit, favouring glitter-embellished dramatic corsets with fishnet stockings and feathers, and wearing her hair in Hollywood-inspired retro waves.

The dancer’s show sees her performing a sensual routine which leaves her in nothing but nipple tassles and heels, before she pours a bottle of champagne over herself.

Explaining how her hobby transitioned into a career, she adds: ‘I did a lot of research, saw as many shows as I could, and made friends with burlesque artists I would meet at events.’ 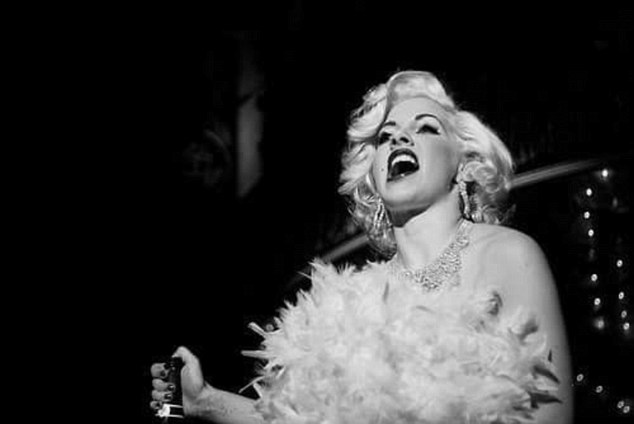 Dressed in outfits reminiscent of Marilyn Monroe with a dash of Jessica Rabbit, she often uses  just a chair as her prop, relying heavily on her natural connection with the audience instinct for timing her seductive moves perfectly to her music 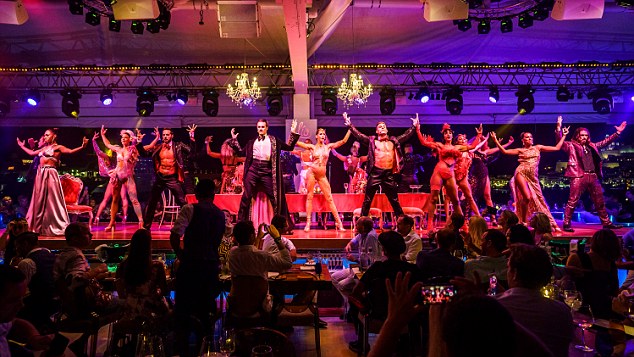 And while spending her life moving around the world has been exciting, Lyndsey – who is the main act amid the talented artists seen above who perform at the prestigious Ibiza cabaret club, admitted that communication can be a challenge

Surprised at how welcoming the industry was, she continued: ‘I was quickly amazed by the strong sense of community and support among these women and I seemed to find my place very easily among them. After landing my debut at Madame Jojo’s my career snowballed, 10 years later here I am.’

But despite her career taking off in the capital, she admits: ‘Living in London was the time of my life, it shaped me as a performer but I knew that if I wanted to find myself and find success as an artist I would need to leave the London race, stop feeling comfortable and feel the fear.’

The burlesque act itself is only five minutes and so isn’t enough alone to keep me in shape but I enjoy training, eating well and keeping a positive mental body image…

Her path to success wasn’t all plain sailing, with Lyndsey battling a competitive market inundated with talented dancers and few well-paid opportunities.

‘Being self-employed can be tough, especially when you’re in artist in an industry that is over-saturated and with not a enough well paid opportunities,’ she says.

Being on the road has its negatives too: ‘I have been to over 50 countries in the past five years alone. But the one downside to travelling so often is not having a sense of where home is.’

Describing her job as a ‘one woman theatre company’, Lyndsey explained that she is a performer, seamstress and her own manager.

‘I deal with all of my own bookings, negotiations, most travel arrangements, networking, and self promotion. But most of all I am an artist, creating a fantasy on stage that transports an audience back in time to another era. 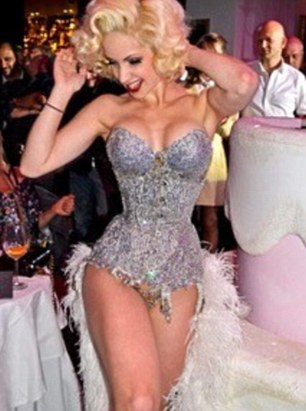 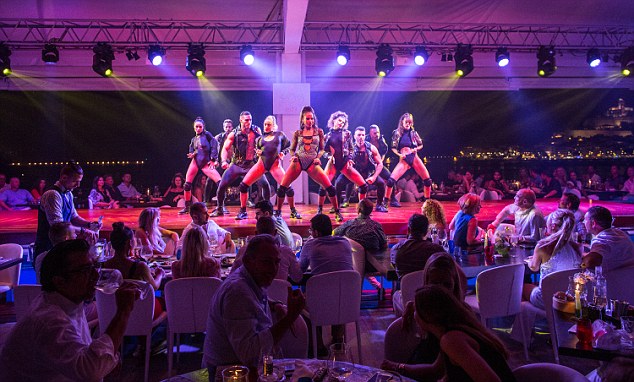 Describing her job as a ‘one woman theatre company’, Lyndsey explained that she is a performer, seamstress and her own manager- and loves sharing her stories with fellow dancers (seen performing at Lio above)

Speaking about how she keeps her ‘stage’ body in shape, she added: ‘Navigating the tube with a 20kg suitcase with no elevators kept me very fit!

‘The burlesque act itself is only five minutes and so isn’t enough alone to keep me in shape but in my everyday life I enjoy training, eating well and keeping a positive mental body image.’

Explaining that not everyone can be a burlesque dancer as it takes ‘an attitude that cannot be faked’, Lyndsey slammed the negative stereotypes surrounding her profession. 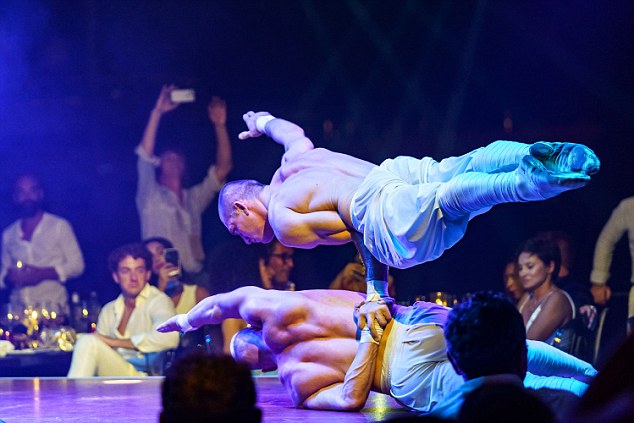 ‘The biggest issue still is that people assume that is because you take your clothes off on stage that you’re a ‘just a stripper’, often making assumptions without being informed because you own your body, with your rules.

‘Burlesque is a beautiful artistic incarnation of the strip-tease art form.’

Revealing her favourite career moments, she concluded:  ‘I would say living and working in Shanghai for a year as a burlesque artist in a night circus definitely comes in close second to my current act.

‘And meeting Dita Von Tease earlier this year was both incredible and terrifying at the same time, especially because I admire her so much as a woman, as an artist, glambassador and colleague. She is a true inspiration.’

Lio London will be at The London Cabaret Club for six weeks from 21st February until 30th March 2019. 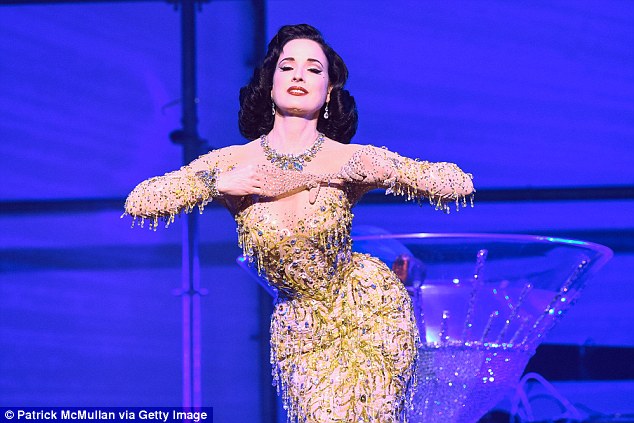 Meeting burlesque star Dita Von Teese has been one of Banbury Cross’s career highlights, and she counts her as a ‘true inspiration’