Burning Man 2019 kicks off this weekend and promises to be the biggest yet – despite claims that it’s lost its edge and is only for the rich.

The festival in the Nevada desert offers a myriad of events, giving the 80,000 raging festival-goers countless options during the nine-day event.

Burning Man even offers Alcoholics Anonymous meetings multiple times a day for those substance-free folks at the notoriously drug-filled event.

And despite claims that the festival is only for the wealthy, with tickets starting at around $450, events are offered that appeal to everyone – including families.

Burning Man 2019 kicks off this weekend in the Nevada desert, running from August 25 to September 2 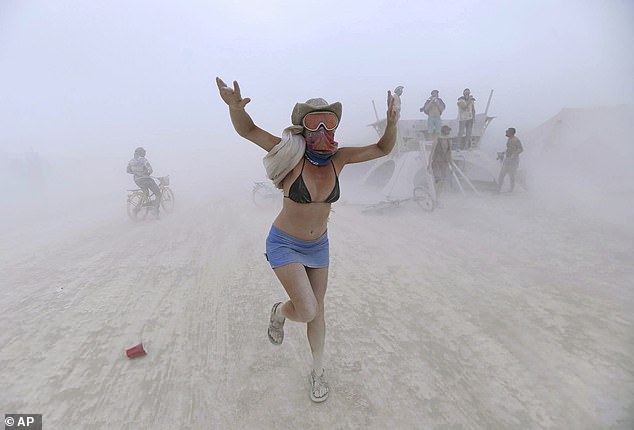 Visitors to the artistic showpiece, which prides itself on ‘radical self-expression’, are known for posing nude in the desert, dressing in extravagant costumes and setting sculptures of humans alight.

Art installations, music, free classes, costumes, sharing of love, opinions, food and discussion is the order of the day at Burning Man.

The festival is filled with what sounds like X-rated events for 18+ guests, including ‘Pu**y Worship Altar’, ‘Consesual Non Monogamy Workshop’, ‘Sexual Aggression and Dominance with Consent’ and ‘Nipple Chillzz’ to name a few.

Festival-goers can even tie the knot on site in the ‘Get Hitched, Elvis Style’ event.

While there are many X-rated events, up to 2,000 children are expected to attend and organizers are putting on family-friendly events such as an Intergalactic Family Dance Party and Intro to Children’s Literature.

For the tech-savvy individuals, a coding workshop and Bitcoin event are also offered.

And for a calming experience, there a multiple yoga sessions throughout the day, a journaling station, meditation workshops, tea ceremonies and ‘heart mending’.

The first Burning Man celebration took place in 1986 in San Francisco, when artist Larry Harvey burned a 9ft wooden sculpture of a man on a beach to mark the summer solstice.

In 1990 the festival moved to Nevada’s Black Rock desert, where a steampunk city pops up every year, and has inspired copycat events around the world. 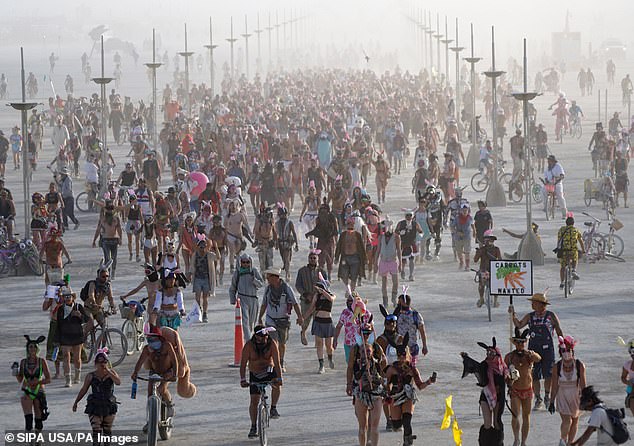 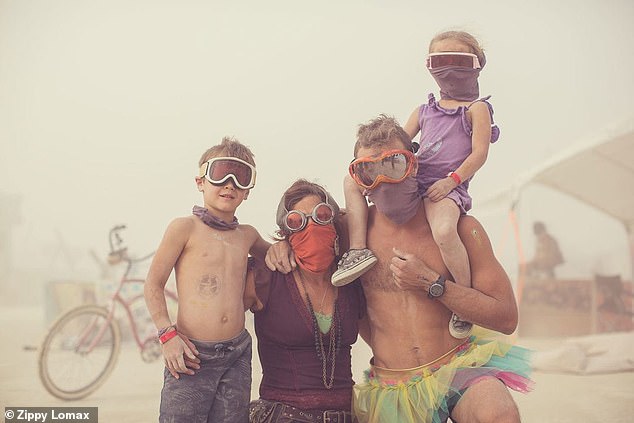 The nine-day festival will see about 800, 000 people attend with about 2,000 children with some family-friendly events

Earlier this year, Burning Man’s CEO announced a ban on an elite campsite costing up to $100,000 while slamming social media influencers in the wake of the Fyre Festival disaster.

Camp Humano was invited back in 2019 after offering accommodation starting at $25,000 for a 160 square foot ‘Single Bedouin Tent’ with minibar and air conditioning, according to a price list seen by Mashable.

Those prices reportedly went up to $100,000 for two bedrooms, a private bathroom, and ‘super-powerful’ AC in rooms dubbed a ‘Moon Village’ and comes amid reports of a rise in wealthy Silicon Valley festival goers, including Google exec Eric Schmidt.

The regional events include AfrikaBurn, held at Stonehenge Private Reserve in South Africa, and MidBurn in the Negev Desert in Israel.

Earlier this year the U.S. Bureau of Land Management recommended that attendance be capped at the existing 80,000 level for the next 10 years. 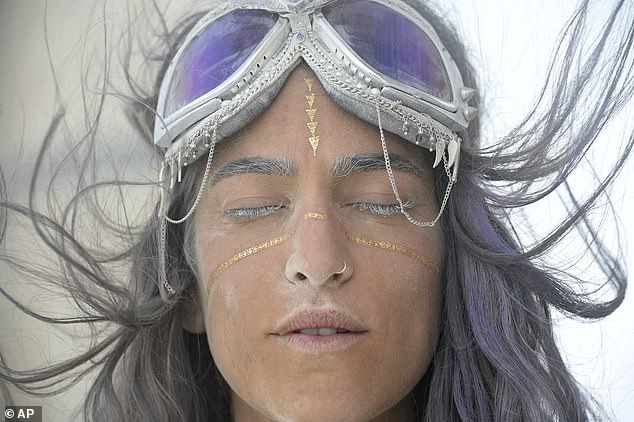 In a mission statement on its website promises the festival ‘will bring experiences to people in grand, awe-inspiring and joyful ways that lift the human spirit’

As the event has grown from a few hundred to tens of thousands of attendees, the increased vehicle and foot traffic has led to more frequent dust storms.

A mission statement on its website promises the festival ‘will bring experiences to people in grand, awe-inspiring and joyful ways that lift the human spirit’.

Organizers say they hope to ‘address social problems, and inspire a sense of culture, community, and civic engagement’ through the event.

Attendees are expected to abide by Burning Man’s 10 core principles, which include ‘radical inclusion’, ‘radical self-reliance’ and ‘radical self-expression’.

They are also supposed to ‘leave no trace’ after they pack up and go home.

However, after last year’s event a partially reassembled airplane which had been a main attraction was spotted lying abandoned in the Black Rock Desert weeks later.

MOST BIZARRE EVENTS AT BURNING MAN 2019

Pu**y Worship Altar: The Pu**y Altar was built to provide a safe and kinky place of worship for all those who would like to praise the almighty pu**y

Get Hitched, Elvis Style!: Playa weddings for the nuptially needy, EWC welcomes individuals, couples, trios and other configurations without regard to race, religion, sexual orientation, gender identity, species or any other limiting factor

Consensual Non Monogamy Workshop: Breaking away from the idealized and normative relationship, consensual non-monogamy can bring opportunities to explore your sexuality and create fulfilling relationships.

Rebirth Yourself (clothing optional): Come (un)dressed to your level of comfort. Shed energetic layers via breath, meditation, and intuitive movement. All bodies welcome!

The Birthing Canal: Enter the womb dome, squeeze through the canal, and get spanked on the other side (with consent). Welcome to the world, you’re reborn.’