Tottenham leapfrogged Burnley in the table courtesy of a dominant victory at Turf Moor where Harry Kane hit his seventh Premier League hat-trick.

Spurs, who are now up to fifth, started quick and were ahead inside seven minutes when Kane converted a penalty won by pantomime villain Dele Alli.

England star Alli was booed by Burnley fans from the fourth minute when he was booked for a lunging challenge on Charlie Taylor. 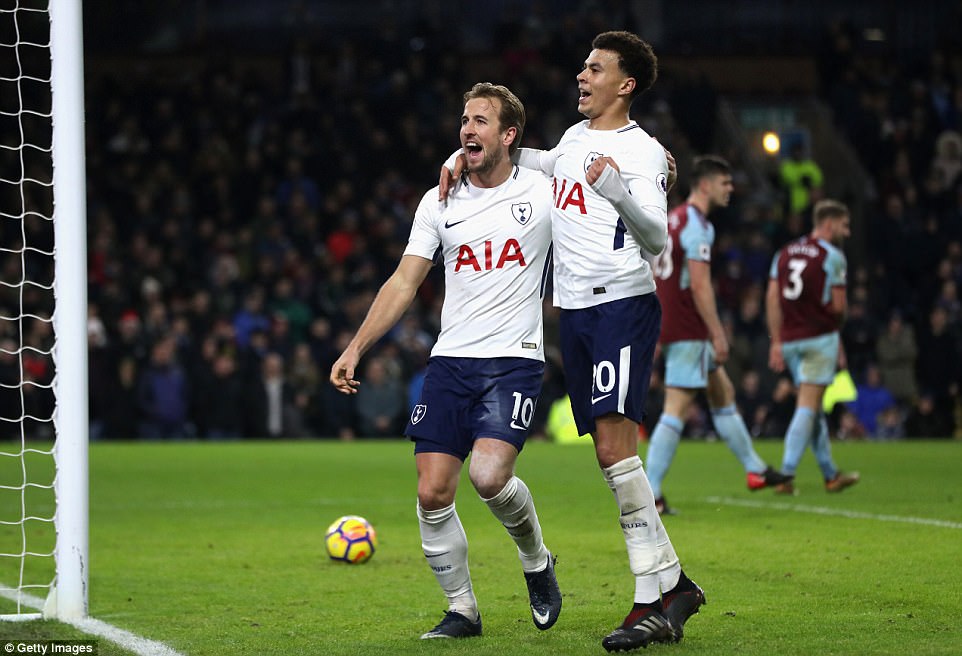 Two of Kane’s goals were assisted by England team-mate Dele Alli, who was unpopular among the home fans at Turf Moor 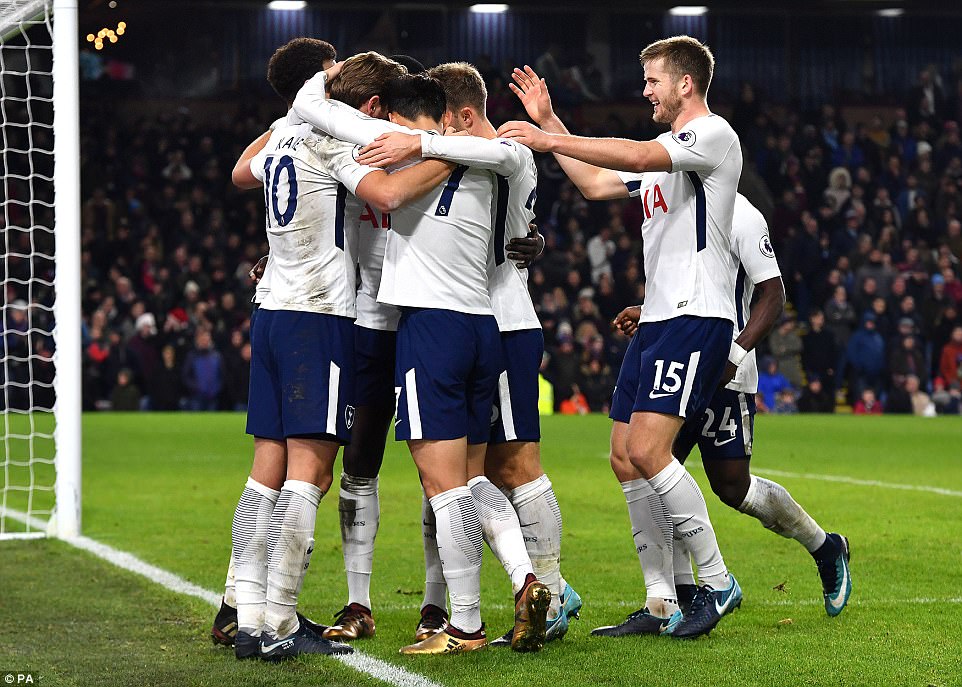 Sean Dyche played down the autumn’s high rolling which had sent Burnley into the match a point and place above their opponents and set in motion a Christmas programme which, with Manchester United and Liverpool to play in the next eight days, will tell us more about his side.

‘It’s something we take pride in,’ he said in his programme notes. Perhaps he had a premonition about the latest bitter sense of injustice he was about to feel.

Burnley have become well enough acquainted with the vagaries of refereeing decisions these past four months to know that the faintest contact can have brutal consequences. It’s a month since Aaron Ramsey dropped to the penalty area like a stone under a touch in the back to earn a match-winning penalty for Arsenal. ‘You lay your hands on someone, he goes down,’ Dyche complained later that night, implying that referees are biased in favour of the big clubs.

Yet it was hard to feel anything but sympathy at another bout of theatrics as the devil in Alli found Tottenham the penalty which established a lead – so precious against a side who had conceded only 12 goals all season. Long – deputising for James Tarkowski, the suspended buttress of Dyche’s defence – encroached into Alli’s personal space and down he went.

To have booked him for simulation would have meant dismissal, given that the player took only five minutes to enter the referee’s book for a mindless leap into a tackle on Taylor, both feet off the turf as embarked on it. So Michael Oliver took the standard option. The easy one.

The despatched penalty made it 34 Premier League goals in 2017 for Kane, a tally which only Alan Shearer (36 in 1995) and Robin van Persie (35 in 2011) have bettered in a calendar year. And in flashes we saw more of the kind of football which the Englishman has spearheaded in the past 12 months.

Alli was generally at the hub of it, executing an angular reverse pass on 13 minutes which allowed Kane – offside when he first received it though not deemed so – to shoot sharply a few inches wide of Nick Pope’s left hand post. A rapid three-man counter-attacking move saw Alli ferry Christian Erikssen’s ball on to Moussa Sissoko who, streaking in towards goal, drew a sharp double save from Pope, using his feet on both occasions.

It looked immediately like an uphill task for a home side whose 16-goal Premier League tally – joint fourth lowest in the division – tells its own story, though one of their brief incursions brought yet another setback. Chris Wood hustled Sissoko put of possession, fed Steven Defour and raced into the six-yard box to take the return pass. He collided with Hugo Lloris as the ball skidded and departed minutes later, to be replaced by Ashley Barnes. 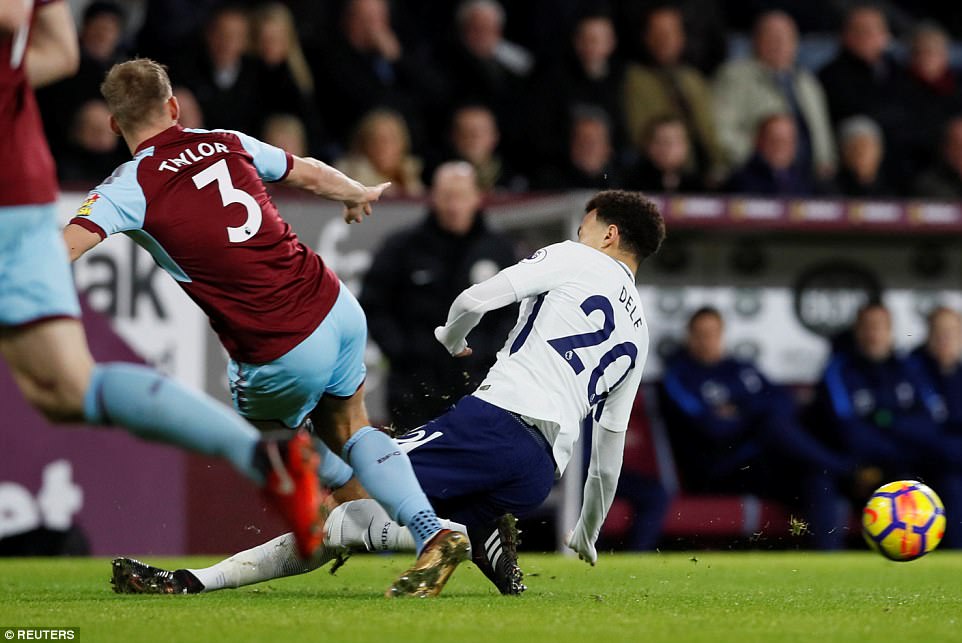 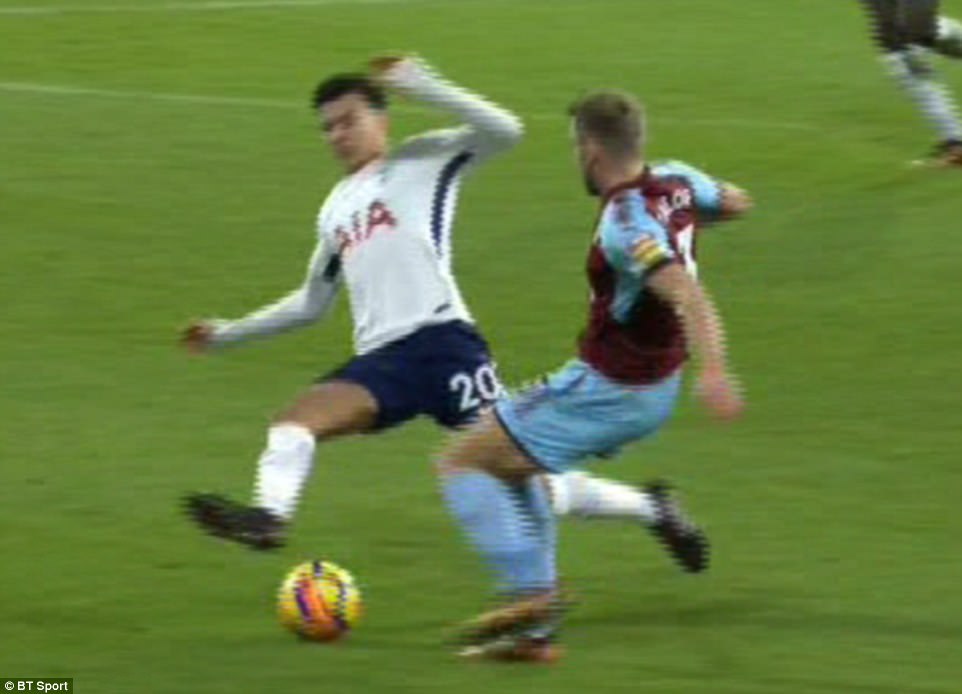 Alli, who was lucky not to be sent off at Manchester City last week, took a risk by diving in with both of his feet off the ground 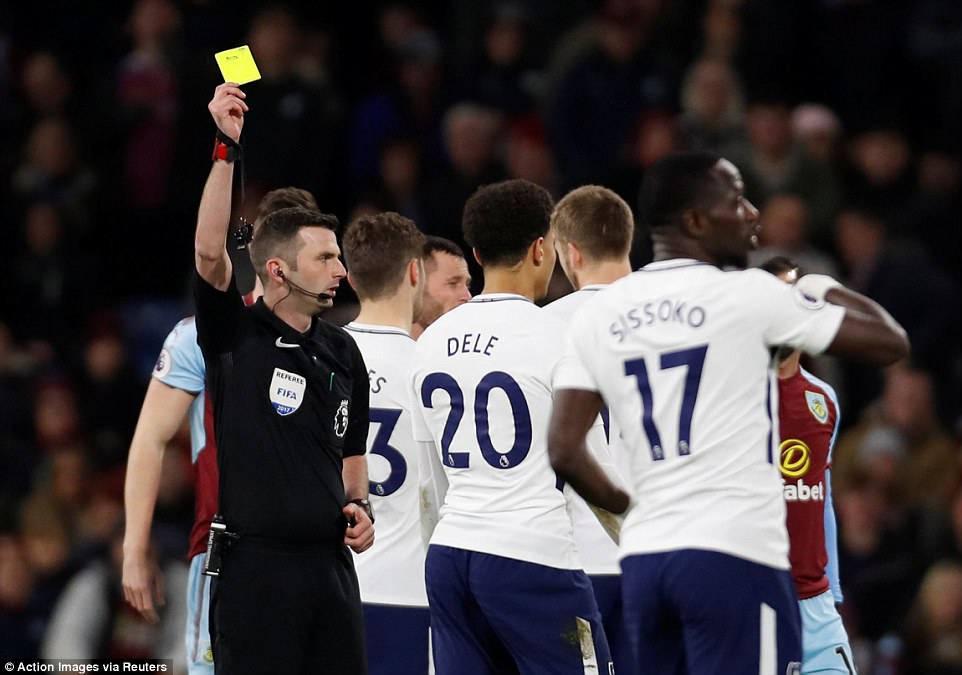 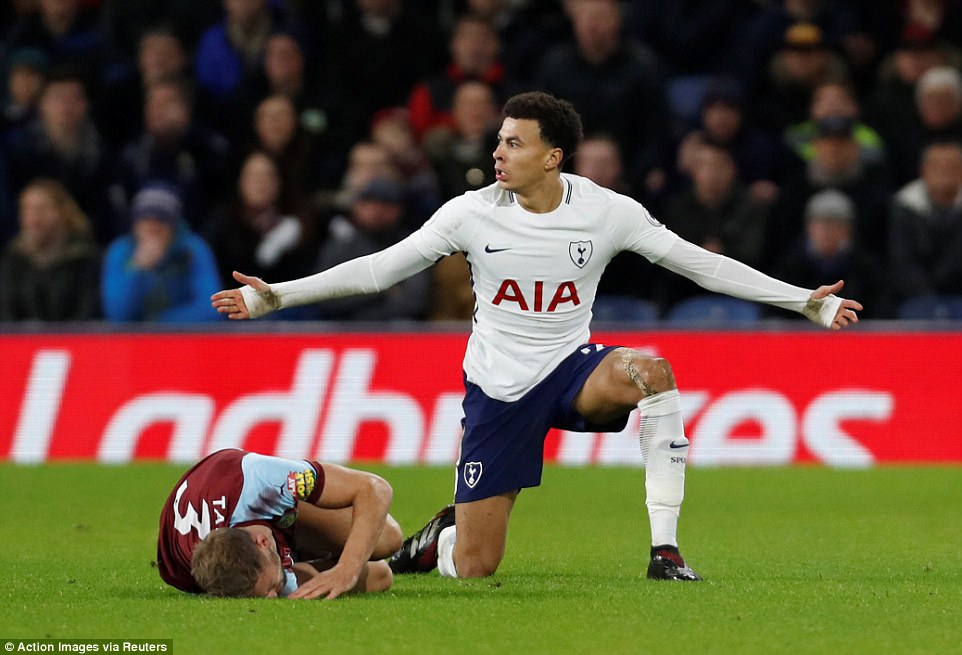 Alli, who was booed by the home supporters for the rest of the match, protested his innocence while Taylor lay on the floor 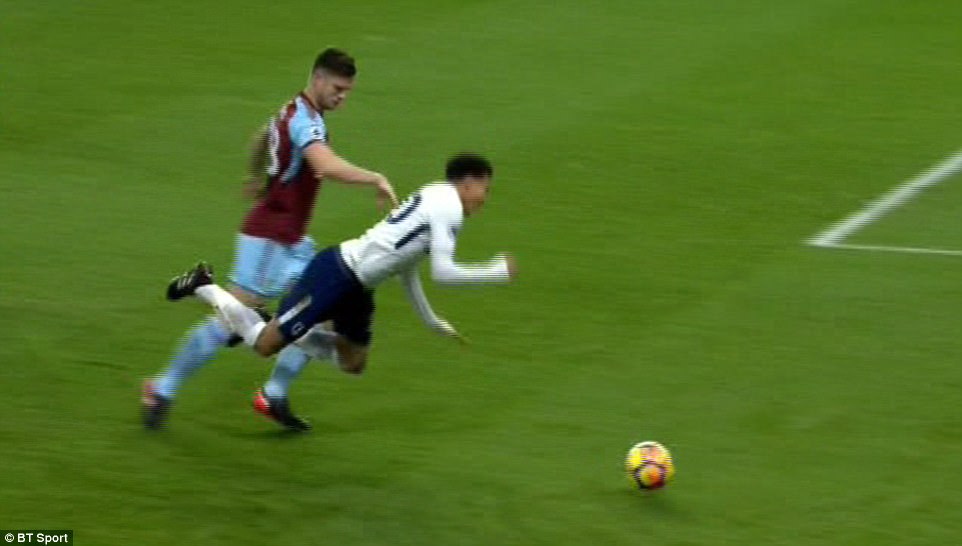 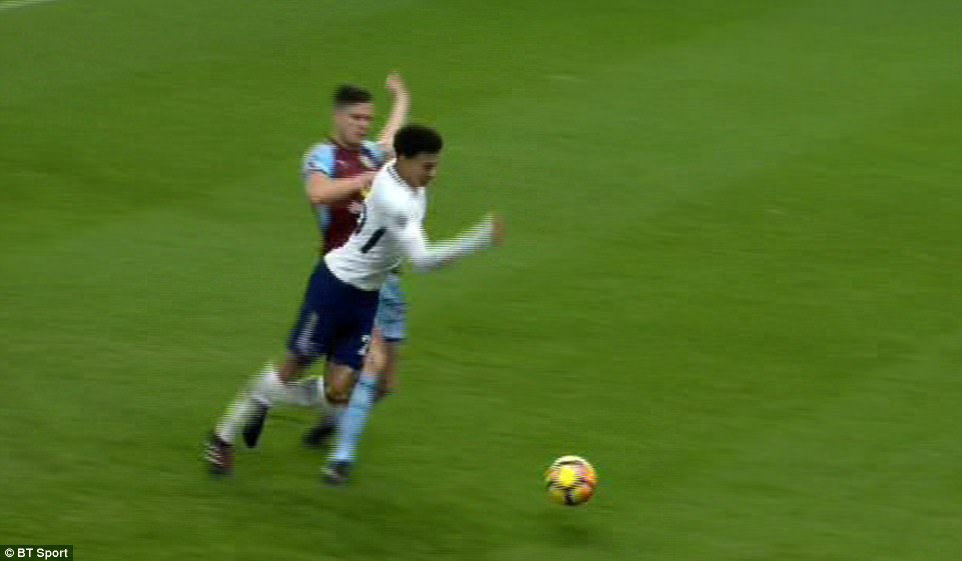 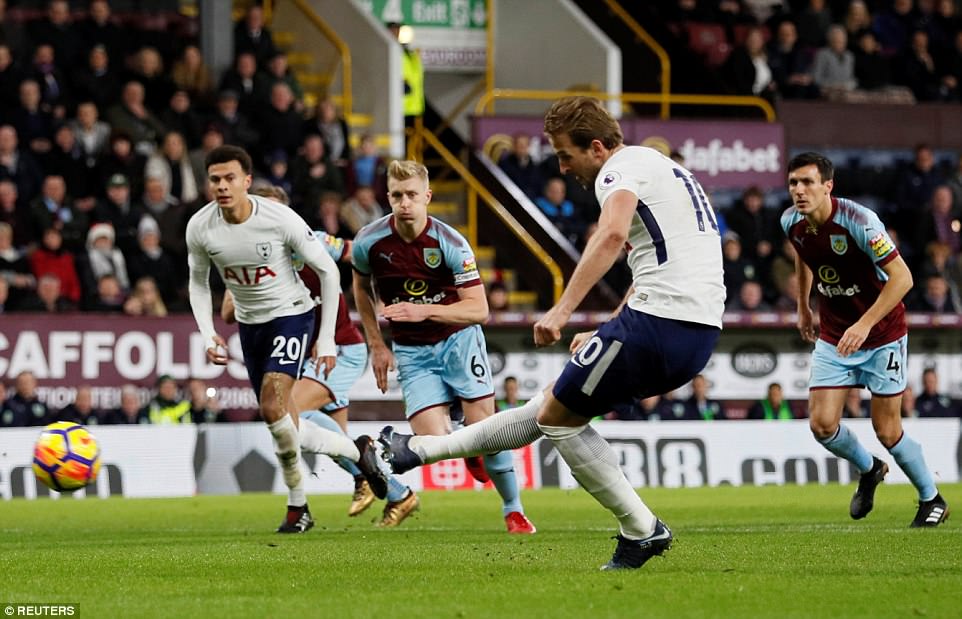 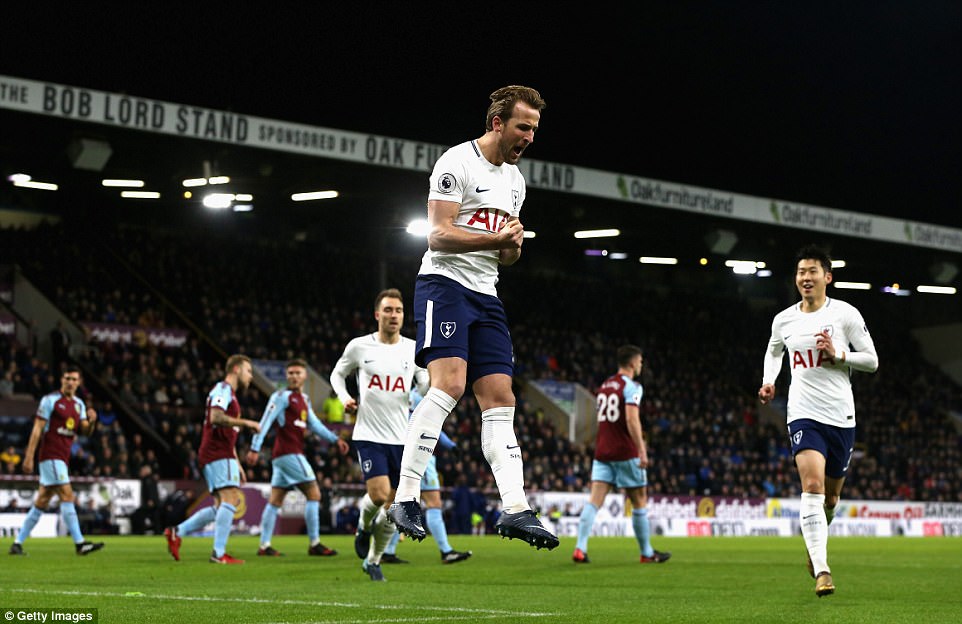 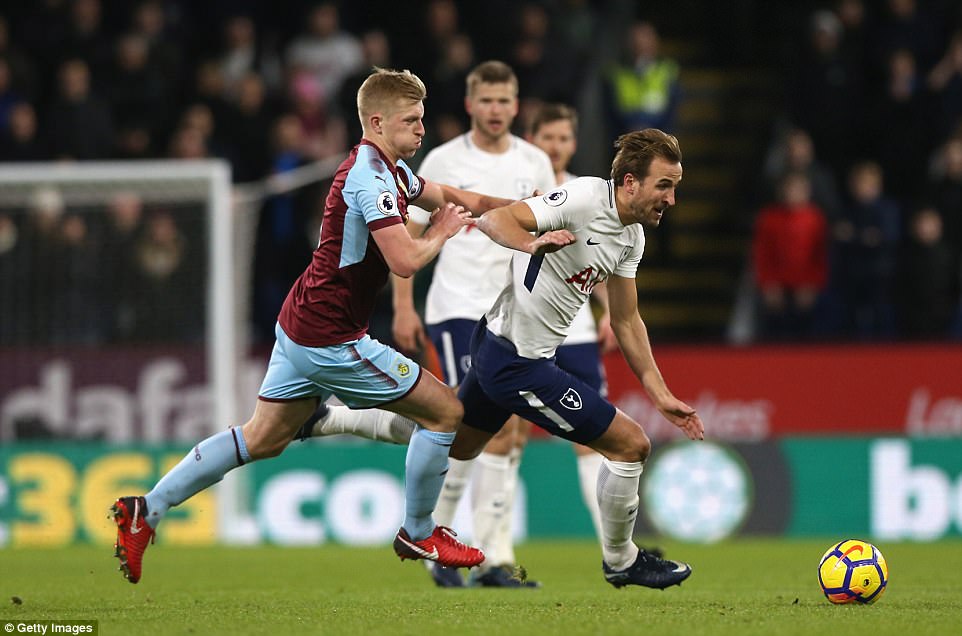 Kane looked sharp as Tottenham dominated the first half in which they posted 10 shots, while Burnley failed to register one 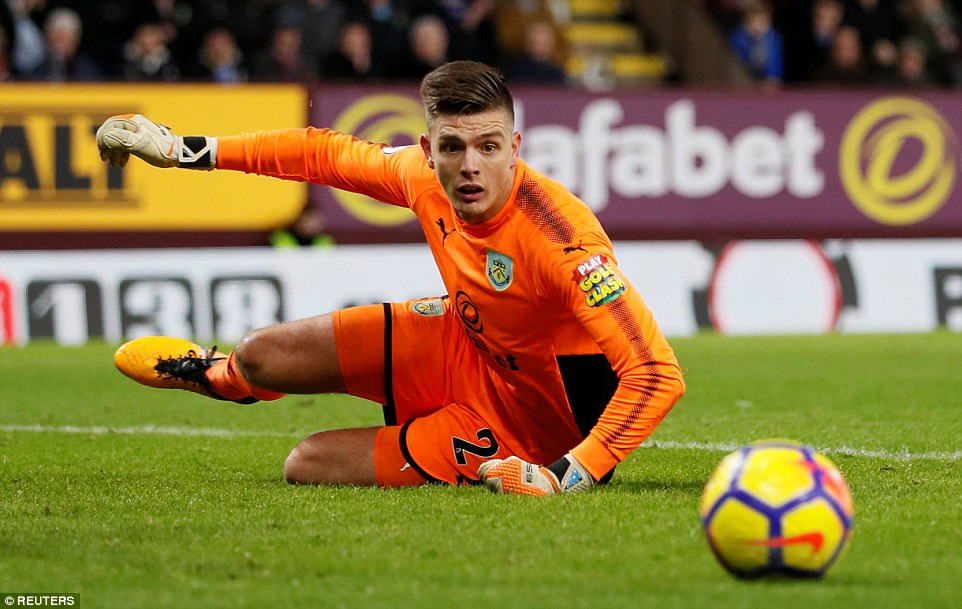 Burnley goalkeeper Nick Pope kept his side in the game with a string of first-half saves, including two to deny Moussa Sissoko 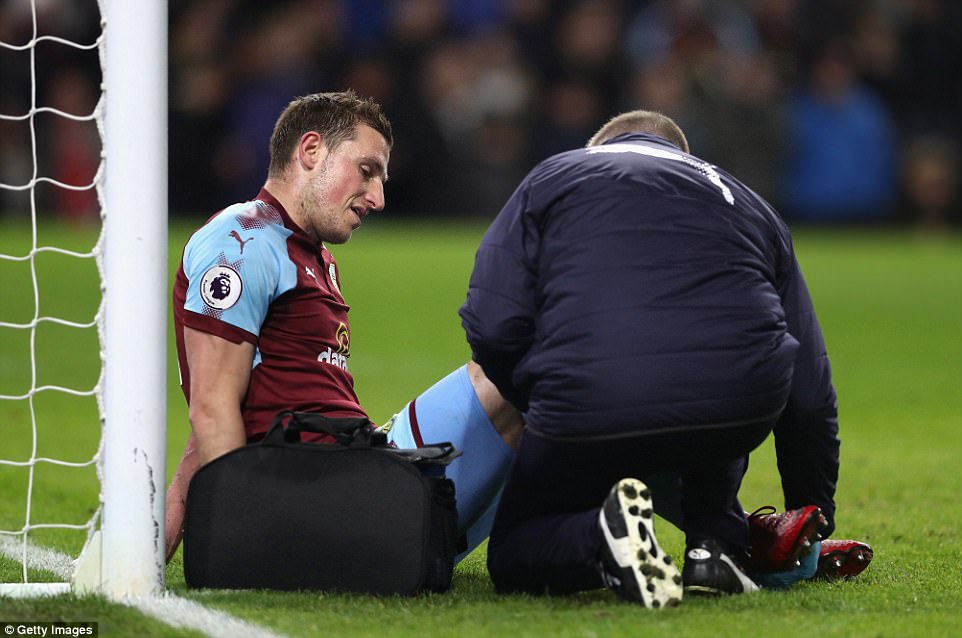 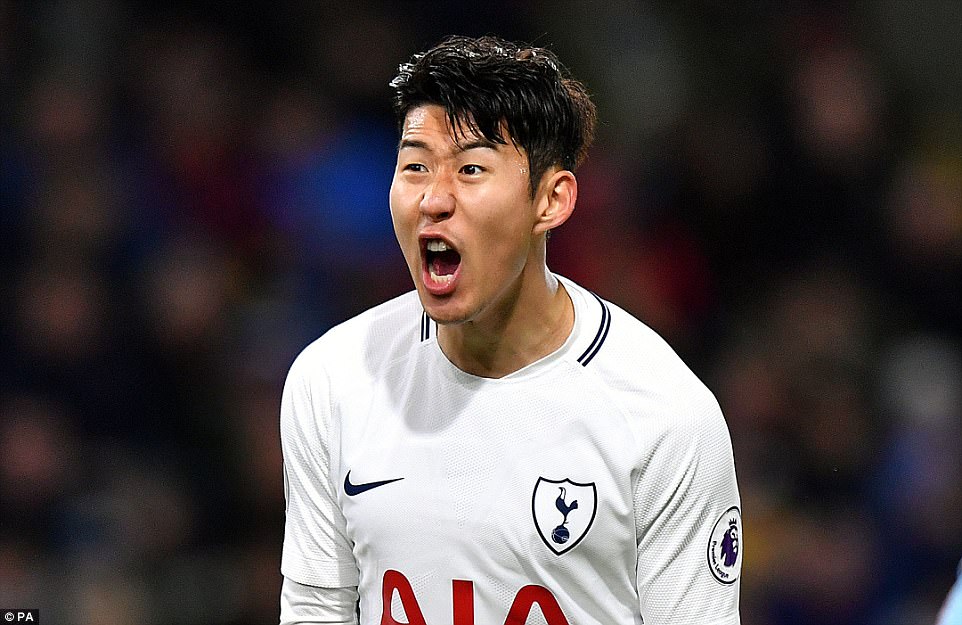 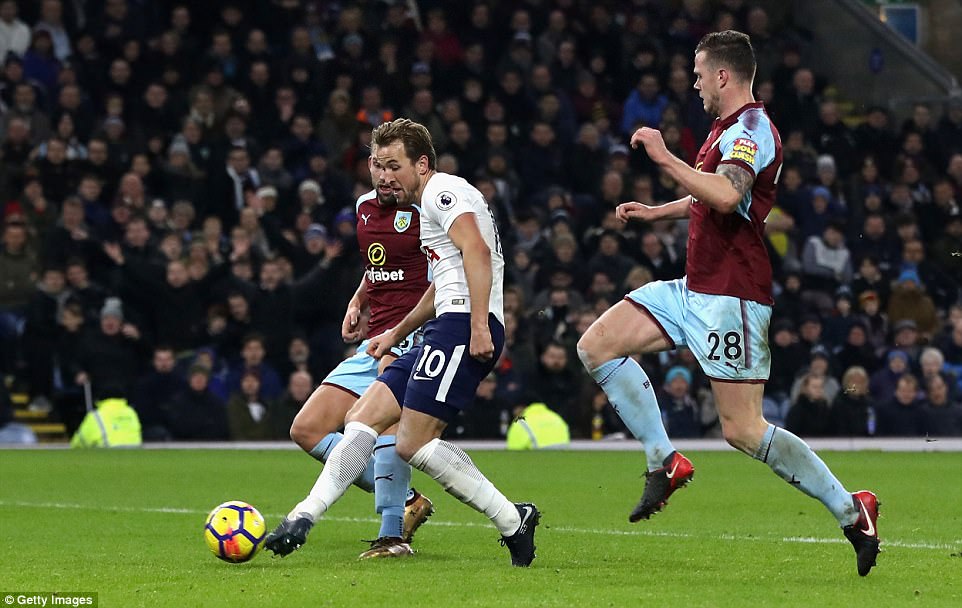 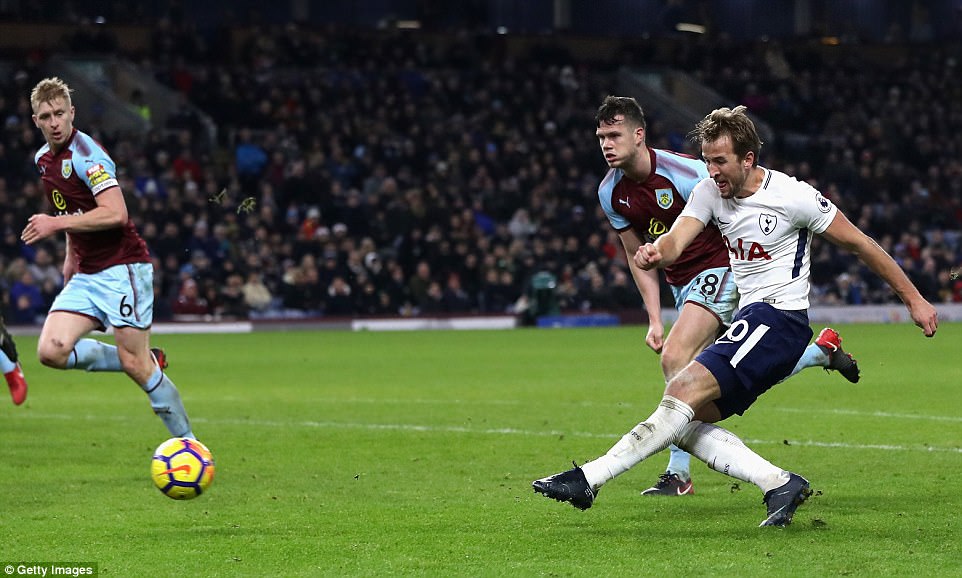