Midlands town Burslem has NO free ATMs after every bank branch closed – forcing 24,000 locals to pay up to £3.50 every time they want cash

Burslem’s 24,000 residents have been forced to pay up to £3.50 to withdraw their own cash after all the free-to-use bank machines in the town closed.

Locals have seen a number of bank and building society closures in the past three years, including branches of Nationwide, NatWest and Lloyds.

The only remaining cash machine in the Midlands town charges for withdrawals and others at nearby retail parks cost between 95p and £3.50 per transaction.

Locals have seen a number of bank and building society closures in the past three years, including branches of Nationwide, NatWest and Lloyds Bank (pictured)

Residents of Burslem now say they are being ‘robbed’ – and the lack of free cash machines has been raised at a parliamentary debate.

Phil Hardy, 53, who owns Otters Tears Beer Company claims he has been forced to use a bank in 20 miles away in Macclesfield since all of the town’s banks have closed.

He said: ‘The lack of physical cash has affected my business in more ways than one.

‘When my card reader broke, and the card machines were out of order, I had a customer that had to wait a whole hour just to be able to pay for something because there was nowhere for them to get cash from. So if the card reader doesn’t work, then I don’t get the business.’ 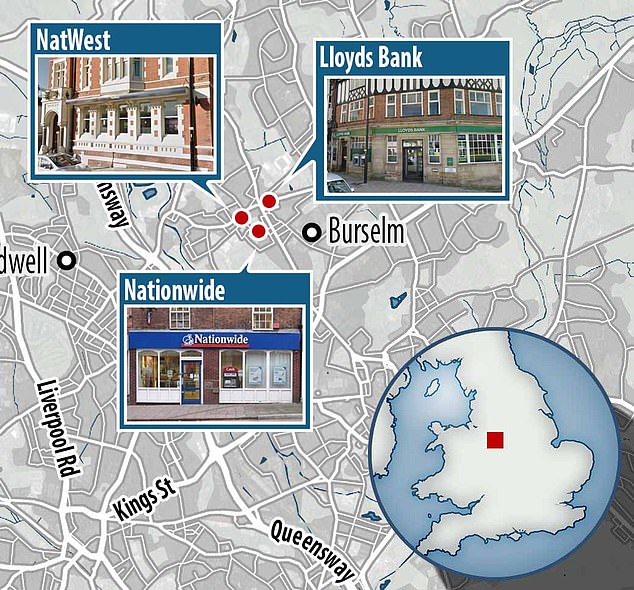 Pictured: NatWest, Lloyds Bank and Nationwide branches which have recently closed across Burslem

Janette Allen, 66, who lives in Burslem, said: ‘It’s just not fair. A lot of people like having money on them.’

He said: ‘A lot of people use cash, and now that all the cash machines have disappeared, we are in a desperate situation.’ 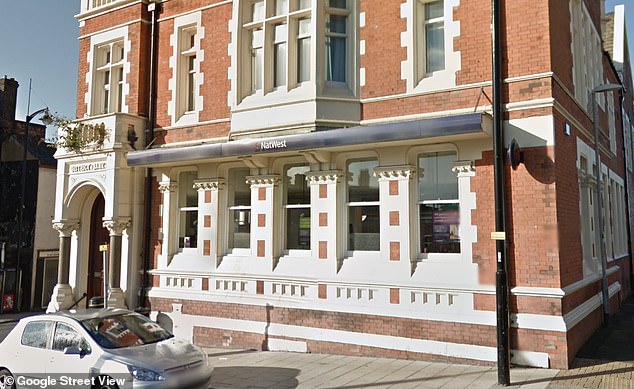 Residents of Burslem now say they are being ‘robbed’ – and the lack of free cash machines has been raised at a parliamentary debate (Pictured, NatWest in Burslem)

She said: ‘As of this month, Burslem residents no longer have access to a free-to-use cash point. That is completely unacceptable for a town of some 20,000 people.

‘Those on low incomes will be hit hardest by the need to pay for cash withdrawals, and data shows that new businesses struggle in areas where free access to cash is not available to the community.

‘I have asked the Treasury minister to meet with me as a matter of urgency to see what can be done to reverse this situation and ensure that our ATM companies are meeting their obligations to provide free access to cash.’

Recent figures show that free ATM machines have been closed at an unprecedented rate in the UK – around 250 a month – since the beginning of 2018.

And, while there has been a decline in cash use, almost three-quarters of adults in the UK say they still need cash at least two or three times a week. 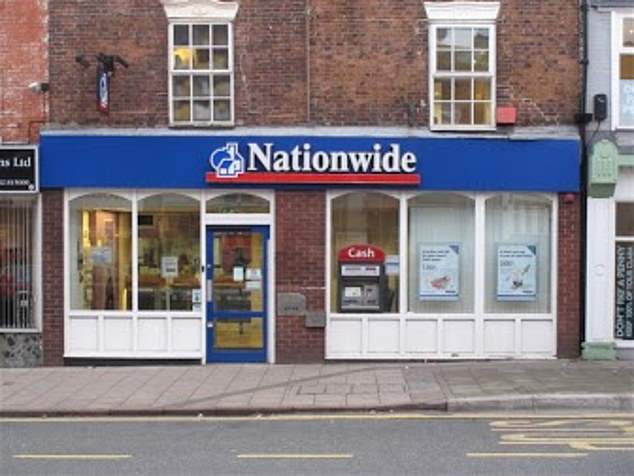 Recent figures show that free ATM machines have been closed at an unprecedented rate in the UK – around 250 a month – since the beginning of 2018 (Pictured, Nationwide in Burslem)

Burslem, which is a part of Stoke-on-Trent, was once famed around the world for its pottery and each year thousands of tourists still visit the area that was home to the potter Josiah Wedgwood.

The town’s other famous residents include Robbie Williams, who was a major shareholder in the local football team Port Vale, Ian ‘Lemmy’ Kilmister of Motörhead, and 16-time world darts champion Phil Taylor.

Robert Jenrick MP, Exchequer Secretary to the Treasury, said: ‘We are pressing continuously the payment regulator and the LINK organisation which manages the ATM network to ensure a good supply of cash in all parts of the country.

‘We recently did a call for evidence at the Treasury to give greater consideration to how we can maintain that supply as we move to an increasingly more cashless society and protect those who are vulnerable and harder to serve.’