A stricken family were today pulled to safety by firefighters after a burst water main flooded the streets and left them trapped in their home.

Footage posted on social media showed cars completely submerged in water on a residential street and people wading through huge puddles on their morning commute as many were left without electricity and water for more than 17 hours.

One boy was even filmed climbing out of his window to get to school as the water had barricaded his front door, while a family of four with a baby were rescued in a dinghy.

Thames Water said the pipe burst last night, but it didn’t know what had caused the damage. 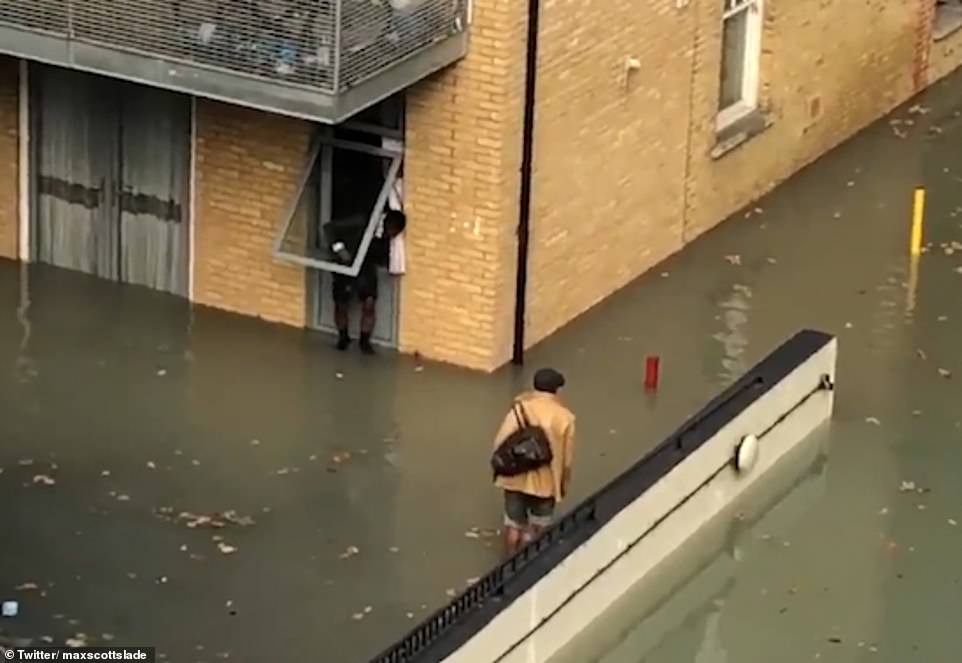 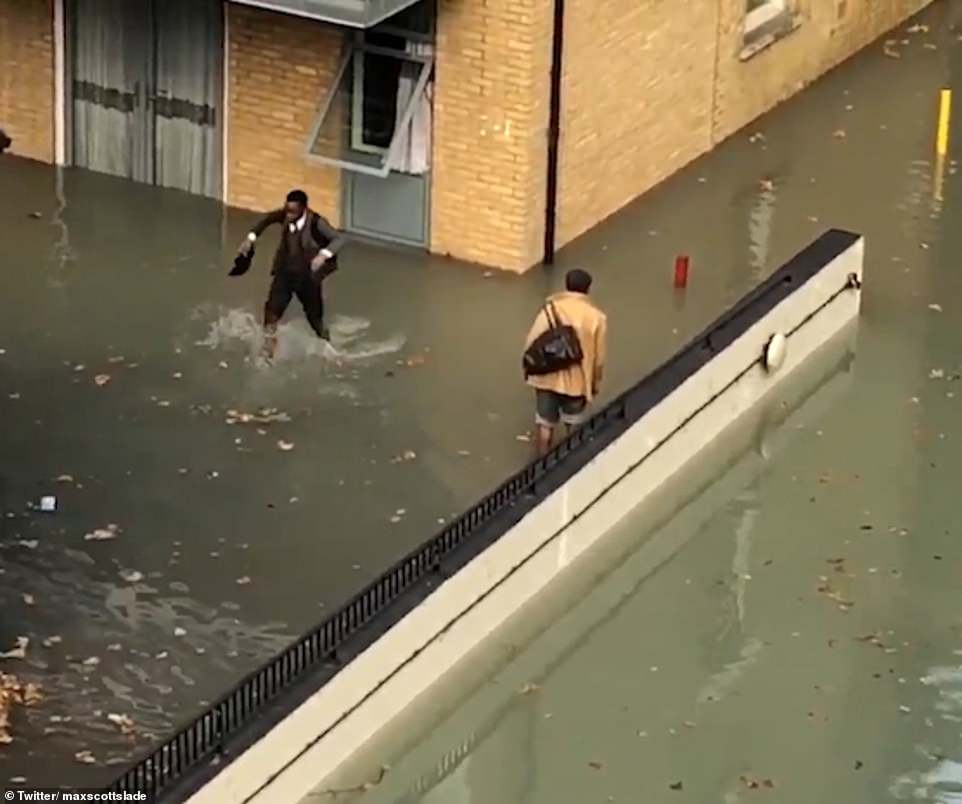 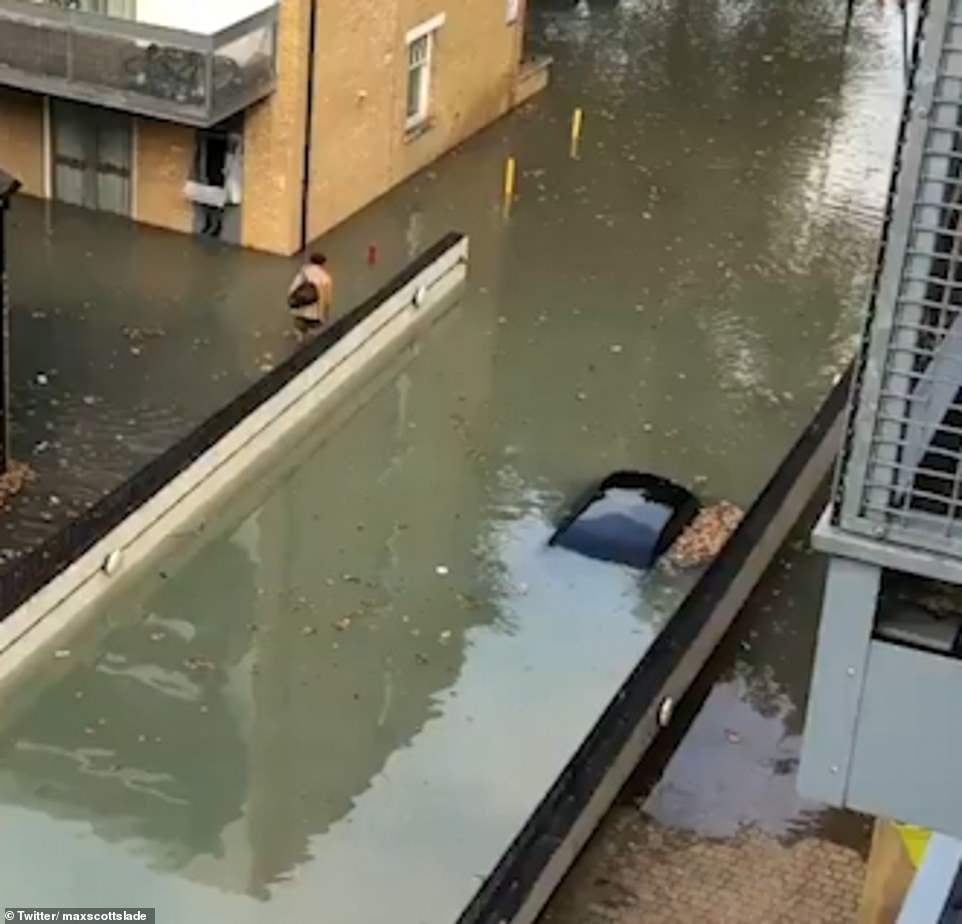 Residents were seen standing on walls to avoid getting soaked while separate footage showed water pouring from the damaged pipe into a nearby canal.

Kris Lee, whose home overlooks the flooding, told the Hackney Gazette: ‘The pipe burst where the big tree is that’s stuck in the middle of the hoarding.

‘It started at 10pm and it’s getting worse and worse. The London Fire Brigade are here now but they are trying to suck the water out through a 6in pipe. The burst pipe is 36in. I think they’re fighting a losing battle. 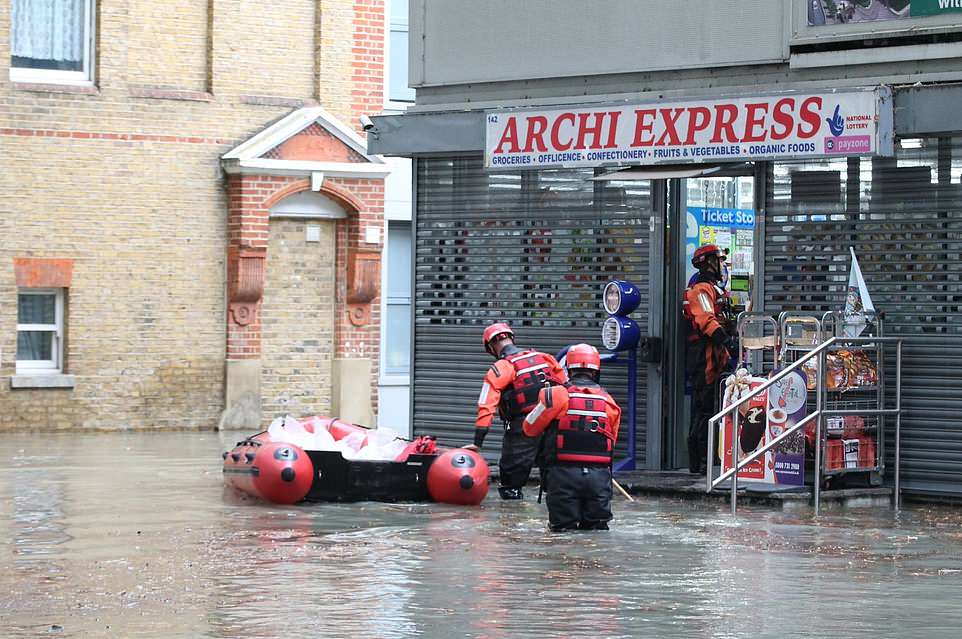 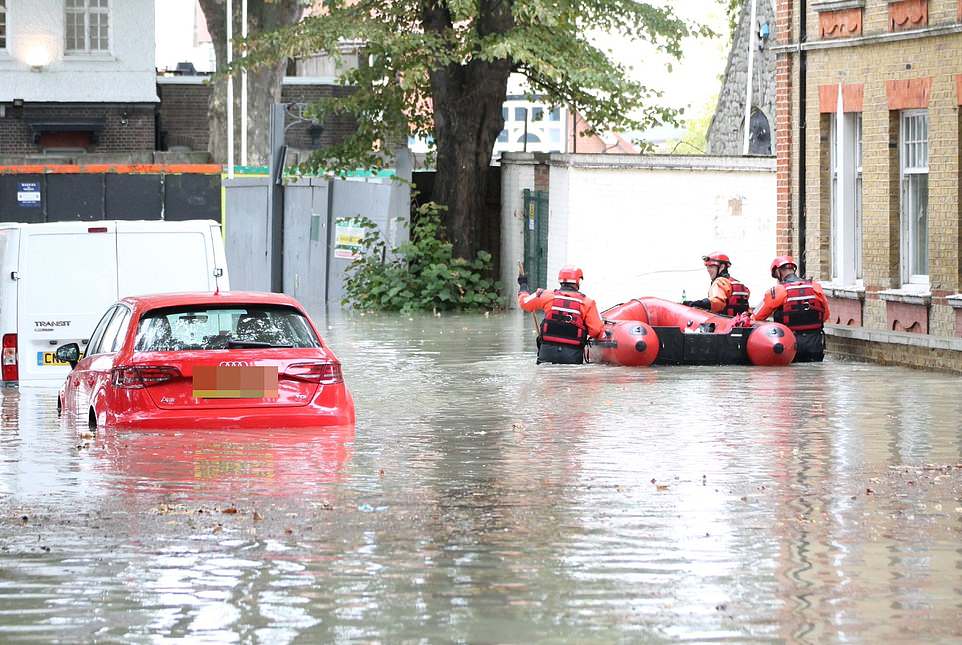 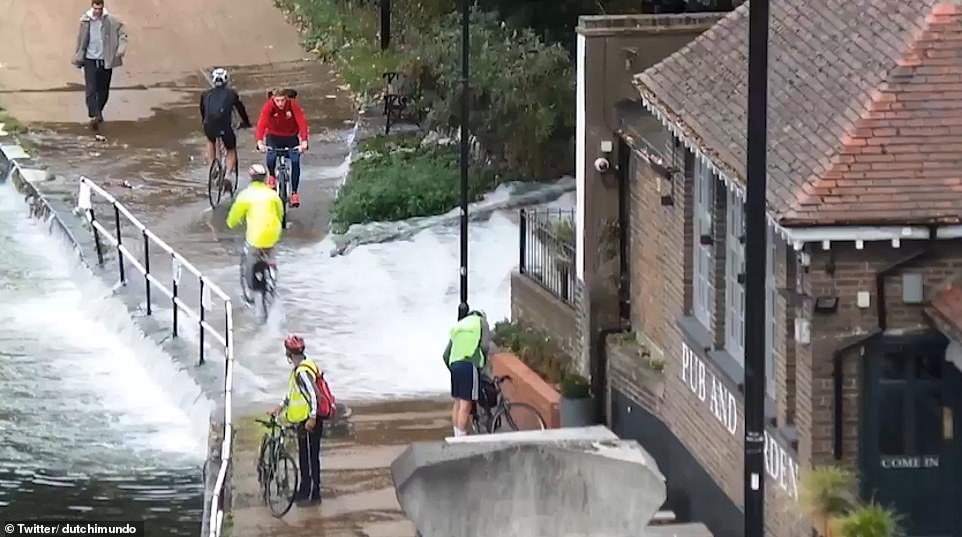 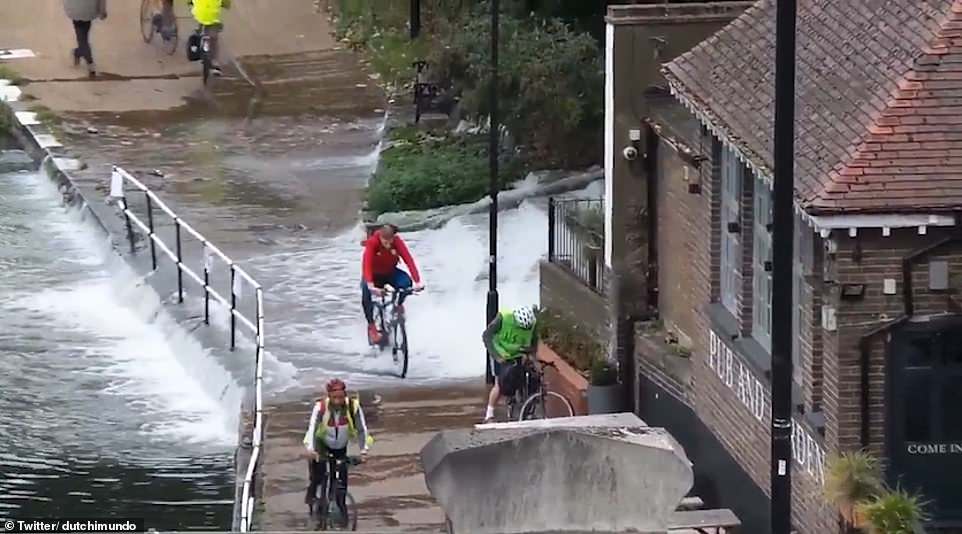 Emergency services are still trying to stop the leakage, which has now been ongoing for 14 hours

‘There are cars that are completely underwater in the car park. The residents of Paradise Park have no electricity or water, I don’t think it’s reached the flats yet but it will if it doesn’t stop.’

A Thames Water spokesperson said: ‘We’re really sorry for the disruption caused by our burst pipe affecting the area around Lea Bridge Road.

‘Our specialist team of customer reps, ambassadors and loss adjustors are in the area to support our customers at what we know will be a difficult time for those affected by the flooding. 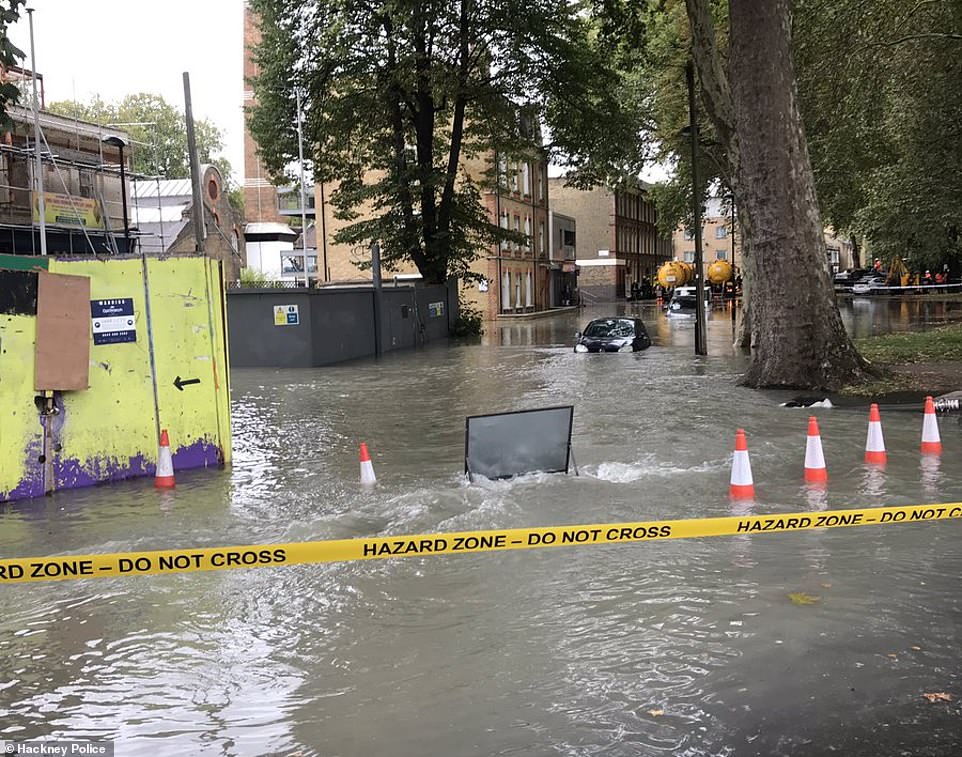 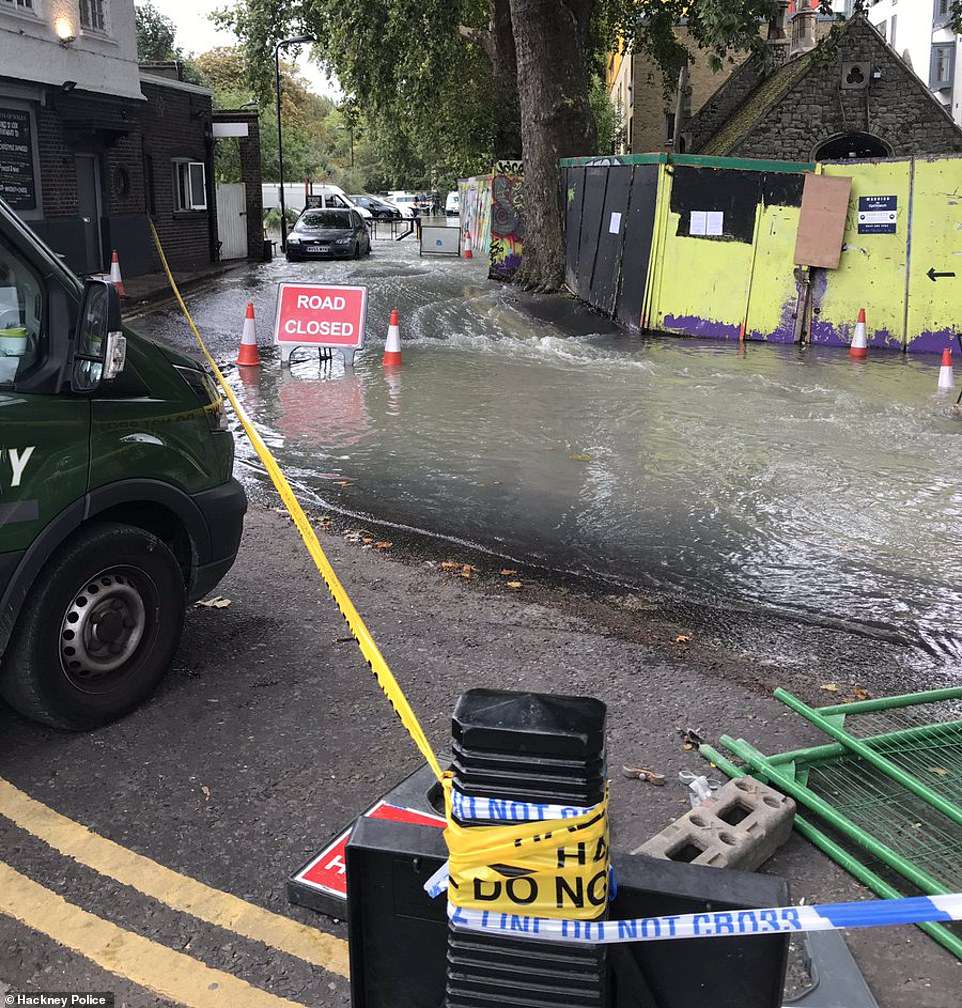 ‘Our top priority will be minimising disruption for them and getting things back to normal as soon as we possibly can.

‘Our engineers have been working hard since the early hours to stop the water flowing from the pipe and in the meantime we’re extremely grateful for efforts of the fire service to help pump water away from properties.’

A fire brigade spokesperson said: ‘Firefighters are dealing with a flooding in an underground car park on Lea Bridge Road in Hackney, E5. 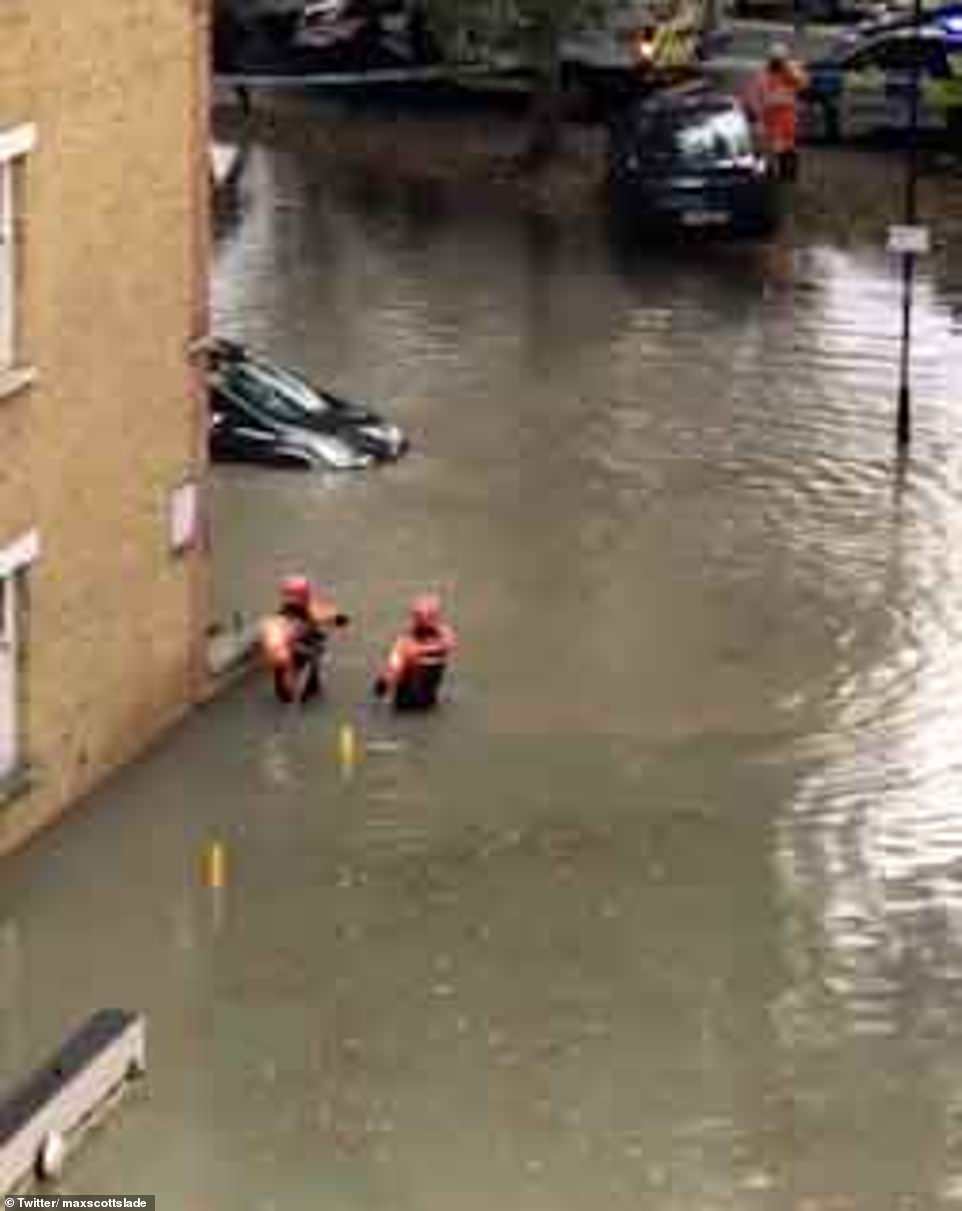 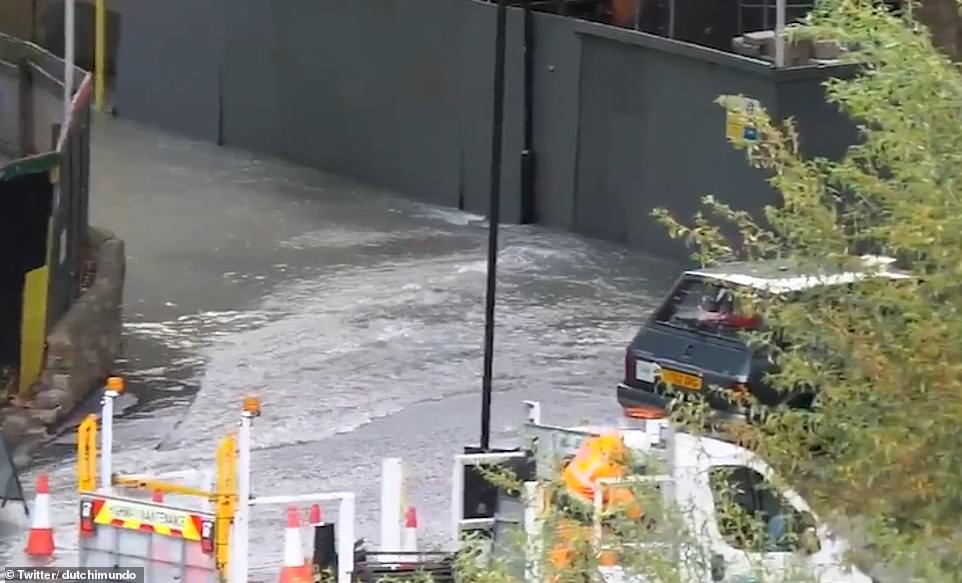 ‘The flood has been caused by a burst water main. Thames Water and the police are on the scene.

‘Firefighters are pumping water out of the car park.

‘Four fire engines from Homerton and Stoke Newington fire stations are at the scene. Two fire rescue units from Bethnal Green and Euston are also at the scene. Around 40 firefighters are in attendance.’