Bus lane bandits! ‘Ruthless’ town halls rake in record £39MILLION in fines from drivers who stray on to the wrong side of the road

By James Salmon Transport Editor For The Daily Mail

In total, drivers paid out £39million in penalties across England during 2017/18 after being caught on camera straying into bus lanes.

But councils spent just over £13million on enforcement, including installing and operating the cameras.

Drivers in London now pay up to £160 if they stray into a bus lane, dropping to £80 if they pay up within two weeks. Elsewhere penalties can range between around £60 and £90 [File photo]

This means their profits have jumped to £26million – a rise of 35 per cent from £19million the previous year.

The AA’s president Edmund King said the ‘ruthless’ approach shown by some councils ‘beggars belief’, and accused them of using bus lane cameras to ‘fleece drivers’ rather than as a deterrent.

The group has complained its own patrol vehicles have been fined for straying into bus lanes to rescue stranded vehicles, or even to let emergency vehicles past.

Drivers in London now pay up to £160 if they stray into a bus lane, dropping to £80 if they pay up within two weeks.

Elsewhere penalties can range between around £60 and £90.

The figures – released by the Ministry of Housing, Communities and Local Government – do not include money generated by Transport for London, which operates the bus lane cameras on the capital’s major roads.

But London boroughs made an impressive margin – generating almost £6million, while spending just under £1.5million running their enforcement systems.

Outside the capital, Manchester generated the biggest haul, with its bus lane profits almost doubling over the year to £7.1million.

Coventry’s profits increased six-fold to £1.7million, while Bath and North East Somerset and Reading both had bumper years, generating surpluses of £677,000 and £589,000 respectively.

As with parking fines and charges, councils have to reinvest the extra cash they make from bus lane fines – so they say they make a ‘surplus’, not a profit.

But Mr King said: ‘It beggars belief how much councils are making from bus lane cameras. What should be a matter of deterrence to keep the buses moving has for many become a ruthless exploitation of enforcement powers.

‘But it doesn’t have to be this way. The official figures also show that some councils make minimal amounts of money and even small losses because enforcement is there to do a job, not fleece millions of pounds from drivers.’ 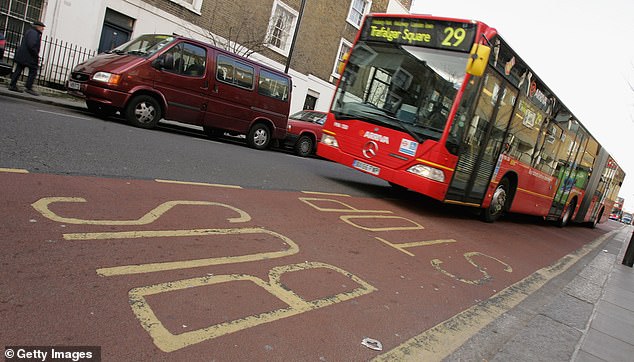 The controversial city centre camera caught out so many drivers it was dubbed the ‘most prolific in Britain’.

Between February and October 2016, 62,975 drivers were trapped, raking in a total of £1.5million. The camera was suspended northbound in June 2017.

Martin Tett, the Local Government Association’s transport spokesman said: ‘Fines from traffic offences are spent on local transport improvements and help to keep pedestrians, motorists and cyclists safe and ensure people can park near their homes and local shops.’

He said any motorist who feels they have been unfairly fined has the right to appeal.