Fire crews are bracing for the return of severe fire conditions with hot and windy weather forecast across Australia’s east.

Although fire grounds across NSW have received rainfall in the past week, the RFS has warned forecast high temperatures and winds could see fire activity increase on Thursday.

Temperatures are expected to reach 40C in Nowra on the South Coast, 43C in Penrith in western Sydney, 41C in Cessnock in the Hunter region and 42C in Bulahdelah on the mid-north coast.

Heatwave ahead: Temperatures are expected to reach 40C in Nowra on the South Coast, 43C in Penrith in western Sydney, 41C in Cessnock in the Hunter region and 42C in Bulahdelah on the mid-north coast

‘There is a broad area of severe and very high fire danger and areas of extreme fire danger,’ Mr Shepherd said on Wednesday.

‘All fire grounds have received some rainfall and that has greatly reduced some fire activity but we might still see some fire grounds pick up and move tomorrow.’

Total fire bans were in place on Wednesday in the state’s southwest, far west and northwest where the fire danger rating was listed as severe.

The Bureau of Meteorology on Wednesday issued a severe weather warning for damaging winds in parts of the Riverina, Snowy Mountains and far western NSW.

Winds averaging up to 65km/h with gusts of 90km/h are expected on Wednesday afternoon and into the evening. 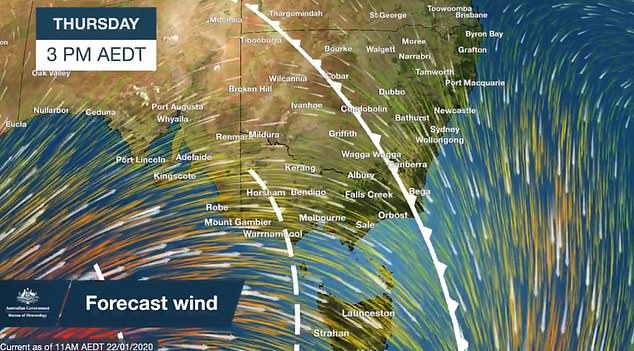 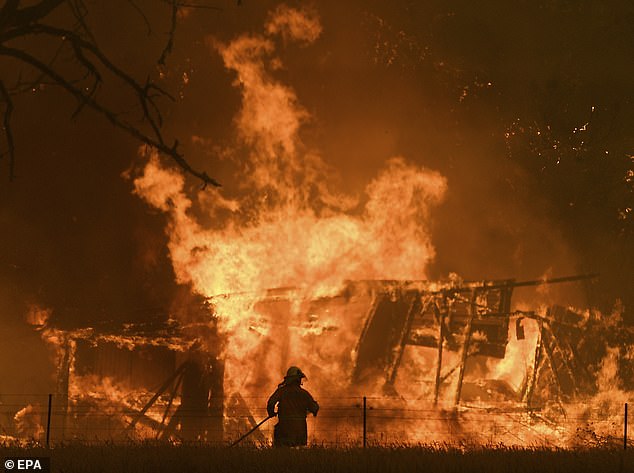 More than 60 fires continued to burn across the state as of Tuesday night with 16 yet to be contained. Officials fear dry and hot conditions may flare up current fires. (Pictured: Service crews fight the Gospers Mountain Fire last month)

The warning comes after severe thunderstorms hit Sydney, Newcastle and Wollongong on Monday, leaving homes and businesses without power.

More than 60 fires continued to burn across the state as of Tuesday night with 16 yet to be contained. More than 1100 firefighters were in the field.

Parts of Victoria are also bracing for severe fire danger after two stormy days brought rain to fire-affected areas as well as a trail of further destruction.

A heatwave on Wednesday morning was forecast to bring temperatures into the high 30s and strong winds with speeds of up to 50km/h in parts of the state.

The Country Fire Authority is concerned the weather conditions will not only threaten to flare up current fires in the east but also to start new blazes in western and central Victoria. 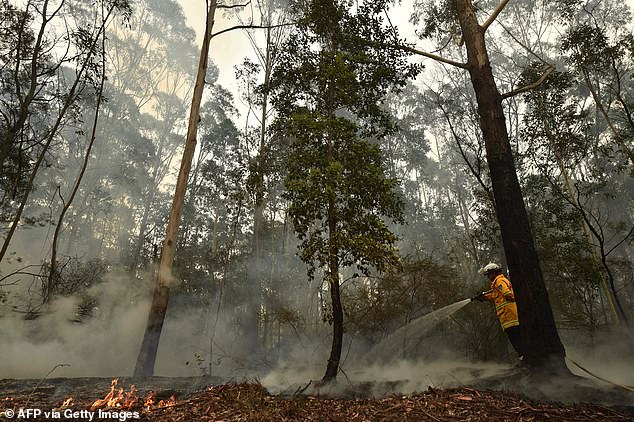 Temperatures are expected to reach 40C in areas of the South Coast. Pictured: A firefighter tackles a bushfire south of Nowra on January 5

A total fire ban was in place across all western and central areas of Victoria, as fast-running grassfires might mean firefighters will struggle to extinguish new blazes sparking on Wednesday.

‘We’ve gone from fires and storms and floods and giant hail the size of limes to fire danger escalating on our doorstep.’

This new spin of weather conditions comes after heavy rainfall resulted in thousands of people calling emergency services for help.

The State Emergency Service has received 2220 calls for assistance since rain lashed the state on Sunday afternoon, followed by another bout of storms on Monday. 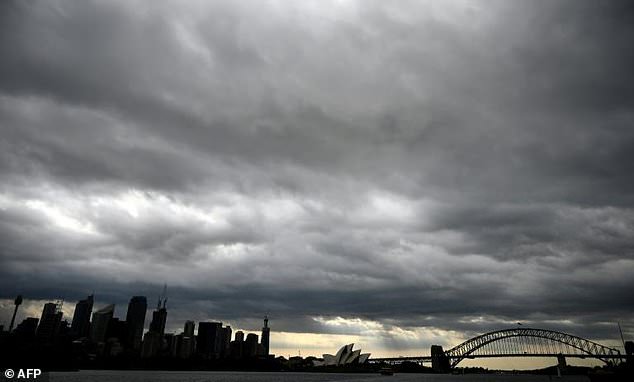 1500 NSW volunteer firefighters rejoiced in the rain which helped put out 49 fires since last Saturday. These two volunteers are pictured at the One Mile fire near Port Stephens, NSW

The majority of calls have been for building damage, with about 300 for trees down and 250 for flooding.

The rain fell hardest on Monday at Gippsland’s Mount Moornapa, which received 139mm, marking its wettest day since 2007.

Melbourne recorded 44mm of rain on Tuesday, which marked its highest 24 hour rainfall since 2011.

Lighter showers in East Gippsland and the north east have helped firefighters fight the active blazes ravaging the region, but have also caused damage to roads and landslips.

But crews have managed to get roads open for residents despite the fire and rain.

Meanwhile in Queensland, forecasters have issued its first flood warning since May last year for a shire that’s been fully drought-declared for six long, hard years.

The past week of showers and storms has pushed the Paroo River at Caiwarro, in outback Bulloo shire, to minor flood levels.

More rain is expected over the catchment in coming days, the river at Hungerford is likely to exceed that on Wednesday or Thursday.

That would be a small miracle for southwestern communities that have been drought declared since January 2014.