Bushfire emergency with residents warned it’s TOO LATE to leave home: ‘You are in danger and need to act immediately to survive’

Residents have been told it’s too late to evacuate their homes as a bushfire emergency threatens Western Australia’s south coast.

The Department of Fire and Emergency Services (DFES) issued an emergency warning for parts of Eagle Bay, Naturaliste, Dunsborough and Busselton on Tuesday.

The fire is threatening the Eagle Bay townsite, Meelup Regional Park and in an area bounded by Cape Naturaliste and Dunsborough, with residents advised it’s too late to evacuate.

Residents in parts of Eagle Bay, Naturaliste, Dunsborough and Busselton have been told its too late to leave as a bushfire burns out of control on Tuesday (pictured)

Residents are urged to shelter in their homes in a room away from the fire front and ensure they are able to easily escape.

All doors and windows of the house must be closed with air conditioners switched off but water running through the system if possible.

If a home does catch fire and conditions become too unbearable inside, people are advised to go to an area that has already been burnt.

The warning was issued just before 5am Tuesday after a fire began near the intersection of Curtis Bay Beach in Dunsborough. 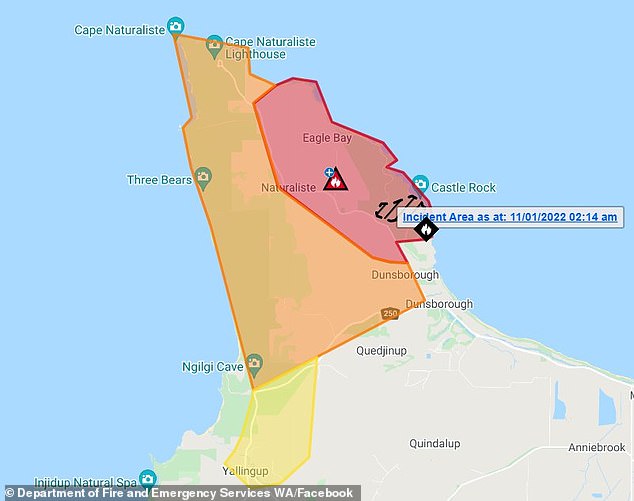 Residents in the Eagle Bay townsite, Meelup Regional Park and in an area bounded by Cape Naturaliste and Dunsborough have been told its too dangerous to evacuate

The blaze forced parts of Cape Naturaliste Road to close, with the DFES warning it will head in a south westerly direction and is out of control and unpredictable.

A bushfire watch and act is also in place for people north of Caves Road and west of Cape Naturaliste Road in parts of Naturaliste and Dunsborough.

The DFES warned the blaze posed a possible threat to lives and homes in the area as conditions are changing.

Residents who are unable to safely leave have been advised to proceed to the safer places of last resort.