Businessman, 21, has Porsche vandalised by graffiti ‘take off da rich and give to da poor’

Businessman, 21, has Porsche vandalised by graffiti with ‘take off da rich and give to da poor’ spray painted across the bonnet just a week after his £40,000 BMW was stolen

A young social media entrepreneur who had to cut short a holiday when his £40,000 BMW was stolen has now had his Porsche vandalised.

Abdul Ilyas’ car has been daubed with disgusting graffiti overnight while it was parked in Knightsbridge, London.

The vandals have spray-painted a racist comment, a vile swear word and the phrase ‘take off da rich and give to da poor’ across its bonnet.

The 21-year-old, of Derby city centre, said: ‘It really isn’t my week.

Graffiti paint sprayed on to the bodywork of the bright blue Porsche read: ‘Take off da rich give to da poor’ although it was not reported to the police The bright blue Porsche Supercar parked outside London’s famous Harrods store in Knightsbridge reads ‘robbed’. Some questioned whether the act was a publicity stunt

‘It happened overnight Friday into Saturday and I saw the graffiti when I woke up and went outside on Saturday morning.

‘I can’t believe this has happened to me, but I am looking at the positives.’

Last week Mr Ilyas, a businessman, contacted media asking for help in tracing whoever stole his convertible BMW from outside his mother’s home where he left it while he was on holiday in Dubai. Abdul Ilyas with his £40,000 BMW that has been stolen from Derby city centre

He thinks thieves took advantage of the fact that he was away and took his car in the early hours of Monday, August 19.

Mr Ilyas said they may have used a relay system to mimic the signal his key sends to his car to open it.

As a result, he had to cut his holiday short and change his return ticket, which cost him around £400.

Now he is pleading for anyone who might know something to get in touch with the police. 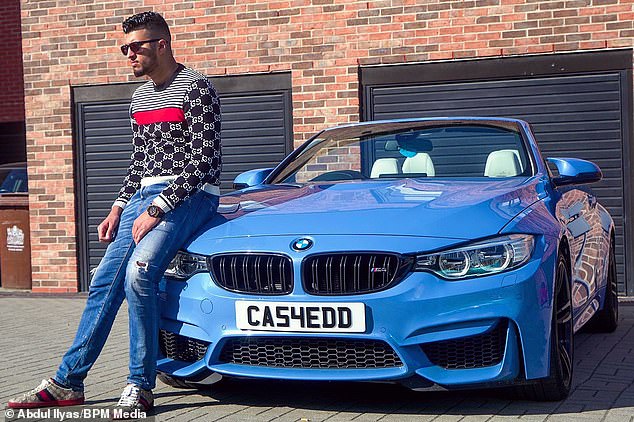 He thinks thieves took advantage of the fact that he was away and took his car in the early hours of Monday, August 19

Mr Ilyas previously said: ‘Whoever did it must have seen that I was going on holiday on social media and through that it was the right moment to steal it.’

He flew out on Thursday for a week, but on Monday morning he received a text message from his mum saying that his car was gone.

Mr Ilyas, who has a large following on Instagram, said: ‘Obviously I thought that it had been stolen. When I found out I had to change my ticket as soon as possible and fly back.’

He flew back on the Tuesday and began to investigate, putting out appeals on social media too. 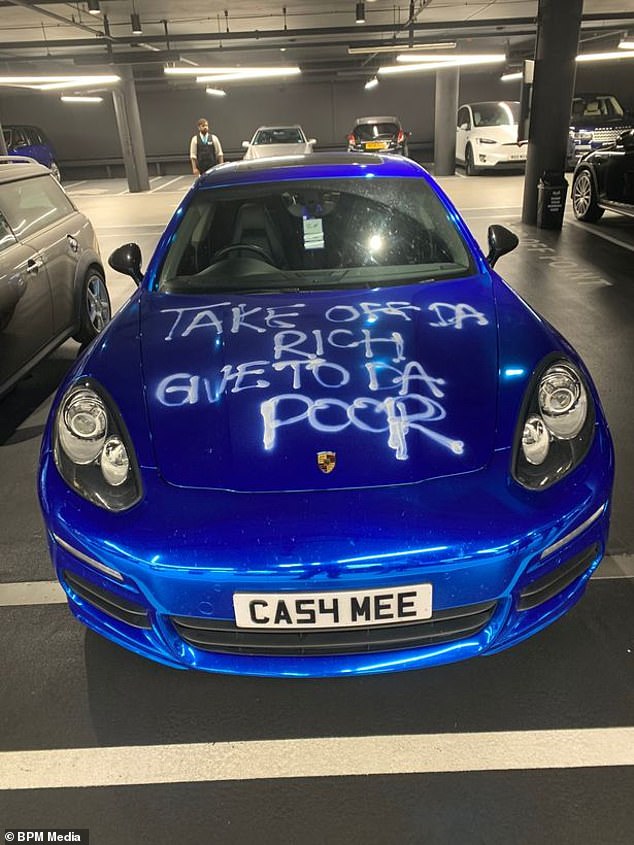 Mr Ilyas, who runs a social media agency called Blu Capital Education, said: ‘We had a look around to see if it was caught on camera but so far we’ve not been able to find anything.

‘It’s a convertible BMW M4. I bought it for the summer and I’ve only had it for three months.’

Mr Ilyas is devastated by the theft.

He said: ‘Things like this are rare in Derby. I want to raise some awareness on social media. So far we have had nothing concrete back about it.

‘People have seen a car that looks just like it without the number plate and things, but nothing firm as of yet.

‘If someone saw something it would be great if they came forward. There might be a reward as well.

‘There must be someone out there who knows something.’