Busted! Being ‘fat but fit’ really is a MYTH

Being ‘fat but fit’ really is a myth, new research found.

A study of more than 90,000 women found those who were obese were more prone to heart attacks and stroke.

This was even if they had always been metabolically healthy – free of high blood pressure, cholesterol, sugar or type 2 diabetes.

They were more than half as likely to develop cardiovascular disease as their normal weight counterparts.

Study leader professor Matthias Schulze, of the German Institute of Human Nutrition Potsdam-Rehbruecke, Nuthetal, said: ‘Our large cohort study confirms metabolically healthy obesity is not a harmless condition, and even women who remain free of metabolic diseases for decades face an increased risk of cardiovascular events.’

Fit, fat, but still at risk of heart attack

The ‘fat but fit’ theory suggests if people are obese the extra weight will not be harmful if other metabolic factors such as blood pressure and blood sugar are within recommended limits.

Last year, Dutch researchers claimed people were able to wipe out the dangers of obesity if they were active for at least four hours a day.

But the latest finding published in The Lancet Diabetes & Endocrinology adds to growing evidence that carrying too many pounds is harmful to health – irrespective of exercise levels.

Those who were obese and metabolically healthy for decades were still at higher risk of developing cardiovascular disease.

This was compared to women of normal weight who were also metabolically healthy.

The researchers said obesity can trigger cardiovascular disease, regardless of whether or not women develop any of the common metabolic diseases such as high blood pressure or type 2 diabetes.

They also found most women were also likely to become metabolically unhealthy over time – even if they were normal weight.

Professor Schulze said: ‘What’s more, we observed that most healthy women are likely to develop type 2 diabetes, high blood pressure, or high cholesterol over time, irrespective of their BMI, putting them at much higher risk for cardiovascular disease.’

Obesity is defined as having a BMI (body mass index) of over 30. It affects almost all of the cardiovascular disease risk factors.

In particular this includes those related to metabolic syndrome including high blood pressure, poor blood sugar control or diabetes, and abnormal blood fats, which double the risk of cardiovascular disease such as heart attacks and stroke.

But it is estimated up to one in three obese people are free of these disorders – and metabolically healthy.

How they conducted the study

To get to the bottom of the phenomenon professor Schulze and colleagues examined the link between obesity and cardiovascular disease in 90,257 women from the Nurses’ Health Study which has tracked 30 to 55 year olds in the US since 1976.

Between 1980 and 2010 the participants were sent questionnaires every two years to update their BMI and metabolic health as well as to assess their lifestyle, health behaviour and medical history.

This was after taking into account age, diet, smoking status, physical activity, alcohol consumption, ethnicity or race, education level, menopausal status, aspirin use and family history of heart attack or diabetes which may have influenced the results.

During an average follow-up of 24 years 6,306 new cases of cardiovascular disease, including 3,304 heart attacks and 3,080 strokes, were recorded.

Cardiovascular disease risk was especially high in all metabolically unhealthy women, regardless of their BMI.

Those with ‘metabolically healthy obesity’ were also at a 39 percent overall higher risk. 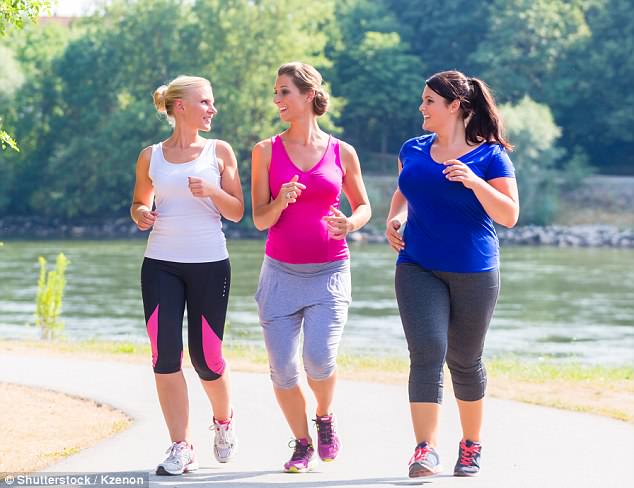 Professor Schulze said: ‘Long-term maintenance of metabolic health is a challenge for overweight/obese, but also for normal-weight women.

‘Our findings highlight the importance of preventing the development of metabolic diseases, and suggest that even individuals in good metabolic health may benefit from early behavioural management to improve their diet and increase physical activity in order to guard against progression to poor metabolic health.’

Professor Carl Lavie, of the University of Queensland School of Medicine, New Orleans, USA and colleagues who reviewed the study for the journal said it was still important for obese people to be active.

He said: ‘Those with metabolically healthy obesity and decent levels of cardiorespiratory fitness have a quite good overall prognosis from cardiovascular disease and overall survival.

‘Drastic efforts are needed to prevent obesity in the first place and, especially, to prevent conversion to more severe degrees of obesity and the metabolic syndrome.

‘It is prudent to remind ourselves that an ounce of prevention is better than a pound of cure.’

In March a University of Glasgow study of 300,000 middle-aged Britons found the risk of illnesses such as heart attack and stroke increased the fatter they were.