Busy Philipps appeared to be making the most of her 42nd birthday as she was pictured taking a solo stroll in New York City on Friday afternoon.

The Freaks And Geeks actress was seen sporting a very festive outfit as she took to the Big Apple’s streets and sidewalks to get a bit of fresh air on her special day.

Following the performer’s outing, she shared a seaside selfie to her Instagram account to let her 2.1 million followers know how she was spending the rest of her birthday.

Special day: Busy Philipps was seen wearing a stylish seafoam green shirt while stepping out in New York City on her 42nd birthday, which occurred on Friday

Philipps was dressed in a stylish seafoam green heart-printed shirt while stepping out on her own.

The Dawson’s Creek actress partially tucked her top into a pair of loose-fitting and slightly cuffed denim shorts, which were complemented by a vibrant set of dark yellow sandals.

Her beautiful blonde hair, which she usually keeps free-flowing, was tied up in a tight bun for the length of her time in New York City’s streets.

She accessorized with a stylish pair of wide-framed white sunglasses and carried a pink backpack and a white purse with her during the outing. 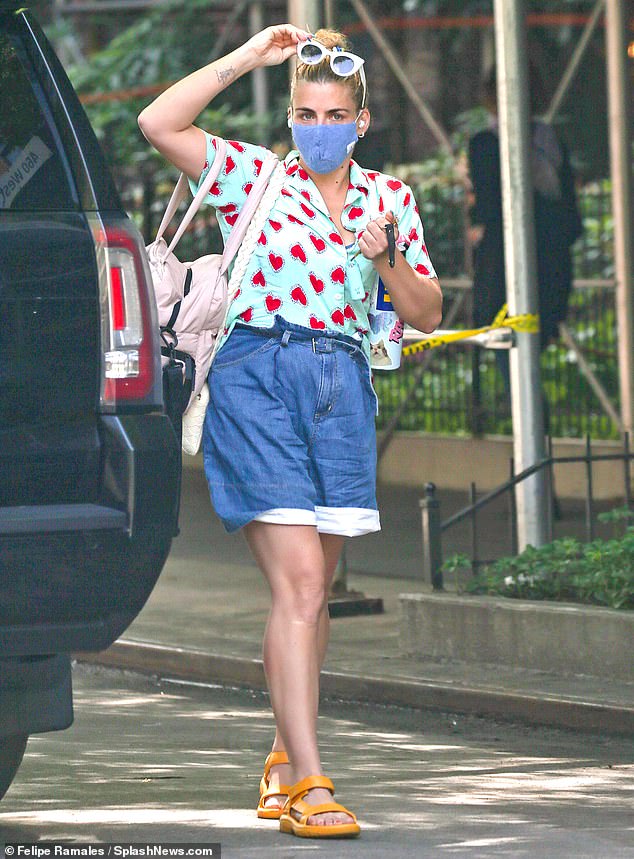 Fresh dressed: The performer contrasted her top with a pair of loose-fitting denim shorts and a pair of dark yellow sandals

Philipps notably sported a blue facial covering to keep herself protected from COVID-19 while she spent time in public.

After returning home following the end of her solo excursion, the performer changed into another outfit and headed out towards the city’s waterfront to take a selfie, which she shared on her Instagram account.

The actress was seen wearing a blue-and-white patterned shirt that remained partially unbuttoned during her outing.

She also wore several eye-catching necklaces and a single gold earring while spending time by the waterfront and let her hair hang partially loose.

Philipps also wrote a short message in the post’s caption that made reference to her birthday and read: ‘Ok fine. I’ll turn 42 today.’ 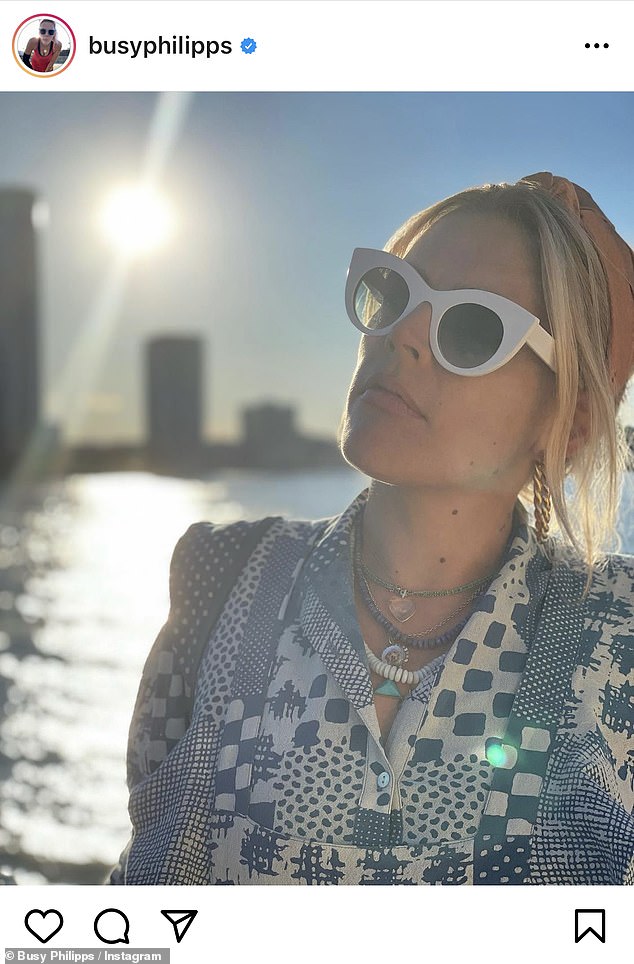 Marking the occasion: Later in the day, Philipps shared a selfie to her Instagram account to commemorate her 42nd birthday

Although she appeared to be making the most of her birthday, the actress is currently prepping to begin work on the second season of her musical comedy show, Girls5eva.

The series is focused on the members of a one-hit-wonder girl group who are given a chance for a comeback when a popular rapper samples their breakout track.

The program also stars Sara Bareilles, Paula Pell and Renee Elise Goldsberry, who round out the rest of the band.

Ashley Park and Jonathan Hadary perform in recurring roles, and Tina Fey notably serves as an executive producer on the project. 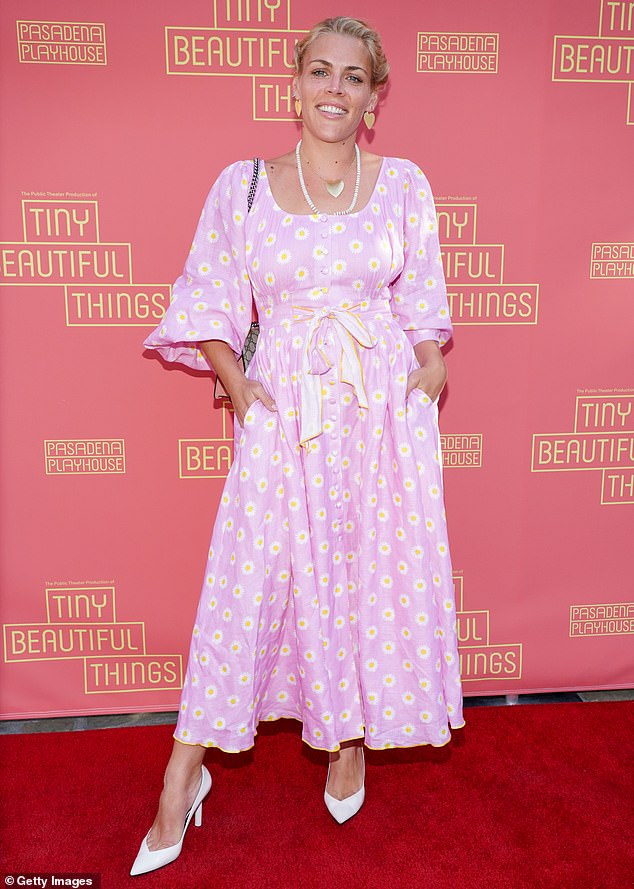 Doing her thing: The actress is currently prepping to begin work on the recently-greenlit second season of her Peacock musical comedy series Girls5eva; she is pictured in 2019 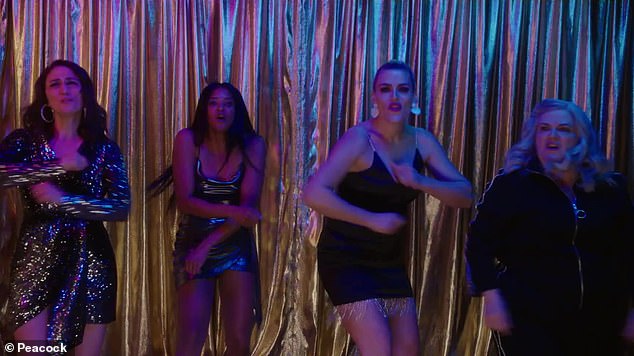 Storyline: The show is centered around four members of a one-hit-wonder girl group who are given a chance for a comeback after their breakout track is sampled by a popular rapper

The Meredith Scardino-created show made its debut in May and was met with widespread critical acclaim, with many reviewers pointing to the performances of its cast and the original tracks written for the series as two of its strongest points.

Earlier this month, it was reported that Girls5eva had been renewed for a second season due to its strong performance with both audiences and critics.

In a statement via Deadline, NBCUniversal Television and Streaming’s President of Scripted Content, Lisa Katz, expressed enthusiasm about keeping the show’s story going in the future.

‘It was hard to miss the immediate fandom that was born after the launch of this series…We look forward to following this group’s journey as they continue to hit just the right notes,’ she said. 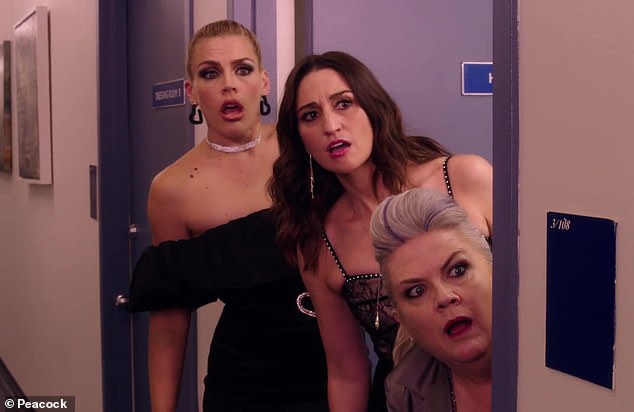 Making an impression: Girls5eva debuted in May and was an instant hit with critics and audiences alike