Hardline judge Ebrahim Raisi was inaugurated as the new president of Iran on Tuesday.

Known as the ‘Butcher of Tehran’ over accusations he had pregnant women tortured and prisoners thrown off cliffs, Raisi immediately vowed to tackle ‘oppressive’ US sanctions.

He replaces moderate president Hassan Rouhani who secured the landmark 2015 nuclear pact with the US, Britain and other major powers to limit uranium enrichment – used for making atomic bombs.

‘Following the people’s choice, I task the wise, indefatigable, experienced and popular Hojatoleslam Ebrahim Raisi as president of the Islamic Republic of Iran,’ Ayatollah Ali Khamenei wrote in a decree read out by his chief of staff.

The 60-year-old’s first priority will be to haul Iran out of dire economic straits wrought by the pandemic and swingeing international sanctions over its breaching of the nuclear deal. 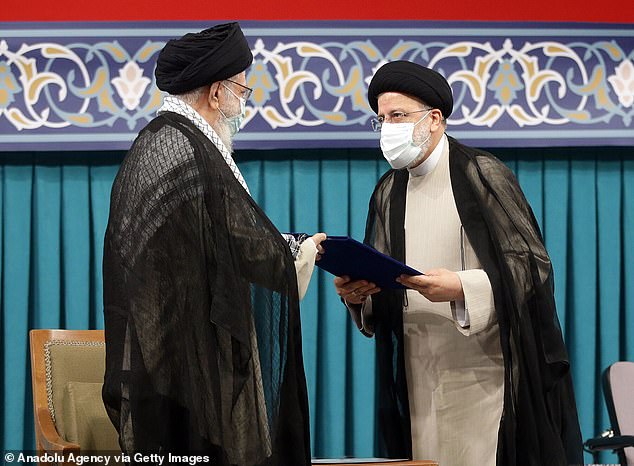 The Butcher of Tehran 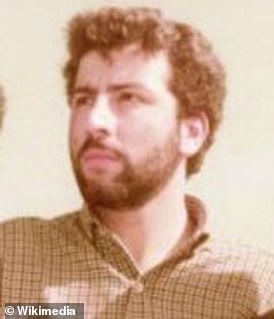 Born on December 14, 1960 to a strictly religious family, Ebrahim Raisi was destined for a clerical education.

He studied Islam at some of the country’s most prestigious seminaries as a teenager and holds the title of hojatoleslam, which means ‘authority on Islam.’

In Iranian clerical hierarchy, it is second only to the rank of ayatollah.

His judicial career started after the Islamic Revolution in 1979 when aged just 20-years-old, he was appointed prosecutor of Karaj – a suburb of Tehran.

From these beginnings, Raisi rose the ranks of the judiciary before being appointed the deputy prosecutor general of Tehran in 1985.

He came to the attention of the country’s fearsome dictator Ayatollah Khomeini who granted him special legal powers over further territories.

In 1988, while Raisi was still the justice chief of the capital, the Iranian government carried out a political purge which saw as many as 30,000 people executed.

Children as young as 13 were hanged from cranes six at a time, pregnant women were tortured and killed, and prisoners both male and female were raped and subjected to humiliating torture.

The Butcher was a member of Tehran’s ‘death commission’ at the time – a type of kangaroo court which was set up across the country to send thousands to their deaths.

Raisi is accused of personally flogging prisoners with electrical cables, ordering his henchman to torture pregnant women and of invoking a rare judicial order for condemned men to be executed by being thrown off cliffs.

The purge is believed to be without precedent in modern political history both in terms of its scope and the extent to which it has been covered up.

Amnesty International gives a lower estimate of at least 5,000 executions during the purge, however other historians put the death toll at 30,000.

Raisi, who is personally sanctioned over human rights abuses, declared that in dealing with the West he would ‘not tie the nation’s standard of living to the will of foreigners.’

‘We believe the people’s economic position is unfavourable both because of the hostility of our enemies and because of the shortcomings and problems inside the country,’ he said.

In his response, Khamenei acknowledged Iran suffered from ‘many shortcomings and problems,’ but quickly added: ‘The country’s capabilities are even more numerous.

Raisi won a presidential election in June in which more than half the electorate stayed away after many heavyweights were barred from standing.

A former judiciary chief, he has been criticised by the West for his human rights record.

Raisi was the deputy prosecutor general of Tehran in 1988 – a year notorious for the execution of thousands of political prisoners over a five month period.

Children as young as 13 were hanged from cranes six at a time, pregnant women were tortured and killed, while there are various reports of rapes of both male and female detainees.

The Butcher was a member of Tehran’s ‘death commission’ at the time – a type of kangaroo court which were set up across the country to send thousands to their deaths.

The purge is believed to be without precedent in modern political history both in terms of its scope and the extent to which it has been covered up.

Amnesty International gives a lower estimate of at least 5,000 executions during the killings, however other historians put the death toll at 30,000.

Tuesday’s ceremony marked Raisi’s formal accession to office. He will next be sworn in before parliament on Thursday when he is to submit his proposed government line-up.

Raisi’s presidency will consolidate power in the hands of conservatives following their 2020 parliamentary election victory, marked by the disqualification of thousands of reformist or moderate candidates.

Iran’s economic woes, exacerbated by US sanctions, will be the new president’s top challenge, said Clement Therme, a researcher at the European University Institute in Italy.

‘His main objective will be to improve the economic situation by reinforcing the Islamic republic’s economic relations with neighbouring countries’ and others such as Russia and China, Therme said.

The 2015 deal saw Iran accept curbs on its nuclear capabilities in return for an easing of sanctions.

But then US president Donald Trump withdrew from the accord three years later and ramped up sanctions again, prompting Tehran to pull back from most of its nuclear commitments.

Trump’s successor Joe Biden has signalled his readiness to return to the deal and engaged in indirect negotiations with Iran alongside formal talks with the accord’s remaining parties – Britain, China, France, Germany and Russia.

The US sanctions have choked Iran and its vital oil exports, and the economy contracted by more than six percent in both 2018 and 2019. 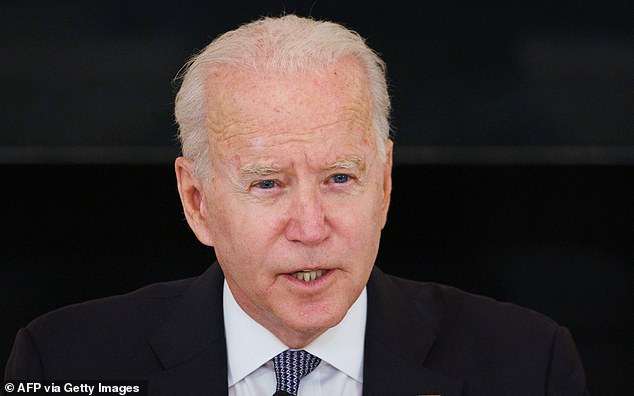 Trump’s successor Joe Biden (pictured at a meeting inside the White House on July 30) has signalled his readiness to return to the deal and engaged in indirect negotiations with Iran alongside formal talks with the accord’s remaining parties – Britain, China, France, Germany and Russia

And last month, demonstrators in oil-rich Khuzestan province, which has been hit by drought, took to the streets to vent their anger.

On the foreign front, tensions have escalated after the United States and Britain joined Israel in blaming Tehran for a tanker attack off Oman last Thursday that killed a British security guard and a Romanian crew member.

The United States vowed an ‘appropriate response’, while Iran warned Monday that it will respond to any ‘adventurism’.

The economic malaise has been exacerbated by the coronavirus pandemic, which has officially cost more than 90,000 lives and also hit many Iranians in the pocket.

In his final cabinet meeting on Sunday, Rouhani defended his track record but apologised over the ‘hardships’ Iranians have had to endure.

After his election, Raisi made clear that his key foreign policy would be to improve ties with regional countries.

In mid-July, Rouhani said he hoped his successor can clinch a deal to lift US sanctions and conclude nuclear talks.

But Khamenei, whose word is final in policy matters, has warned against trusting the West.

Raisi has already said he will not hold talks simply for the sake of negotiations.

His government will only support talks that ‘guarantee national interests’, the incoming president said.