Confidence is key for any potential England World Cup number one. Jordan Pickford embraces it, Joe Hart is more fragile than the hyped-up Euro 2016 version, and Jack Butland retains his self-belief despite being the resident coconut shy at Stoke City.

Butland, who won his seventh England cap against Italy on Tuesday, doesn’t think his club’s predicament in the relegation places should count against him when Gareth Southgate names his squad this summer.

‘Although it has been a tough season at Stoke, it’s not a marker against me individually.’ insists the 25-year-old. ‘I feel like I’ve played well this season. The England manager thinks I warranted a call-up, which I believe.’

Stoke are at Arsenal on Sunday having conceded an alarming 58 goals in 31 games. With only seven matches left, time is running out to preserve their 10-year stay in the Premier League.

‘We are in a dogfight,’ acknowledges Butland, who feels the recent international break will help him.

‘It was nice for me to go away with England, a different environment, and to switch off from club football and refresh.

‘I felt sharp and was delighted to play against Italy. I can now take that enthusiasm and excitement into the Arsenal game.

‘I’ll be doing everything to make sure I’m on the plane for Russia and still in the Premier League. I’ve never backed down a challenge and we’ve got the ability at Stoke to get out of it.

‘We’ve got games we can win and pick up enough points. I’m determined to do my job as well as I can to make sure the ball is not going in at my end, and hopefully we can get a few at the other end. I believe we can do it.’ 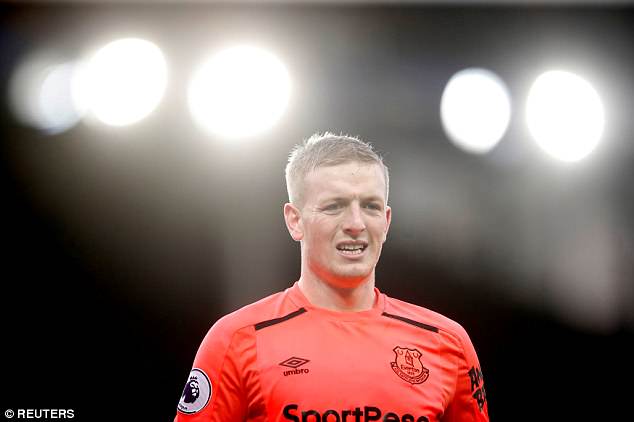 The popular conception is that Everton’s Pickford is a specialist with his feet whilst Butland and Hart are more dominant in their penalty areas.

Butland regards that as simplistic and says he works on his footwork a lot.

‘Training revolves around it every day,’ he says. ‘That element of using your feet and being good with the ball is important and I’ve practised on it for a few years, we work very hard with the goalkeeping coach at Stoke.

‘I feel very comfortable with both feet. It was nice to show that side of my game against Italy. That composure isn’t something that just comes for a goalkeeper, you have to work at it.’

Butland’s mental strength can’t be doubted. A fractured ankle playing for England against Germany in 2016 led to three operations and cost him more than a year of his career.

‘My ankle was a stress fracture, one of those freak ones, and unfortunately I had setbacks in the recovery through no fault of my own,’ he said.

‘I needed surgery to atone for that and repair what was done wrong. There was a lot of frustration; being injured in the first place and missing the Euros and the setbacks in coming back. I ended up missing football for 15 or 16 months, which is a long time. 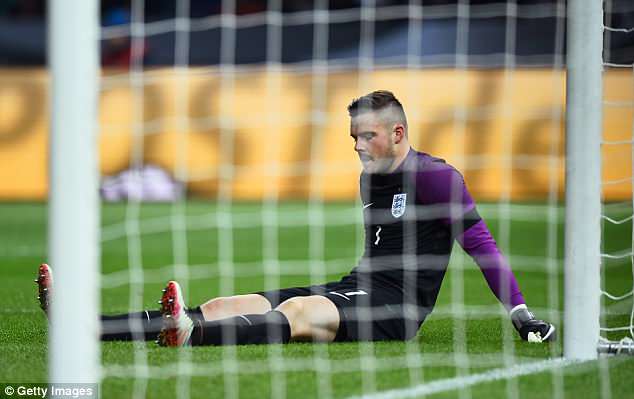 Butland fractured his ankle against Germany in 2016, which led to three operations

‘I always believed I’d get back but sometimes you don’t know. Sometimes you wake up and it’d ache, something wouldn’t feel right and you’d go back to the drawing board.

‘Ultimately I managed to find a great surgeon in Holland who has worked on some of the greats and he got it right within no time.’

Butland mostly dealt with the anxiety internally, though he doesn’t recommend that for everyone.

‘I shouldered a lot of the burden myself. I probably need to speak to a few more people every now and again and let things out,’ he admits.

‘Sometimes my partner and family wanted to talk to me but knew my character, that there wasn’t a lot to be said and I was always going to get there.’

Having come through that massive ordeal, Butland now has the confidence to help save Stoke City – and go to the World Cup as Southgate’s No1.