Buyers looking to negotiate their new home can try to take advantage of a seasonal dip in asking prices, new figures have revealed.

Property website Rightmove said the average asking prices of homes newly listed for sale fell by £2,044 in the past month, as the traditional November slowdown arrived, despite this year’s soaraway housing market.

Asking prices regularly fall slightly each year in November and with sellers downgrading expectations, buyers may have a ‘small window of opportunity’ for a bargain ahead of a post-Christmas ‘buyer boom’, according to Rightmove.

Fall: Average asking prices of homes listed for sale fell by over £2,000 in the past month

In the year to November, average asking prices increased by 6.3 per cent, down from a 6.5 per cent increase the previous month.

Every area in the country, with the exception of the East of England, saw asking prices fall last month.

The online property portal thinks the asking ‘price lull’ will last from now until Christmas, and is urging prospective buyers who do decide to buy, to consider a fixed-rate mortgage deal before the Bank of England’s imminent interest rate hike.

Tim Bannister, Rightmove’s director of property data, said: ‘Despite the soaring property market and consequent shortage of choice of homes for sale for prospective buyers, new sellers have given an early Christmas present by dropping their average asking prices by 0.6 per cent.

‘Sellers who come to market this close to the distractions of Christmas often have a pressing reason to sell, so naturally price more attractively to grab the attention of prospective buyers who may be otherwise occupied.’

He added: ‘December is traditionally the quietist month for buyer activity, making it a good time for serious buyers to grab a relative bargain.’

Richard Palfreeman, managing director at Northfields Estate Agency, said: ‘We often find in November and December that there are vendors who are motivated to secure a sale, and there are some great bargains to be had for buyers.’

Rightmove said the number of people starting the selling process by requesting a valuation from an estate agent via its website was 14 per cent higher in October than a year ago.

The East of England was the only area in the country which saw asking prices creep up over the last few weeks, having risen by 0.5 per cent to £398,116. 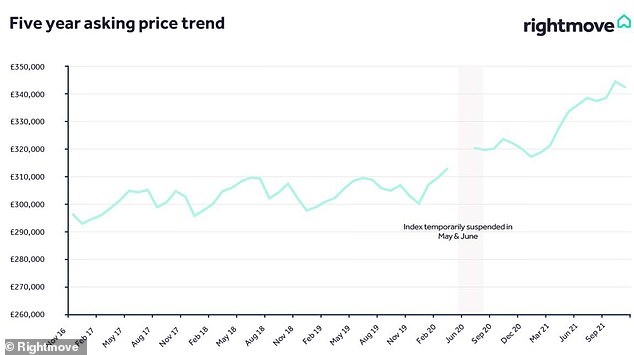 Shifts: Fluctuations in average property asking prices over the past five years

Across the country, average property prices increased by 10.6 per cent to £264,000 in the year to August, up from an 8.5 per cent rise in July, according to the Office for National Statistics published last month.

By contrast, ‘second-stepper’ buyers and those able to afford homes at the top of the market have enjoyed slightly lower asking prices than previously in the last few weeks. Homes at the top of the property ladder are now 1 per cent lower than they were in October, and are now hovering around the £630,819 mark.

Rightmove’s latest figures suggest the time taken for a home to sell has slipped from 37 days to 36 days in the last month.

But, a shortage of homes coming up for sale remains a major challenge for the industry and prospective buyers, with the average number of properties on estate agent’s books falling from 49 to 46 in the past four weeks.

Earlier this month, the Bank of England’s top brass, led by Andrew Bailey, surprised many by keeping interest rates on hold at a record low of 0.1 per cent. But, many now think interest rates could be increased as early as next month.

Some lenders have already hiked rates on their mortgage deals in anticipation, and there is mounting speculation about what will happen to the property market and house prices once higher interest rates become a reality. 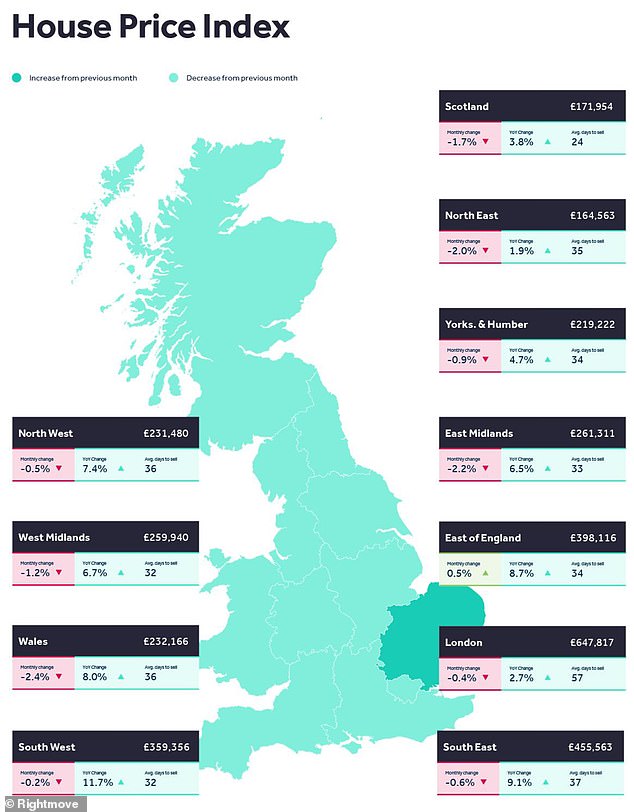 Pattern: Most parts of the country have seen average asking prices fall in the past month