Hundreds of Byron Bay protesters ignored social distancing to challenge the installation of 5G in the town over fears it could lead to an outbreak of the coronavirus.

One protester was injured and another was arrested during the  hostile stand-off in Mullumbimby in northern New South Wales on Wednesday.

The group had gathered after word spread that Telstra workers were at the site making preparations for network upgrades despite a recent Byron Bay councillors unanimously agreed not to support any upgrades that will facilitate 5G technology.

‘Especially in this age of coronavirus, you want to have your immunity as strong as you can,’ he said.

Footage of the clash shows protesters yelling ‘No 5G’ under the watchful eye of police who were there to protect Telstra workers.

Mr Jefferys later posted videos of the incident to Facebook, showing him being arrested and dragged by police into a paddy wagon after he tried to stop a truck intending to remove a car that was blocking 5G installing equipment.

Mr Jefferys later claimed on Facebook another person was hit by the truck and taken away in an ambulance.

Mr Jefferys said he was later released without any charges laid.

The demonstrators were angry 5G is being installed during a lockdown in the hope of avoiding community opposition.

‘This is clearly against the community’s desires as expressed recently when thousands of residents turned up at Mullumbimby councils chambers and public meetings,’ Mr Jefferys said.

‘People who attended the protest mainly kept a safe distance from everyone else. Yet when I made my sit down protest that I am allowed to do under our constitution and I ask police to keep a safe social distance I was instantly arrested.’ 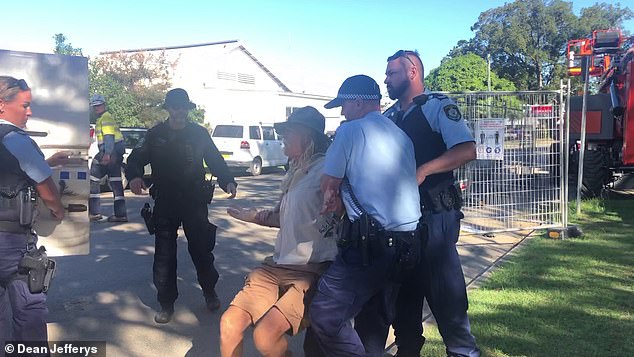 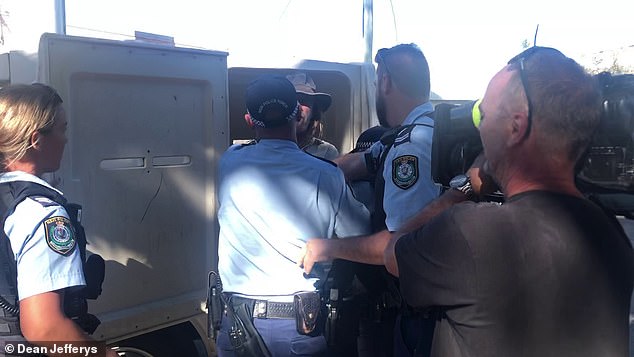 Another protest has been organised for Thursday.

‘Rolling 24 hour protests will happen at the proposed 5G tower behind the Mullumbimby Post Office from 8am,’ Mr Jefferys said.

‘People will be turning up to protests every day until this is stopped and the real health concerns of the local residents are satisfied.

‘With only around 10 new cases of CV (COVID-19) in all of Australia yesterday it appears obvious the war on coranavirus is almost over.

‘Now we just have to be careful that tyranny doesn’t become the new threat.’

The protest is breaking coronavirus social distancing rules as Australians are banned from gathering in groups of more than two people.

A number of people were dismayed that the group who were concerned for their health had chosen to to break social distancing rules.

‘So with Covid as a real, serious health threat, a group of misinformed people gave up social distancing to follow a extreme right wing conspiracy theory,’ one person wrote.

‘Why are they being  so dumb,’ another wrote.

‘Police should have issued all a $1,000 fine for not staying home and being out at a non essential place,’ another wrote. 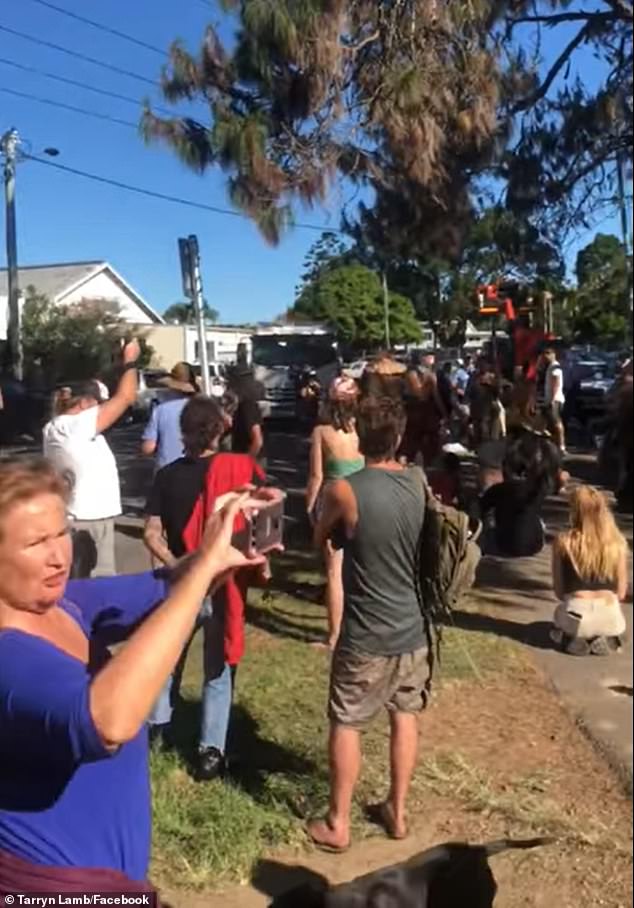 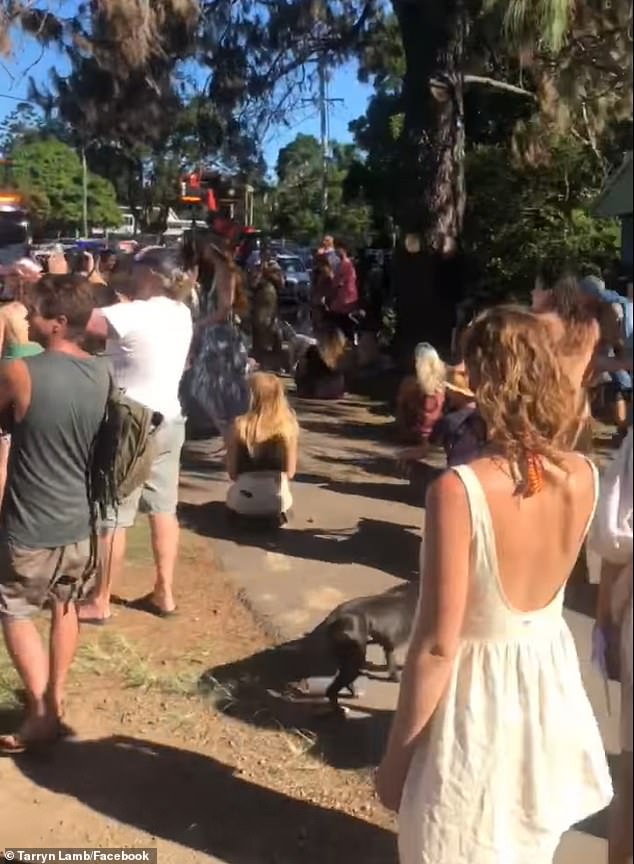 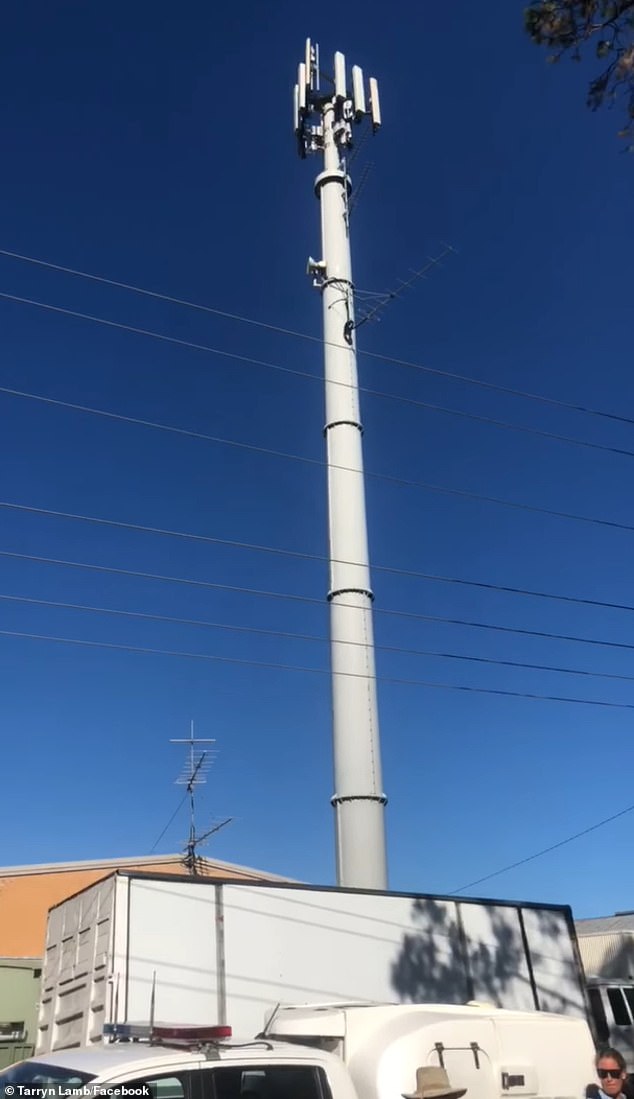 A Telstra spokeswoman wouldn’t comment on the specific incident but said 5G coverage will be rolled out to 35 Australian cities by the end of June.

‘To date, we have commenced the rollout of 5G in 32 cities around Australia,’ she told Daily Mail Australia.

‘Our rollout has been focused on cities, regional centres and high traffic areas with a view to offering 5G to as many of our customers as fast as possible.’

Interest in ridiculous theories that the ultra-fast mobile technology causes coronavirus have swept across the globe during the health crisis, despite experts’ desperate efforts to debunk the claims.

There was a flood of interest when 5G technology was first rolled out Australia last May before being renewed when the pandemic hit Australia’s shores earlier this year.

He also refuted claims 5G technology is harmful to our health.

‘At this time in the fight against the epidemic, this is dangerous nonsense. Even to have a few people think differently that social distancing isn’t for them is a silly idea and is putting all of us at risk.’

‘For some people, the idea of a conspiracy theory turns them on. Most of the time, it doesn’t matter that much but in this particular case, it’s dangerous.’