‘It knocked him clean off his board’: Friend of surfer bitten by a shark in Byron Bay recalls the terrifying moment the great white attacked

The roommate of a man bitten by a great white shark has recalled the terrifying nature of the shock attack.

The 41-year-old victim was surfing at Belongil Beach in Byron Bay on Sunday morning when he was bitten on the leg by a shark and rushed to hospital by helicopter.

Roommate Dane Davidson later told the ABC the pair had only just entered the water when the attacked happened.

‘As soon as my mate got out the back he sat up on his board and instantly a shark smashed from underneath … knocking him clean off his board,’ he said.

‘I was freaking. When I heard the screams he was making in the water and then I saw a chunk of his board floating off, that’s when I realised it was pretty bad.

‘We didn’t realise until we were on the beach that there was a big chunk taken out of his leg so there was a lot of blood.’

Emergency services rushed to the scene, on the outskirts of the holiday town, at 6.40am after the injured man returned to shore with assistance.

He was treated at the scene before before being air-lifted to Gold Coast University Hospital in critical but stable condition.

Both Belongil Beach and Byron’s Main Beach will be closed for the next 24 hours.

Officers from Byron Police District will liaise with Department of Primary Industry to investigate the circumstances surrounding the incident. 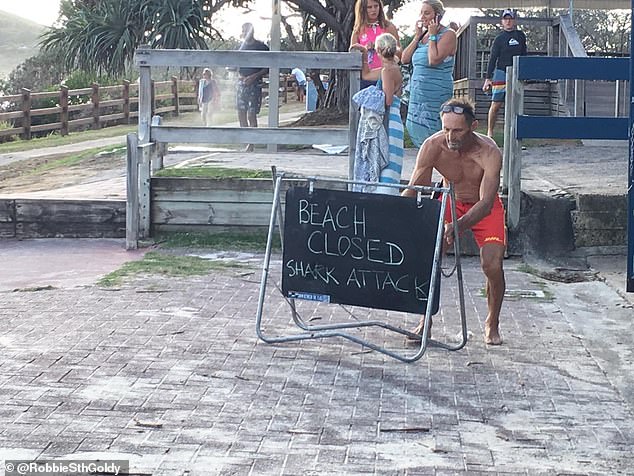