A teen skywatcher claims to have captured a UFO hovering near an RAF base – and is convinced it could be something extraterrestrial.

Lucas Budel, 19, said he spotted the mysterious aircraft near his home in High Wycombe, Buckinghamshire.

The town is home to the RAF base which used to investigate UFO sightings and which now houses Headquarters Air Command.

In the video, a white mass can be seen making unusual movements in the sky, leaving wispy trails behind it as it goes.

Mr Budel said: ‘I was just sitting in my room at my computer when I saw an extremely bright light out my window falling from the sky.

‘I initially thought it was a meteor falling, which is already quite unusual to see, until its motion stopped for a few seconds and went back up.

‘I was so in awe that I didn’t have time to record it. It then disappeared.’

But when the supposed UFO reappeared, Lucas was ready. ‘I went back to my desk and got my phone so when I saw it again I used that to record it,’ he said.

‘The best way to describe it was like an electrical cloud moving in alternating directions continuously.

‘At one point it looked as if red sparks or electricity was flying out of it.

‘At another point it seemed like whatever it was lost its power and started falling to the ground before the ‘engines’ started back up.’

Lucas claims he also witnessed the UFO split in two, becoming two separate bodies of light. ‘I’m positive that it was some strange phenomena,’ he said. 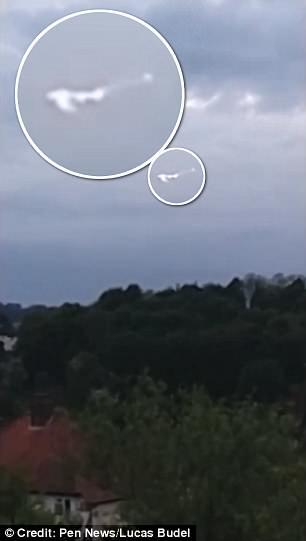 Teen skywatcher Lucas Budel, 19, claims to have captured a UFO hovering near an RAF base near his home in High Wycombe, Buckinghamshire

‘Be it ball lightning, military testing or something extraterrestrial. It looked like a vaporising electrical cloud.

‘Someone also said it could be an RC plane but from what I saw it didn’t seem like that at all.

‘I’ve never seen anything else like this, specifically in my area.’