Cabinet ministers ‘believe Theresa May will be gone within weeks’

Theresa May’s cabinet ministers believe the Prime Minister will be ‘gone in weeks’, after another disastrous week that saw her Brexit deal rejected for a second time.

Mrs May’s deal lost by 149 votes on Tuesday, with 75 rebels from her own party as well as the 10 DUP MPs breaking ranks.

The following night, 13 ministers broke ranks and voted to take No Deal off the table.

On Thursday, eight members of the cabinet – including the Brexit secretary, Steve Barclay and leader of the house Andrea Leadsom – voted against Mrs May’s ultimately successful motion to extend article 50.

One cabinet minister has now told The Sun that they believed the chairman of the 1922 committee, Sir Graham Brady, would have to ‘tap her on the shoulder’ and suggest that she leave her post.

They told the paper: ‘I can’t see this continuing beyond the next few weeks. Either she’ll have to go to get her Brexit deal through or they’ll be a vote of confidence.’

But there are hopeful signs that it might be third time lucky for the Prime Minister when it comes to pushing her deal through parliament.

Brexiteer opposition to the deal appeared to be softening today as leading Tory MP Esther McVey admitted she and other rebels could now ‘hold their noses’ and back it.

The Cheshire MP, who resigned as Work and Pensions Secretary over the deal four months ago, said Leaver MPs will ‘have to think a different way’ when the Prime Minister’s EU divorce returns to the Commons next week.

And a Survation poll for the Daily Mail found that that Conservative voters want hard-line Brexiteer and Remainer Tories to toe the line and back the Prime Minister.

Asked if MPs should back Mrs May in next week’s vote on her EU Withdrawal Agreement, 57 per cent of Tory voters say they should, with 26 against, a margin of more than two to one in her favour.

There are similar majorities among Conservative supporters in favour of Mrs May’s deal to most of the alternatives such as a ‘Customs Union Brexit’, a People’s Vote-style second referendum and putting Brexit back to 2021. 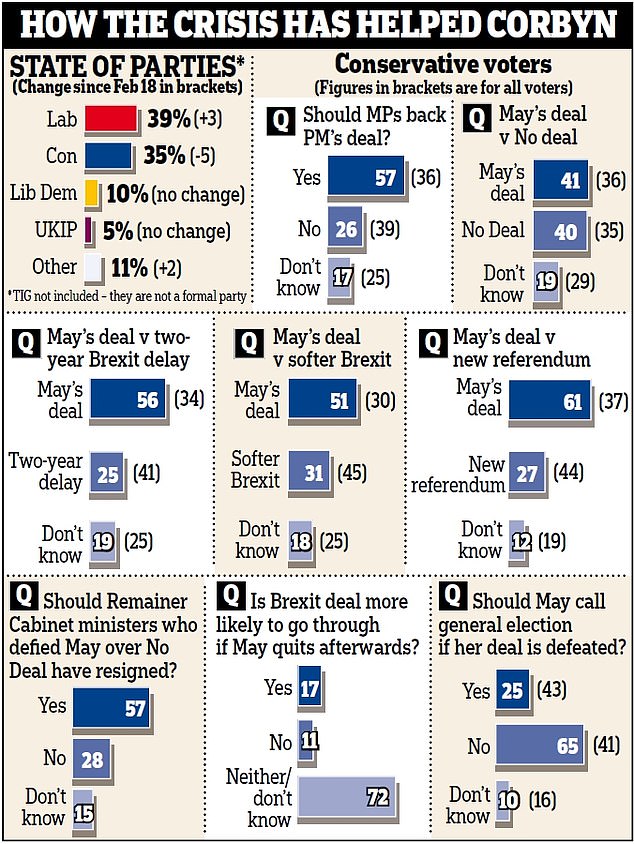 The Prime Minister survived a no confidence vote from her own party MPs in December, so she cannot be ousted by the Conservatives until the end of the year.

But hard-line Brexiteers have suggested they might even back a no confidence motion submitted by opposition leader Jeremy Corbyn.

Brexit Secretary Stephen Barclay today fuelled speculation he could quit after just months in the key post if Mrs May backs a long extension to Article 50, saying ‘we shouldn’t be afraid to leave with no deal’.

The Prime Minister has said the delay only be until June if Parliament passes her deal – or a much longer one if they reject it a third time.

Her former policy chief George Freeman on Thursday became the first MP to break cover and suggest that a promise of her resignation could be the only way to persuade Eurosceptic MPs to back her deal.