Vince Cable today refused to back down on his suggestion that Brexit voters were driven by ‘nostalgia’ for a world in which ‘faces were white’.

The Liberal Democrat leader signalled defiance after using a speech to the party’s spring conference to claim many older voters were seeking ‘a world where passports were blue, faces were white and the map was coloured imperial pink’.

The jibe drew an angry response, with Brexiteers accusing him of ‘insulting’ ordinary Britons and demanding an apology.

Sir Vince today tried to deny that he had branded Leave voters racist, saying he ‘didn’t suggest that at all’.

But he went on to insist that ‘nostalgia for that world’ was a factor in how people had voted.

‘One of the factors was indeed nostalgia,’ he told BBC Radio 4’s Today programme. ‘Why else has so much fuss been made about the change in the colour of the passport?’

He said one of the most effective pieces of ‘propaganda’ during the referendum had been an advertisement unveiled by then Ukip leader Nigel Farage showing a queue of non-white people with ‘breaking point’ written in large letters.

In his keynote speech to the conference in Southport, Sir Vince renewed his call for a second referendum and said the divide opened up by the June 2016 vote had left the country mired in a ‘protracted, non-violent civil war’.

The former Cabinet minister said the ‘toxic’ fall-out of the Brexit referendum was fuelling the rise of the populist right in Britain.

He said: ‘I confess that my own initial reaction to the referendum was to think that maybe there was little choice but to pursue Brexit.

‘What changed my mind was the evidence that Brexit had overwhelmingly been the choice of the older generation.’

The campaign group Leave.EU criticised Mr Cable’s comments, saying his ‘insulting assumption’ did not explain why the UK had voted to leave a union of ‘predominantly white European nations.’

Tory MP James Cleverly said it was prejudiced to say that the referendum result was driven by ‘casual racism’.

‘It certainly wasn’t the reason I voted for Brexit,’ he said, according to City AM.

Andrew Rosindell, the Tory MP for Romford, said: ‘Sir Vince Cable should apologise for his remarks. He has just insulted the very people who gave us the nation we have today, a free and prosperous society, a country with a proud history as well as an exciting future.

‘The post-war generation were wise enough to judge that Britain’s future depends on the UK being a global, outward looking nation and voted in the interests of future generations, unlike Sir Vince who has placed himself the wrong side of history with his obsession with the EU. 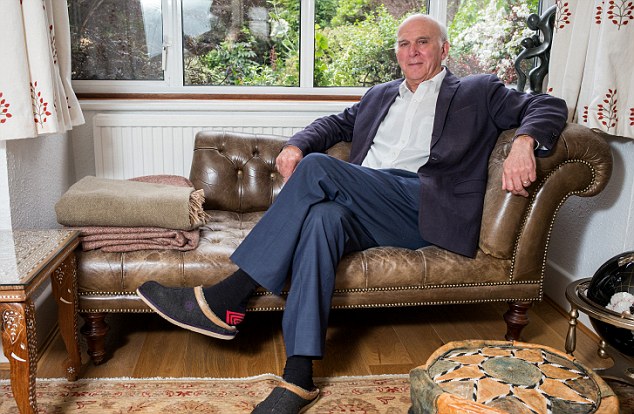 ‘It seems the Liberal Democrats are neither liberal nor democratic in seeking to undermine Brexit.’

The Lib Dem leader said it was clear the EU would end up dictating the terms as the UK government was divided over what it wanted to achieve.

‘This will, in turn, create the sense of victimhood Brexiteers crave – being under the European yoke,’ he said.

‘I would go so far as to say Britain is now mired in a protracted, non-violent civil war.

‘Allied to the poisonous rhetoric about ‘traitors’ and ‘saboteurs’, and what Theresa May calls ‘citizens of nowhere’, we have a toxic brew which fuels the populist right.

‘It was never a good idea to leave the EU. To leave it now borders on extreme recklessness.’

He said that he wanted to see his party follow the example of the Canadian Liberal Party under Justin Trudeau to build to lead a ‘new groundswell for political renewal’.

‘The Canadian liberals engaged all their registered supporters – their voters – as well as their members in leadership elections and candidate selection. They became a new party; a movement,’ he said.

‘Building on our own traditions, we must address how we in the Liberal Democrats can become a movement for those who are alienated by the Conservatives and Labour.

‘So as a party I want us to think big. To be as radical and forward-looking with our ambitions for the party as we are with our ideas and our policies.’