Wispa bars have become the latest casualty of Cadbury’s shrinkflation as it was revealed the brand has cut back the chocolate treat by seven per cent – but continues to sell it for the same price.

According to The Sun, the popular chocolate treat has seen a shrinkage in size across the range, with the Duo reduced by almost 4g, or 7 per cent, while 10-packs lost 18g and 4-packs lost 8.4g.

The single bars are now 36g and 199 calories. Despite being cut back in size, a single bar of Wispa still costs 80p.

Chocolate fans were quick to slam the changes, with one commenting on the Tesco website: ‘How can they possibly make the bars any smaller and for the same price as the previous 10 x 25.5g. This is no longer value for money.’

The ‘shrinkflation’ will spark concerns that it is a new attempt to raise prices by stealth, based on the company’s record of shrinking products without offering a corresponding cut in the price.

Cadbury has previously claimed it was cutting back the size of multipack treats to below 200 calories in an attempt to tackle obesity.

Cadbury’s American parent company Mondelez International has previously said it planned to offer greater portion control options by committing to bringing all Cadbury multipack chocolate bars under 200 calories by the end of 2021.

But experts have said the phenomenon is actually being driven by soaring demand for cocoa alongside reduced yields because of climate change.

They fear in future that quality may drop as confectioners are forced to tweak ingredients to cope.

The revelation about Wispa’s size comes after customers were left outraged as a smaller pack of four-bars appeared on the Tesco website last August. 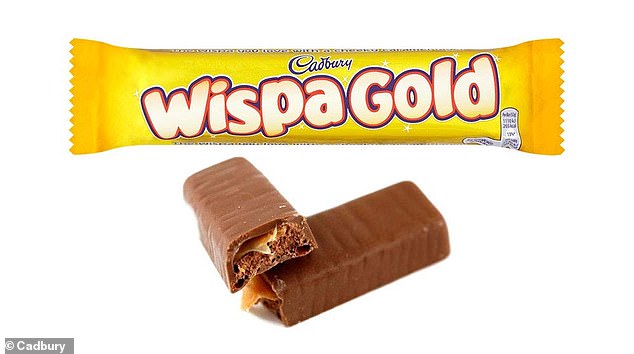 So could YOUR favourite chocolate bar be the next to shrink?

From Snickers and Maltesers to Toblerones and the much loved Chocolate Orange, many of the most famous chocolate brands have dwindled in size over the last ten years.

It’s the curse of shrinkflation; the phenomenon which sees products remain the same price – or even become more expensive – even though they’ve been reduced in size.

In the past companies have blamed shrinkage on the rising cost of ingredients, arguing that shoppers would have to pay substantially more if the products remained the same size as they’d always been.

However Cadbury claim it has opted to cut back on size to reduce calorie count and help tackle childhood obesity.

In 2020 it announced plans to shrink multipack bars to below 200 calories to help tackle childhood obesity.

But the shrinkage of Wispa could be a sign they’re applying the same logic to single bars.

So which of your other favourite bars could be at risk of the shrink?

One person wrote: ‘No different than usual. The only thing new about them is that they are smaller than previous.

‘Let’s con the public and advertise them as new.’

And another said: ‘Very disappointed by another product affected by a reduction in size yet branded new.

‘Same taste but smaller size yet no reflection on the price ! Baffling or what?’

In 2020, the company shocked chocolate fans  when it shrank down four of its most popular bars in an attempt by the confectionary giant to tackle obesity.

Among the chocolate bars that were cut back were Wispa Gold, Boost and Double Deckers. 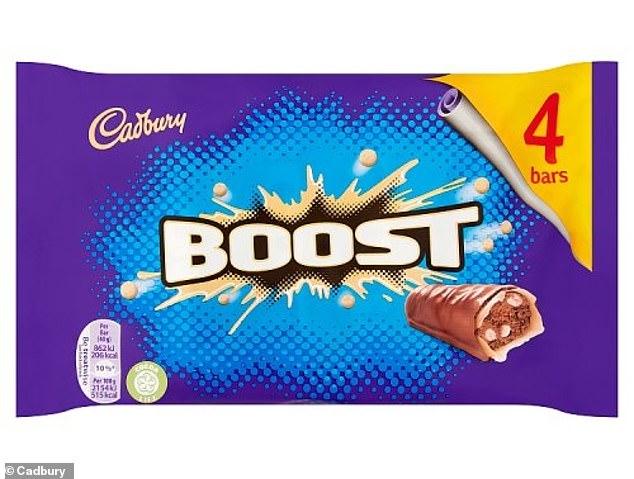 The change affected multipack bars. It was an attempt by the confectionary giant to tackle obesity, with the new size meaning the bars contained less than 200 calories – however the price remained the same.

The shrinkflation tactic meant the multipack bar would have to lose 36 calories to bring it under 200.

However Twitter users reacted negatively to the news that Cadbury would be shrinking some of its most popular bars, claiming it was the latest catastrophe of 2020.

One tweeted: ‘Well this is the year that keeps on giving. Cadbury to shrink size of Wispa Gold and Double Decker bars.’ 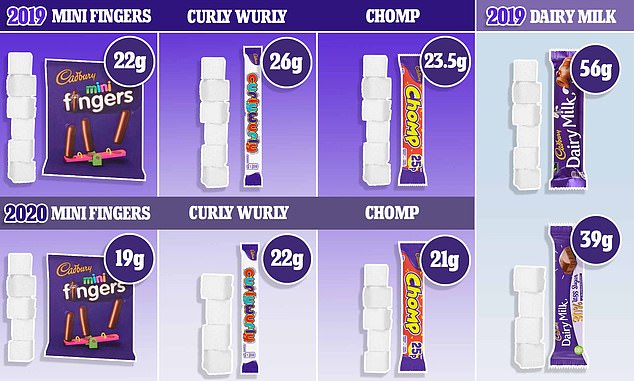 Pictured: How the Cadbury’s snacks shrank in 2020, following on from the release of a lighter Dairy Milk (far right)

Another commented: ‘They’re shrinking Wispa Gold and Double Decker: who’s up for marching on the Houses of Parliament this weekend?’

And it’s not the first time the company has horrified chocolate fans.

In 2019, Cadbury announced it was shrinking its Curly Wurly, Fudge bar and Chomp among other products to bring them in under 100 calories.

Other products due to be put under the Cadbury shrink ray before the end of this year include the Fudge bar (114 calories) which required a cut from 25.5g to 22g, and the Chomp (110 calories) which went from 23.5g to 21g.

Mondelez’s Oreo Mini snack pack and Freddo Face Cakes will be shrunk by the end of 2021. 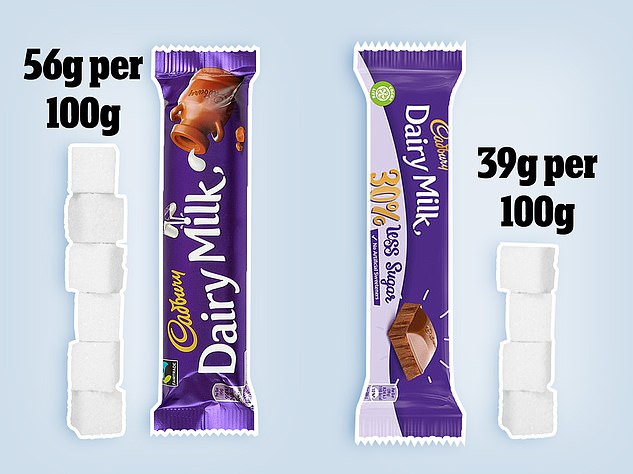 Many companies have decided to reformulate their products, often taking out some of the sugar, in order to reduce the calorie count, however this was rejected by Mondelez for these products.

At the time, the company claimed that the decision to shrink the products aimed at children, rather than introduce a healthier recipe, comes from its ‘commitment to taste’.

UK Managing Director at Cadbury’s parent firm Mondelez International, Louise Stigant, said: ‘We want to play our part in tackling childhood obesity and are focusing on the areas where we can make the greatest impact.

‘Our brands have been around for hundreds of years and play a special role in people’s lives as treats to be enjoyed in moderation.

‘We want to support parents when they choose to give their children a treat and introducing this calorie cap will make it simpler for them to find a treat under 100 calories that children will enjoy.’

As long ago as 2009, Mars in Australia ran a massive marketing campaign based on this theme to justify cutting the size of the Mars bar.

At the time, politicians described the move, which saw no corresponding price cut, as underhand.

In November last year, it was revealed Cadbury’s had cut the size of its popular Christmas selection box for the third consecutive year by shrinking the Wispa and Double Decker bars.

It meant chocolate fans were getting 24g less chocolate in their boxes than they did three years ago.

This is the equivalent to losing an entire Fudge bar. 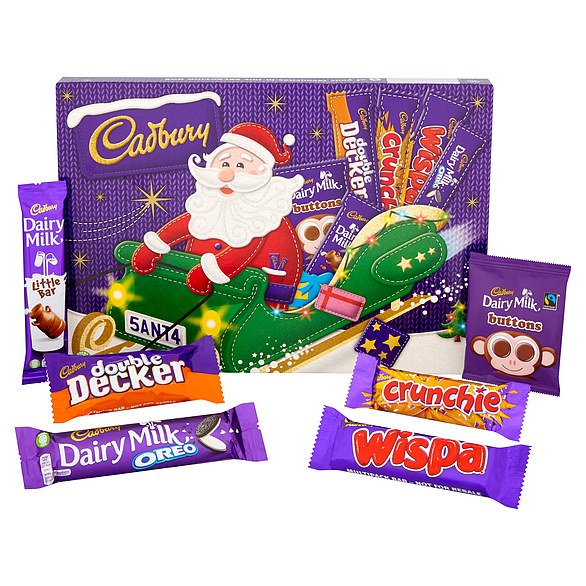 Experts described the change as ‘shrinkflation’, where the amount of product you get reduces despite the price remaining the same.

This year the box is still on sale for £2 – the same as in recent years – but the cheapest offer price available in some supermarkets is £1.25, up from £1 last year.

Former British brand Cadbury’s, now owned by US food giant Mondelez International, caused outrage in 2018 when it removed the beloved Fudge from the selection box and replaced it with an Oreo bar.

Although it brought Fudge back in 2019, it shrunk the total weight of chocolate in the box to 153g.

Then last year, it caused further controversy when it cut 12 per cent off the Fudge – shrinking it from 25g to 22g. This meant the total weight of the box dropped to 150g.

At the time, it claimed it was part of a move to ensure all its chocolates aimed at children were under 100 calories, to help ‘tackle childhood obesity’.

But neither the newly-shrunken Wispa nor Double Decker meet the 100-calorie target. 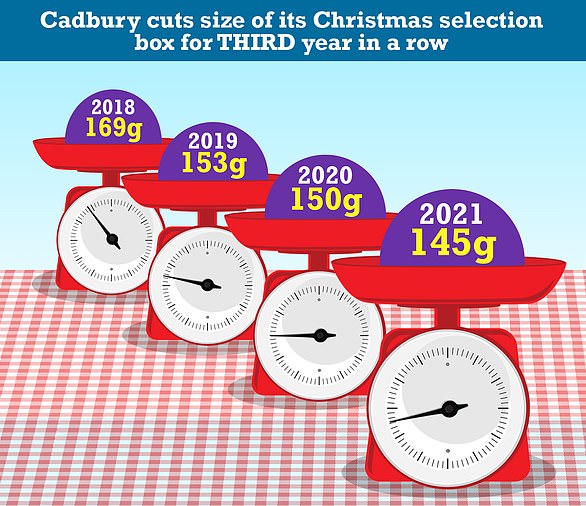 Back in 2018, the Santa Selection Box weighed 169g, and this year the seasonal chocolate gift weighs just 145g

The Wispa contains 152 kcal and the Double Decker is 171 kcal.

It means customers are paying more for less chocolate.

James Daley, consumer expert at Fairer Finance, said: ‘Reducing the amount of chocolate in the packet, while keeping the price the same – or worse still, increasing it – feels devious.

‘Manufacturers should be forced to let consumers know when they make changes like this – or better still, they should stop doing it altogether.’

A Cadbury’s spokesman said: ‘We will always look to absorb as many additional costs as possible.

‘However, we sometimes have to make decisions to slightly reduce the size or weight of our products to continue keeping them as affordable as possible, while keeping the great quality taste fans of Cadbury expect.’

They added the move was also part of its target to reduce all adult multipack chocolates to under 200 calories by the end of this year.