A cafe has been bombarded with negative reviews after putting up a sign banning parents from changing their children’s nappies in their bathrooms.

Barley Cafe in Palmerston North, New Zealand has been slammed by scathing reviews online after requesting parents change their kids nappies in the plaza bathroom nearby.

A sign was posted on the bathroom door which read: ‘This is not a nappy changing station. If you require those facilities, the Plaza will be able to accommodate you much better. Just remember the people who have to clean that mess are the same people who serve you food.’

The sign led to Barley copping terrible reviews from many customers, with some from people who had never been to the cafe.

The complaints have since been deleted, with Barley Cafe currently holding a 4.5 star rating on Trip Advisor.

Barley Cafe owner Matt McNelis stood by his bathroom sign, referencing the ethos of his business in being a sustainable waste free cafe.

‘We went on record when opening that we were aiming to become completely zero waste, anyone who has worked in a commercial eatery will understand what a huge task that is, cutting out all non reusable, non compostable, non biodegradable materials is a massive and somewhat expensive task,’ Mr McNelis posted on the cafe’s Facebook page.

‘Our toilet facilities are small and tidy, there are the compulsory sanitation bins installed in each.

‘We went through a spate of people changing their children in these facilities and being unable to force their nappies into said bins would try flush them, blocking the toilets, leave them in the sinks, on the floor or behind the doors.

‘Now Barley is a small business with a small number off staff, if these people had asked staff where these nappies could be disposed of we would’ve been happy to help, we have a small bin for non recyclables out the back.

‘This never happened. Instead myself or my staff had to stop service, don protective gear and thoroughly sanitize the facilities.

‘Because this had happened on a few occasions we took the action of putting signs up asking that as we’re not equipped with changing stations could you please use the plaza facility which is 30 seconds walk from our door.’ 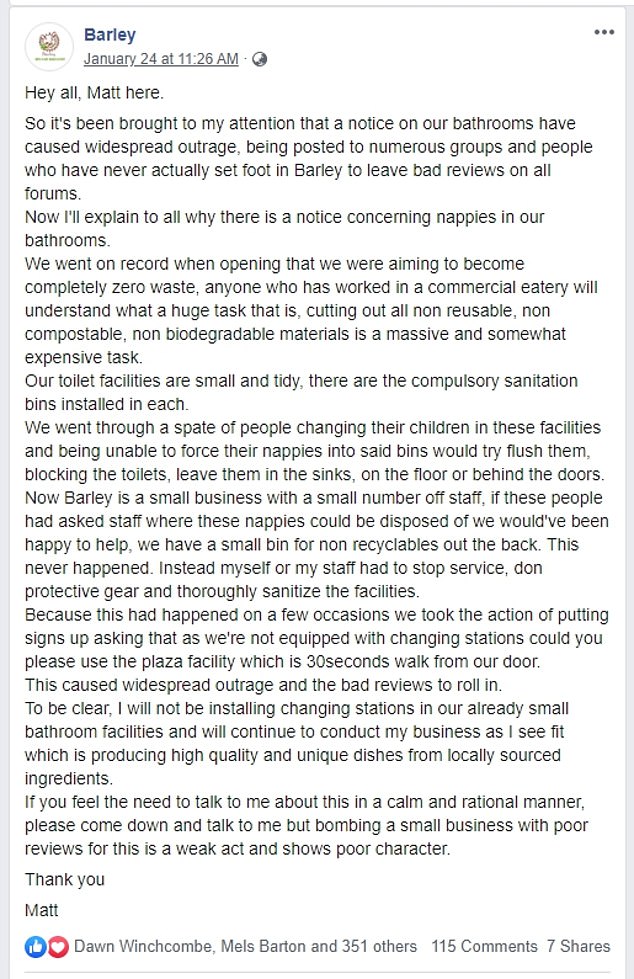 Mr McNelis believes the social media backlash his business received was unwarranted and hoped that parents would be more considerate before attacking a small business.

‘To be clear, I will not be installing changing stations in our already small bathroom facilities and will continue to conduct my business as I see fit which is producing high quality and unique dishes from locally sourced ingredients,’ his post continues.

‘If you feel the need to talk to me about this in a calm and rational manner, please come down and talk to me but bombing a small business with poor reviews for this is a weak act and shows poor character.’