A leader with the Cajun Navy has said that looters fired upon rescue boats that were attempting to assist flood victims of Hurricane Harvey.

Clyde Cain, an organizer with the Louisiana Cajun Navy, said on Monday that no one was injured when apparent looters fired guns at volunteer rescuers earlier in the day in Houston.

The group is one of several gathering volunteers with leisure boats to assist desperately over-extended first responders in search and rescue efforts as the flood waters from Harvey continue to rise.

‘It came over [the radio] and it was looters who are out there and not wanting our boats around them,’ Cain said in a live video stream on Facebook. Cain said it was also possible the looters were attempting to steal the boats.

Volunteers with leisure boats have stepped in to assist with search and rescue in Houston, but one leader says looters have fired shots at some of the rescuers. Pictured: Volunteers stage their rescue boats on Sam Houston street on Monday 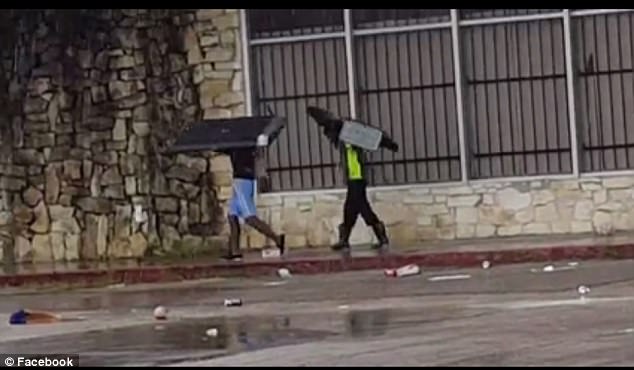 Looters are seen in a video showing two men stealing flatscreen TVs from a Metro PCS in Houston on Sunday. There have been sporadic reports of looting in the city and now a volunteer says shots have been fired at rescue boats

There have been sporadic reports of looting during the devastating flooding in the Houston area, but police said Monday that only four looters had been arrested.

‘No one got injured… no one actually got shot, they shot at the boats,’ Cain said, attempting to quell online rumors that volunteers had actually been shot.

Cain said that the volunteers returned to the area with law enforcement, but the offenders were no longer on the scene.

Volunteer rescue attempts are continuing with caution as conditions permit, he said.

‘There’s looters out here, as in any time you have a natural disaster or catastrophe,’ Cain said, adding ‘we’re ok.’ 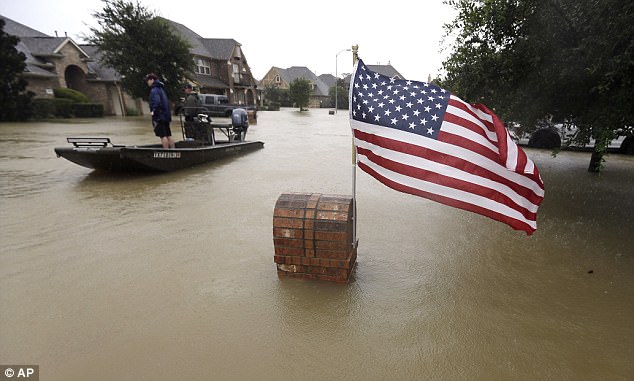 Huge swathes of Houston now sit underwater as flood water continues to rush through its streets.

Thousands are without homes, even more have lost power and 11 people are feared dead across the entire state as a result of the storm.

There is no respite on the horizon, with another 50 inches of rain scheduled to land over the course of the week.

Many residents have been left no choice but to wait in their homes to be rescued but emergency services have been pushed to the limit. 911 operators are having to choose between life-fearing callers and panicked residents are clambering to their roofs to wave towels in the hope that someone will rescue them. 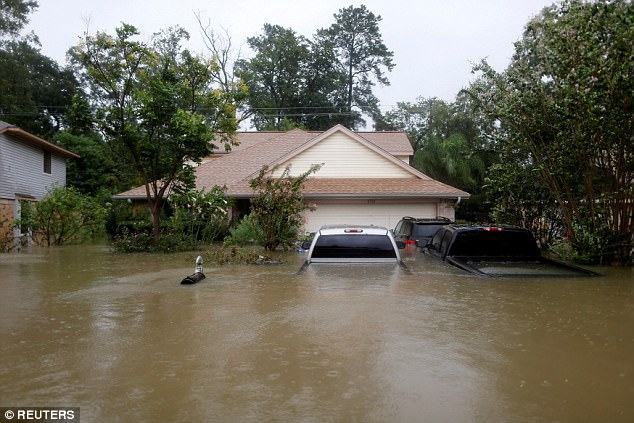 The Cajun Navy, which includes Cain’s group and others organized under similar names, has mobilized volunteers from throughout the region to step into the gap.

The Cajun Navy is a volunteer group of hundreds of boat owners who came together to help out their community during the Louisiana flood in the summer of 2016.

On Sunday, the Houston Police Department made a call for volunteers on Twitter asking people with boats to call a number and help the department out.