Caleb Plant is most definitely back.

One year after suffering his first career defeat to Saul ‘Canelo’ Alvarez, the 30-year-old returned to the ring for Saturday’s WBC super middleweight title eliminator against Anthony Dirrell looking to make a ‘statement,’ which arrived in the ninth round.

‘I was in full control the whole time,’ Plant (22-1) said after dropping the former champion with a left hook. ‘Then boom, baby!”

‘Boom’ might be an understatement. The fight wasn’t exactly uneventful, but nothing over the first eight rounds foreshadowed Plant’s thunderous blow to Dirrell’s forehead in the ninth. 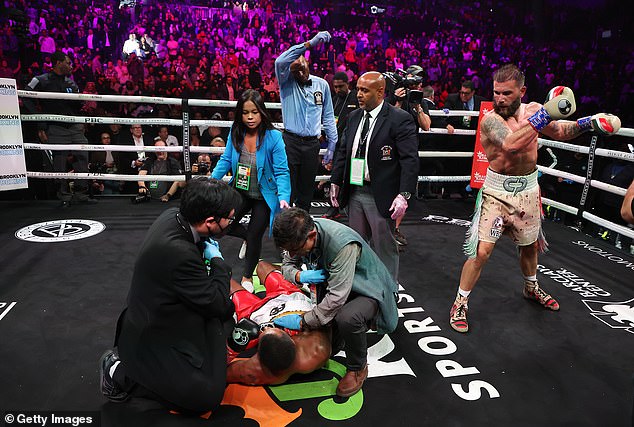 Dirrell (34-3-2) fell backwards to the canvas and briefly laid motionless as referee Harvey Dock signaled the end of the bout.

Plant, meanwhile, could be seen pretending to dig a grave as worried onlookers focused on Dirrell, who would ultimately get to his feet while insisting that he was fine. Afterwards, Plant said he was ‘burying the beef’ between the two after being dismissed as a ‘white boy’ by Dirrell earlier in the week.

The win, as emphatic as it was, may not be enough to generate a lucrative rematch against Alvarez just yet. But Plant did pave the way for potential matchups with the undefeated David Benavidez, or current WBC middleweight champion Jermall Charlo, if he’s willing to move up to super middleweight.

Plant was out-landing Dirrell early, although neither fighter could claim to have any real momentum through the first four rounds. 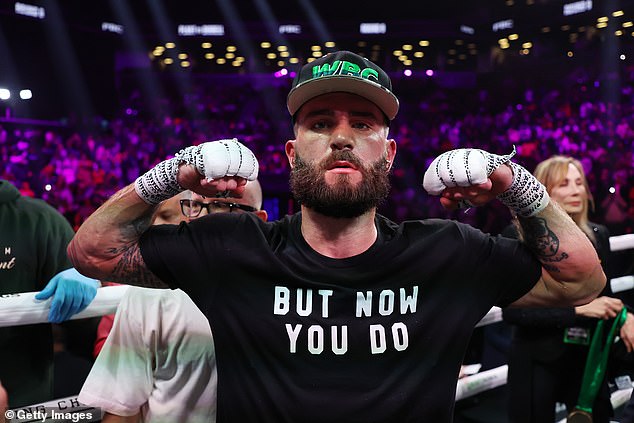 The few pockets of action that did occur came as Dock was intermittently separating the two.

The action picked up in the fifth after Plant landed a big left on Dirrell, sending the 38-year-old stumbling. But Dirrell didn’t back down, instead challenging Plant along the ropes and connecting with a series of combinations.

Plant ended the frame by raising his arms victoriously, as if to prove he was unaffected by the exchange, which appeared to be good enough to give the round to Dirrell.

Dirrell offered some theatrics of his own in the sixth, mocking Plant by pretending to run away from him at the end of the round. Rather than chasing the playful Dirrell, Plant did a small dance on his way back to his corner.

The two tried to get back to fighting in the seventh and eighth rounds, but continued to get tangled, twice resulting in the boxers falling to the canvas. 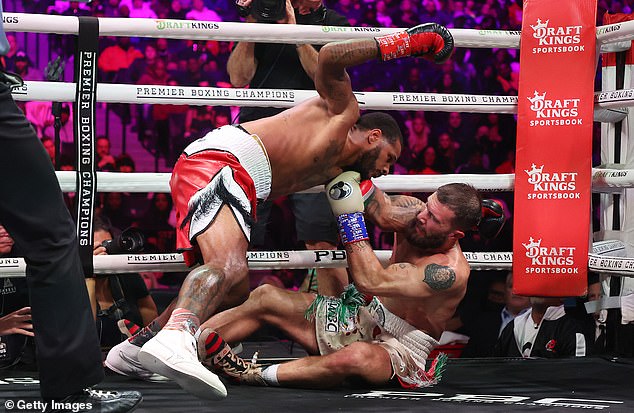 The boxers fell to the canvas several times during the fight, which was close prior to the KO

Dirrell became increasingly frustrated with the entanglements in the ninth round, after landing a solid combination on Plant, only to have to wait for Dock to pry the two apart once again.

Although Plant was dismissive of Dirrell both before and after Saturday’s fight, the win stands as one of his career highlights.

Dirrell’s resume includes a 2016 stoppage win over Caleb Truax, who went the distance with Plant in January of 2021. He also rebounded from his 2015 defeat to Badou Jack with an unanimous-decision victory in Marco Antonio Rubio’s swan song later that year. 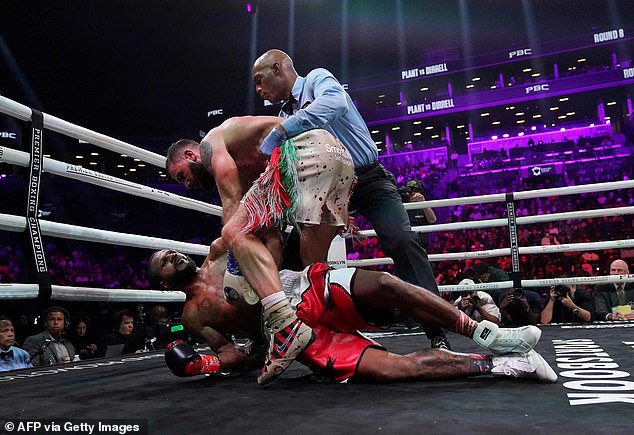 But his ascent through the super middleweight rankings was derailed in 2019 when his corner threw in the towel against Benavidez. His 2021 wasn’t much more impressive, with a split draw against Kyrone Davis and a fourth-round knockout of middling Marcos Hernandez on the Plant-Canelo undercard.

So Plant wasn’t the only former champion fighting to stay in the title picture at 168 pounds on Saturday night in Brooklyn.

At the end of the night, though, it was Plant and not Dirrell who remained in contention for a super middleweight crown.

“This win felt good,’ Plant said. ‘You’ve heard about how much he hates me, but my head and my heart is what won me this fight. I was in control the whole time. My coach told me to stay patient and ease in and that’s what we did. Then, boom!’