A high school basketball team’s student section questioned whether their opponents had ‘passports’ during a game between the two California schools on Tuesday, causing arguments between administrators from both campuses.

Students from Righetti High School launched into the xenophobic chants during the game against private school St. Joseph High School. The two schools are across the street from each other.

As the game comes to a close, students could be heard taunting: ‘Where’s your passport?’

Students from Righetti High school launched into the xenophobic chants during the game against private school St. Joseph High School.

Kind of a disappointing ending to a good game as the visiting student section chanted “where’s your passport?”, apparently at SJHS players. Administrators from both schools exchanged words. There was a charged atmosphere throughout the contest. #santamariatimes pic.twitter.com/xCQU7J5INA

A sports editor with the Santa Maria Times filmed the video and said that ‘administrators from both schools exchanged words.’

‘There was a charged atmosphere throughout the contest,’ the editor added of the game, with St. Joseph dominating Righetti with a score of 74-57.

On their roster, St. Joseph has three players from Puerto Rico – which is a territory of the United States. They also have one student from France.

‘Just because I will not allow certain xenophobic statements to be made at my campus and I don’t want racially-charged rhetoric here doesn’t mean that I don’t love and respect the students of this whole community,’ Dougherty said. ‘Not just the St. Joe students but the whole community. I think they were good kids who didn’t realize what they were saying.’

She later added: ‘I’ve made mistakes and I probably made a mistake charging over there. I don’t want this to be damaging to somebody’s career. We can all do better. Let’s reflect on it, pray on it, and each school needs to focus on what we can do to be the best school for our kids.

‘I am a person who wears her heart on her sleeve. I’m an easy crier. I love hard, I cry hard, I love my kids a lot … All I can say is that I wished that I hadn’t scolded another administrator’s students. Obviously that had upset him, but I was in the mode of taking care of kids.’

However, Dougherty did express concern that chants had been made at other games, including one last month between the two schools. 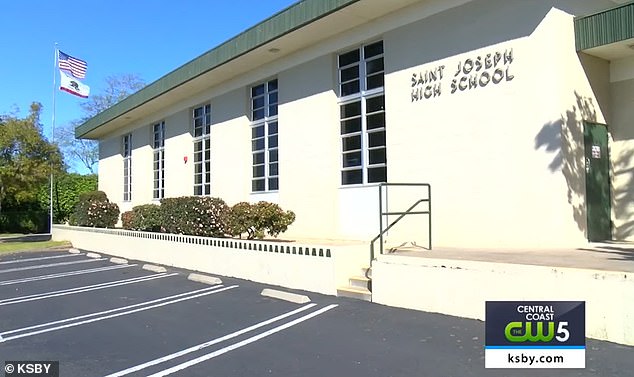 St. Joseph put out its own statement condemning the chants made by the other team 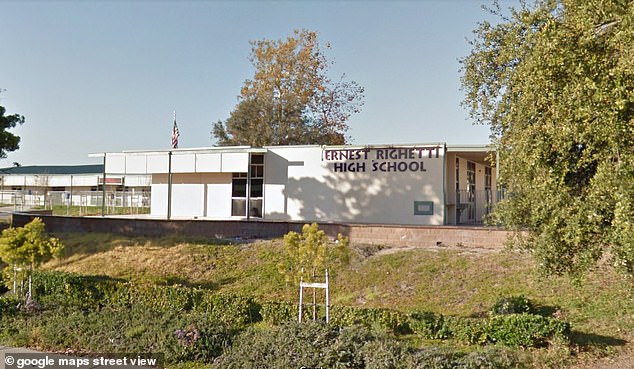 ‘A student had come up to me, one of the players, and he had been upset after the last game,’ Dougherty said. ‘Another student came to me (Tuesday) morning and said he was nervous about it. It had been on my mind, but I had begun to feel smug because things had gone so swimmingly (at Tuesday’s game).’

Tom Mott, coach for St. Joseph, felt that the comments were not racist.

‘I honestly think they were unaware they said a racist thing,’ Mott said. ‘They did not intend for it to be racist.’

‘We are aware of the unacceptable comments exchanged from both sides of the basketball court during the heated rivalry between St. Joseph and Righetti High School Tuesday night,’ he said in the statement to KSBY. ‘The incident is being addressed by SMJUHSD and RHS school officials. We have no further comment at this time.

St. Joseph put out its own statement condemning the chants made by the other team.

‘We are disappointed about the way the boys basketball game against Righetti High School ended on Tuesday night,’ they said in a statement. ‘We do not tolerate any type of inappropriate statements made at any student especially if they could be interpreted as disrespectful. We hope that this can be a lesson in sportsmanship and mutual respect for students from both schools.’