A California sheriff has vented his frustration with the state’s controversial sanctuary laws after a twice-deported criminal carried out a deadly crime spree, which ended with his suicide at the end of a 100mph police chase.

Gustavo Garcia, 36, died in an apparently intentional wrong-way crash in Porterville on Monday, after officials said he shot dead a gas station attendant, wounded two other people, carjacked farmworkers and robbed a convenience store at gunpoint.

The US immigration and Customs Enforcement later released a statement saying that Garcia’s rampage ‘could have been prevented’ if the federal agency had been made aware of his release from jail on Friday, after he was picked up on a minor drug charge. 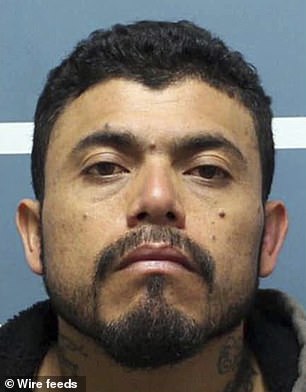 ‘This is an unfortunate and extremely tragic example of how public safety is impacted with laws or policies limiting local law enforcement agencies’ ability to cooperate with ICE,’ the federal agency stated.

On Wednesday, Tulare County Sheriff Mike Boudreaux responded to ICE’s claims, saying that laws had to be changed to reopen channels of communication between local law enforcement and ICE, reported The Fresno Bee.

‘We are very frustrated with the fact that the way the laws are set up currently that law enforcement hands are tied,’ Boudreaux lamented. 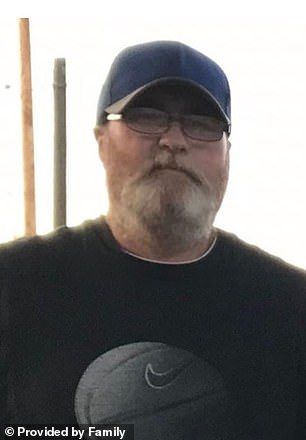 Shortly before 1:30am Monday, Garcia fired shots into a Shell gas station in the Pixley area, then about an hour later, he killed Rocky Paul Jones (pictured), 51, of Visalia outside the Arco AMPM in that city, Visalia Police Chief Jason Salazar said

According to ICE, the federal agency had placed a detainer on Garcia last week after his arrest, but Boudreaux argued that he had no choice but to let the man go without honoring ICE’s detainer.

Under California’s sanctuary laws, an ICE detainer cannot be recognized unless the agency presents a warrant for a suspect’s arrest signed by a federal judge.

Since Garcia had been arrested on a misdemeanor charge of being under the influence of a controlled substance, the sheriff’s office could not keep in in lockup for more than 10.5 hours.

Boudreaux said in the past, before the passage of State Bill 54 in September, he would have turned Garcia to ICE right away.

‘That tool has been removed from our hands and because of that our county was shot up by a violent criminal that could have easily been prevented had we had the opportunity to reach out to our fellow counterparts,’ he added.

Boudreaux pointed out that he personally supports DACA recipients and Dreamers, and has no interest in enforcing immigration laws.

But the sheriff believes the state’s sanctuary laws need to be amended in order to allow his office to better communicate with ICE to more effectively protect his community from violent criminals.

‘Right now they are just releasing people back into the community, like Gustavo Garcia,’ he concluded. 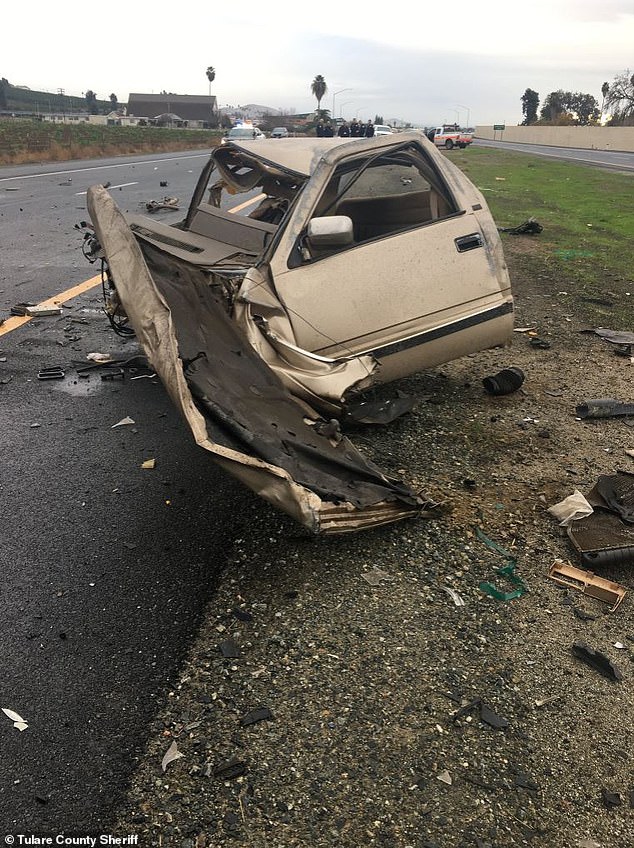 What remains of one of the vehicles involved in the crash on State Route 65 in Porterville, California is seen above on Monday morning

Boudreaux previously said Garcia had been on a ‘personal reign of terror’ since Sunday afternoon, which has left police scratching their heads and struggling to find a motive.

An autopsy would determine whether he had any drugs or alcohol in his system.

Garcia had a long criminal history that included arrests for drugs, assault with a deadly weapon, vandalism and contributing to the delinquency of a minor and he had been in trouble with immigration officials several times and was deported in 2014, Boudreaux said.

However, he did not know Garcia’s recent immigration status.

The rampage began around 1pm Sunday in Exeter when Garcia shot a farmworker who was picking fruit, police said. He was expected to recover.

Surveillance video showed Garcia firing shots at the ceiling and demanding more than $2,000 in cash, the Fresno Bee reported. 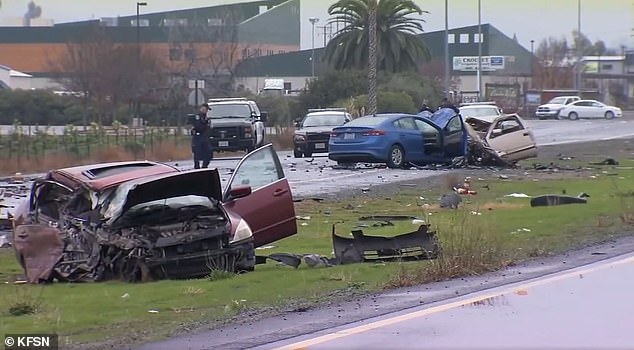 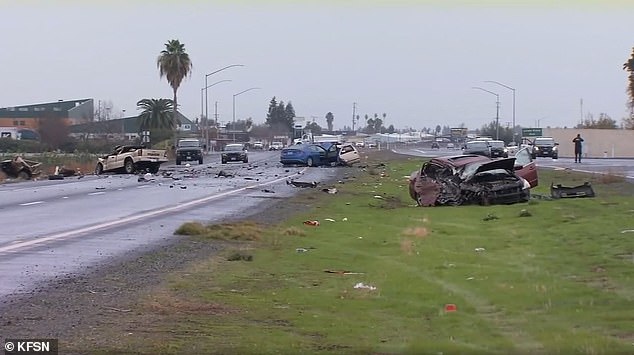 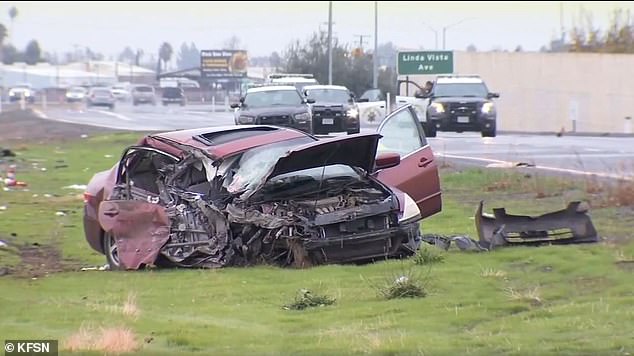 Garcia died after smashing into four cars, leaving one driver in critical condition and the other three with minor injuries

At about 7:30pm Sunday, Garcia shot a Motel 6 guest in the arm and chest in Tulare, although her wounds weren’t life-threatening, authorities said.

‘She had made eye contact with the subject and he had followed her to her parking spot, where he got out of the car and for an unbeknownst reason began firing at her vehicle,’ Tulare interim Police Chief Matt Machado said.

Shortly before 1:30am Monday, Garcia fired shots into a Shell gas station in the Pixley area, then about an hour later, he killed Rocky Paul Jones, 51, of Visalia outside the Arco AMPM in that city, Visalia Police Chief Jason Salazar said.

Jones had exchanged words with Garcia before the shooting but it was unclear whether Jones had any relationship with the killer, police said.

‘It appears his rampage and his acts of violence were random and they were not chosen targets, which makes it even more dangerous,’ Boudreaux said.

‘This person was targeting anyone who got in the way.’

Garcia later went to his ex-girlfriend’s house in Visalia and fired several shots from her backyard but she and her children escaped unharmed, police said.

He then fired shots into a home in the Sultana area, then shortly after 6:30am crashed his car after a two-minute police chase during which he shot and hit pursuing sheriff’s cars and deputies fired back.

Garcia ran into an orchard where he stole a truck at gunpoint from three farmworkers and led authorities in a chase that reached 100 mph on State Route 65, where Garcia drove the wrong way in traffic and seemed intent on trying to hit other cars, California Highway Patrol Lt. Scott Goddard said.

Garcia died after smashing into four cars, leaving one driver in critical condition and the other three with minor injuries, Goddard said.

He ‘had no regard for human life,’ Boudreaux said.