California is paying 200 prison inmates $2 per day and $1 an hour to fight the deadly wildfires that have been raging in the northern part of the state.

Sixteen crews of prison inmates are assisting to help contain the Camp Fire that has destroyed thousands of acres about 90 miles north of Sacramento, according to ABC 10 TV.

They are helping 9,000 other firefighters battle the deadliest and costliest wildfires in the history of the state.

So far, 44 people have died and more than 200 are missing as search teams deploy power saws and cadaver dogs to try to locate more victims.

California’s Volunteer Inmate Firefighters work as a group in West Hills, California to control the Woolsey Fire near Los Angeles on Tuesday 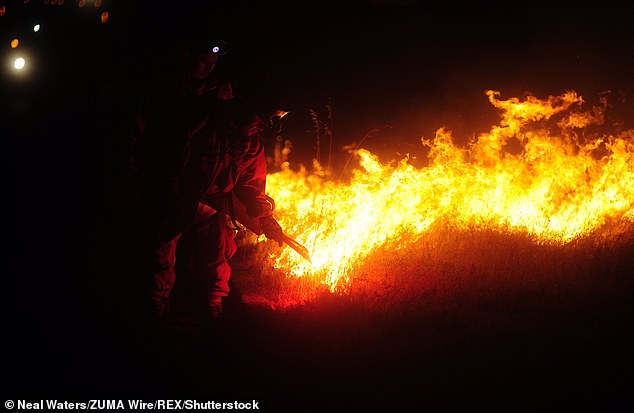 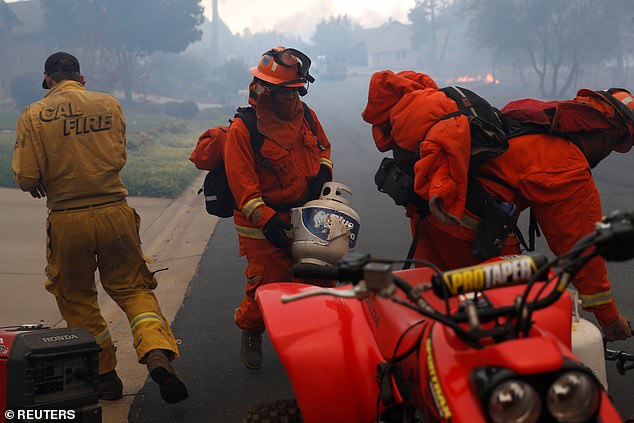 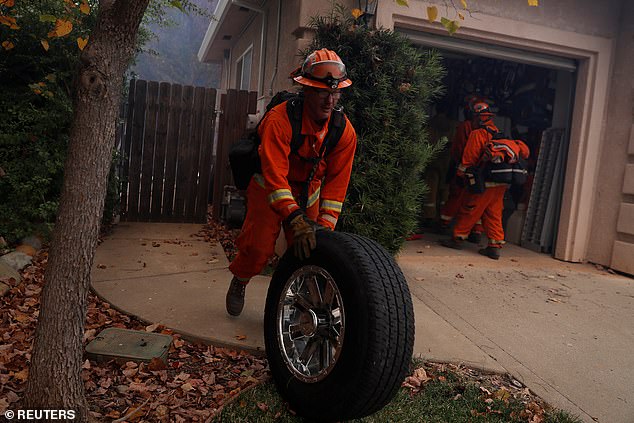 More than 7,000 residential homes have been destroyed as the blaze has decimated some 125,000 acres.

So far, the Camp Fire is just 30 per cent contained.

In Southern California, two people have died and three firefighters have been injured by the Woolsey Fire, which has destroyed 370 homes.

Inmate firefighters, who also receive reduced sentences in exchange for their volunteer work, have often been deployed alongside regular firefighters to combat wildfires that have ravaged California in recent months.

This past summer, the Department of Corrections announced that more than 2,000 inmates and 58 youth offenders were helping firefighters combat wildfires.

Inmates are given training as wildland firefighters. They receive the same level of instruction that full-time CAL FIRE personnel receive.

That includes one week of classroom instruction and a week of field exercises.

After they finish with instruction, they help in cases of wildfires, floods, and search and rescue.

The use of inmates as firefighters is nothing new. More than a century ago, California began putting inmates to work in building highways.

During World War Two, when CAL FIRE was depleted with most men deployed overseas, the Department of Corrections sent inmates to help fight fires.

In total, up to 4,522 adult inmates and 80 juveniles can be housed in camps throughout the state.

State officials say that there are nearly 3,400 inmates currently stationed at fire camps.

Paying the inmate firefighters $1 an hour enables the state to save more than $100million in taxpayer money every year, according to ABC 10 TV.

The program only allows inmates who were convicted of nonviolent crimes to participate. 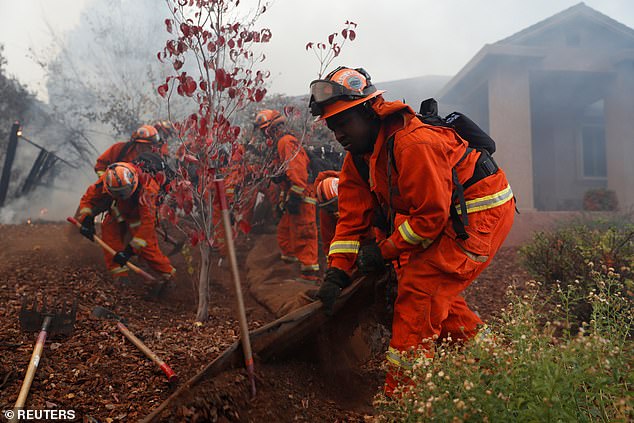 Inmate firefighters (like those seen above in Paradise on Thursday) are helping 9,000 other firefighters battle the deadliest and costliest wildfires in the history of the state 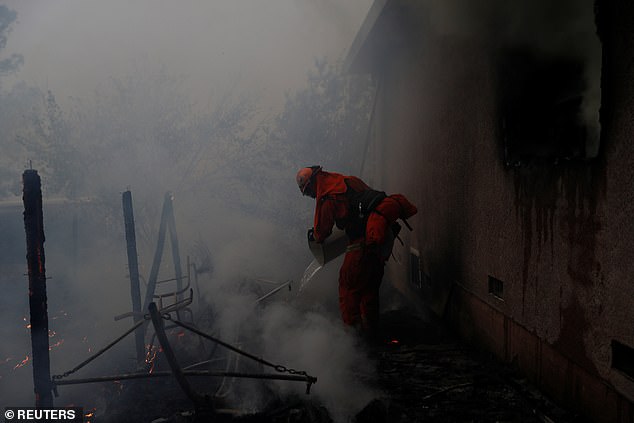 They must also be screened on a case by case basis before they get acceptance.

They must also have demonstrated good behavior in prison. Anyone who has committed arson, rape, or sex offenses are disqualified.

But critics argue that paying inmates $1 an hour to fight fires is tantamount to slave labor, especially when considering that CAL FIRE firefighters earn $10.50 an hour.

‘No matter how you may want to dress it up, if you have people working for nothing or almost nothing, you’ve got slave labor, and it is not acceptable,’ former Richmond Mayor Gayle McLaughlin said.

But the inmates insist they do not feel taken advantage of by working so hard for so little pay, which is actually the highest wage a California prisoner can earn.

The state saves an estimated $124 million a year with this program, which has existed since 1946. Two prisoners died last year while fighting fires.

“It’s hard work, a little bit of money. But it helps build you,” he said.

Rangel was sentenced to eight years in prison after being convicted of robbing a home in his hometown of San Fernando, near Los Angeles.

Being a fireman, said Rangel, who is of Mexican descent, changed his life. He said he had never worked so hard.

‘When I came in, I had no experience at all in anything,’ he said.

‘I enjoyed doing it, enjoyed working, helping others. Hopefully I will pursue my career,’ he added.