The stark warning was issued on Tuesday and comes after nine people were killed and more than 500 hospitalised by conditions thought to be caused by the devices.

Dr Charity Dean, California’s acting public health officer, said: ‘We are seeing something that we have not seen before.

‘There are numerous unknown factors at this time, and due to the uncertainty of the exact cause, it is our recommendation that consumers refrain from vaping until the investigation has concluded.’ 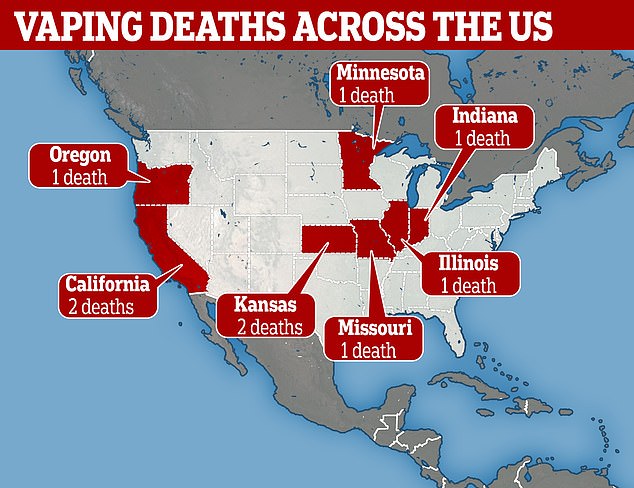 So far, in a month, nine people have been struck down by mysterious illnesses caused by vaping 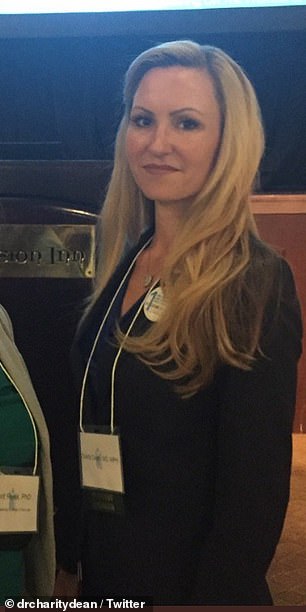 Dr Charity Dean, California ’s acting public health officer, said: ‘We are seeing something that we have not seen before’

It comes after Massachusetts announced a four-month temporary ban on the sale of all e-cigarettes in the state.

The ban is the first of its kind in the nation – as Michigan and New York have targeted their bans to vaping flavours.

But now the Army, Air Force and Navy are set to ban the sale of all e-cigarettes on bases.

The temporary bans put into place by state governments and military branches are intended to stem new illnesses until the CDC, FDA and state health investigators can identify what, exactly, is in e-cigarettes that might be triggering acute lung damage.

E-cigarettes come with a liquid cartridge that typically contains THC or nicotine – or a mix of both. When heated, the substance turns into a vapour that the smoker then inhales.

Experts suspect that vitamin E acetate, an ingredient found in some cannabis vaping products, may play a role in triggering the lung illnesses.

It may act like grease in the lungs, damaging the tiny sacs that fill with air. But it has only been found in some THC vapes that severely ill patients have used.

The Centers for Disease Control (CDC) last week said 530 confirmed and probable cases have been reported in 38 states in the US, up from 380 the week before.

Illnesses are most common among men, who account for 72 per cent of the confirmed cases.

Vaping-related illnesses have affected Americans of all ages, but are more common in younger people who are not usually prone to lung disease.

WHAT IS KILLING VAPERS?

Cases have been reported in the majority of US states – 38, plus one territory.

Vitamin E acetate is suspected as a possible trigger for the disease.

But it’s only been found in THC vapes, which some, but not all, of the severely ill patients used.

This chemical may act like grease in the lungs, damaging the tiny sacs that fill with air.

In most, if not all, of these cases, what begins as shortness of breath and chest pain progresses to coughing, vomiting, fatigue, diarrhea, fever and weightloss.

Patients with the most severe cases wind up in the hospital with severely damaged lungs that often appear to be infected with pneumonia.

Sometimes they have to be placed on ventilators or in medically-induced comas.

The illness can rapidly progress, developing into what is called acute respiratory distress syndrome (ARDS).

ARDS is a life-threatening condition which means the lungs can’t provide the body’s vital organs with enough oxygen.

Illnesses are most common among men, who account for 72 percent of the confirmed cases.

Vaping-related illnesses have affected Americans of all ages, but are more common in younger people who are not usually prone to lung disease.

Young adults between 18 and 34 account for a worrying 67 percent of cases and 16 percent of the vaping illness victims are under 18.

Young adults between 18 and 34 account for a worrying 67 per cent of cases and 16 per cent of the vaping illness victims are under 18.

In most, if not, all, of these cases, what begins as shortness of breath and chest pain progresses to coughing, vomiting, fatigue, diarrhea, fever and weight loss.

Patients with the most severe cases wind up in the hospital with severely damaged lungs that often appear to be infected with pneumonia.

Sometimes they have to be placed on ventilators, in medically-induced comas, or worse.

CDC officials said many but not all of the reported and confirmed cases involved both THC – the psychoactive chemical in marijuana – and nicotine vaping.

Michigan and New York have placed bans on flavored e-cigarettes to discourage young people from using the devices.

The share of high school students using e-cigarettes has more than doubled over the past two years, with 27 percent reporting they had used an e-cigarette in the past month, according to preliminary federal data released last week.

Public Health England told MailOnline the deaths in America should not deter Britons from using the products in the UK.

Martin Dockrell, tobacco control lead at PHE, said: ‘A full investigation is not yet available but indications are that the US cases have been linked to people using illicit vaping fluid bought on the streets or home-made, some containing cannabis products like THC oil or synthetic cannabinoids like spice, and others Vitamin E acetate oil.

‘This is not the same as using UK regulated nicotine products. Unlike the US, all nicotine containing e-cigarette products in the UK are tightly regulated for quality and safety by the Medicines and Healthcare products Regulatory Agency and they operate the Yellow Card Scheme, encouraging vapers to report any adverse effects.

‘Public Health England’s advice remains that vaping carries a small fraction of the risk of smoking.

‘Using a nicotine-containing e-cigarette makes it much more likely someone will quit successfully than relying on willpower alone – three studies this year have found them twice as effective as NRT alone.

‘But it’s important to use UK-regulated e-liquids and never risk vaping home-made or illicit e-liquids or adding substances.’

REVEALED: THE TIMELINE OF THE NINE VAPING DEATHS IN THE US

An Illinois man said to be using e-cigarettes to smoke THC died on August 24 after his lungs failed when he developed a mystery lung illness.

The second person to die after vaping was a ‘middle-aged’ Oregon resident.

They were said to have recently started using an e-cigarette containing cannabis oil from a legal dispensary and passed away sometime at the end of August.

A third victim in Indiana passed away from the mysterious lung disease in August.

The patient was described only as ‘elderly’ and little else is known about them.

The fourth victim, a 65-year-old man, died sometime in August but his death wasn’t confirmed until September 6.

Minnesota officials said the patient had been using the electronic devices to smoke THC.

A 55-year-old man from Los Angeles was the fifth person to lose his life after smoking the e-cigarettes. He died on September 7.

A woman in her fifties was the sixth person to succumb to vaping-related illnesses.

The Kansas-born woman, who had a history of health problems, passed away on September 12.

A California man became the seventh person to pass away after using the devices. The 40-year-old from Tulare County died on September 17.

The Missouri man in his forties became the eighth victim to die from vaping.

He had normal lung function until he started using the devices in May.

The victim began experiencing trouble breathing which gradually got worse before he was taken to hospital in St Louis on August 22. He passed away on September 19.

A man in his fifties became the second Kansas resident to die to the vaping-related illness.

He was said to be a regular vaper who had ‘underlying health issues’. He passed on September 24.