A 65-year-old man infected with coronavirus was flown by private jet and wheeled into the arrival terminal at Los Angeles International Airport in a negative pressure isolation chamber on Thursday.

Helicopter video captured by KABC-TV shows personnel in biohazard protective gear taking the patient, a resident of Orange County, to a hospital after a privately run air ambulance flew him to LAX from Aruba on Thursday.

The patient was then rushed to St. Joseph’s Hospital in Orange County. Officials did not say what condition the man was in.

A hospital spokesperson told KABC-TV that the hospital was not prohibited from ‘confirming or denying the presence of any patient who may or may not be on campus.’

The patient’s wife told KABC-TV that she believes her husband contracted the virus while touring in Egypt.

The wife has also tested positive for coronavirus. She is currently in self-isolation.

A 65-year-old man arrives at hospital in Orange County, California, on Thursday 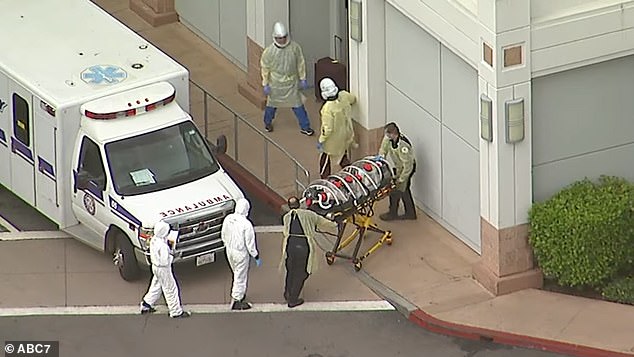 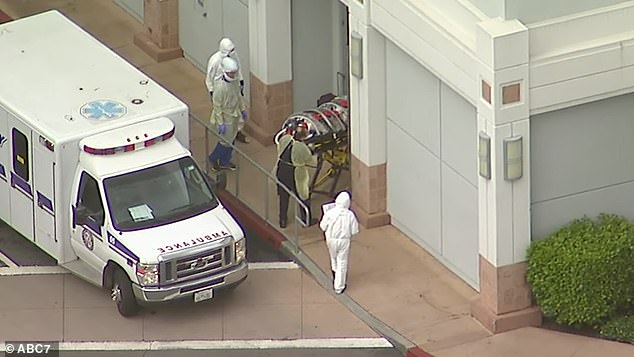 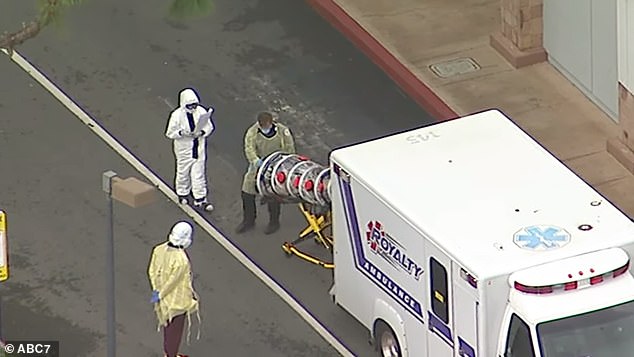 The man’s wife, who is in self-isolation after also contracting the coronavirus, believes they caught 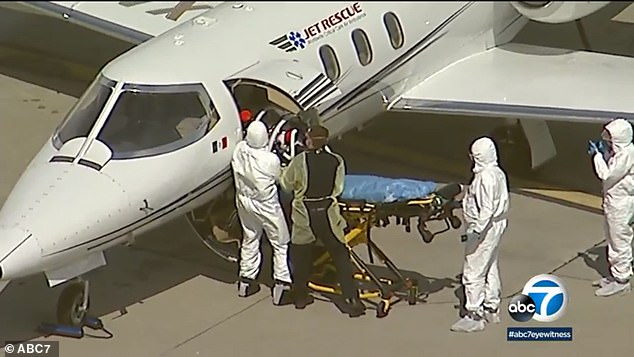 Egypt on Wednesday reported 14 new coronavirus cases, the health ministry said, bringing the total number of confirmed cases up to 210.

The country has so far reported six coronavirus related deaths, though critics say the real number is likely much higher.

California, the most populous state in the United States, has also been among the hardest hit by the coronavirus outbreak, with 958 confirmed cases as of Thursday afternoon.

At least 19 fatalities have been reported in California.

Earlier on Thursday, it was learned that a 34-year-old California man died days after testing positive for COVID-19, marking one of the youngest known fatalities for the deadly strain gripping the nation.

Jeffrey Ghazarian, of Glendora, passed away on Thursday morning at a hospital in Pasadena, where he’d been hooked up for a ventilator and fighting for his life for the past five days.

While the coronavirus fatality rate is relatively low among most people Ghazarian’s age, he appeared to have been at higher risk because of his history of asthma and bronchitis as a child, and the fact that he beat testicular cancer back in 2016.

Ghazarian’s family said he had recently taken a trip to Orlando for a conference on March 2 and stayed a few extra days to visit Walt Disney World and Universal Studios with friends. 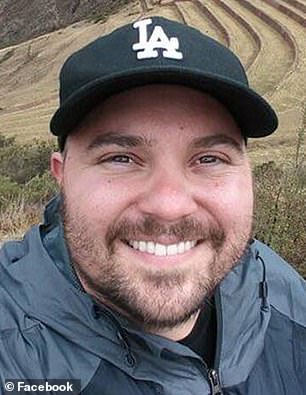 Disney finally shuttered its flagship Florida theme park resort on Sunday night as coronavirus fears have prompted millions across the country to avoid large crowds where the infection can spread rapidly.

The company came under fire for holding a ‘farewell celebration’ in the hours before it closed – with Abigail Disney, the granddaughter of Walt Disney Co’s co-founder Roy Disney, among the critics slamming the event as reckless and irresponsible.

Photos taken on Monday show the park – the most-visited in the world – eerily deserted.

Relatives told TMZ Ghazarian developed a cough on March 7, which escalated to the point that he was coughing up blood hours later.

He flew back to Los Angeles on March 9 and immediately when to the ER, where he was found to also be suffering from a high fever.

Ghazarian was tested for COVID-19 after a chest X-ray confirmed that he had contracted pneumonia – as many other coronavirus patients have.

Doctors prescribed him fluids and antibiotics and sent him home to self-quarantine until the results came back positive on March 13.

He was again sent back home, this time armed with a portable oxygen meter. 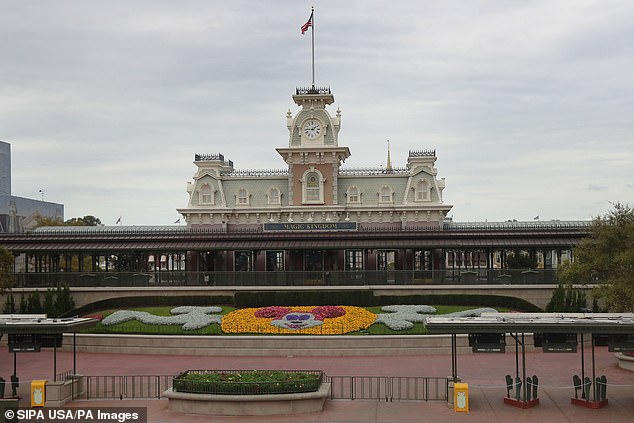 Ghazarian’s family said he had recently taken a trip to Orlando for a conference on March 2 and stayed a few extra days to visit Walt Disney World (pictured) and Universal Studios theme parks. The entrance to Disney’s Magic Kingdom is seen empty on Monday, hours after it was finally shuttered due to coronavirus fears 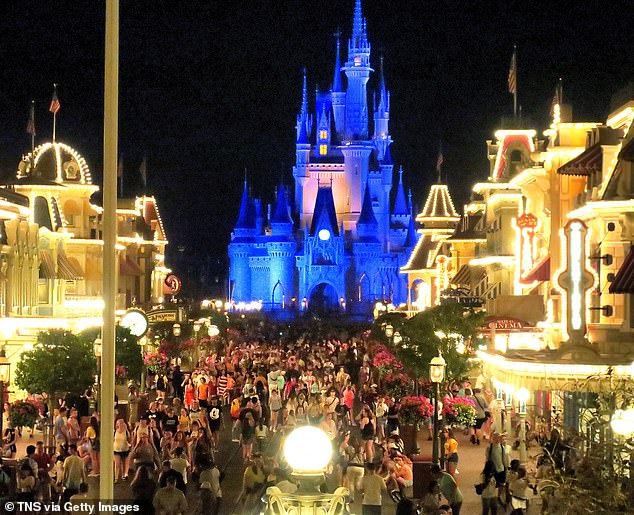 His oxygen levels plummeted hours later before he was transported by ambulance to the hospital, where it was discovered his lungs were 60 to 70 percent blocked by the pneumonia.

Doctors then placed Ghazarian in a medically-induced coma and put him on a ventilator to give his lungs time to heal.

His family claims he was approved for anti-viral medication but he didn’t get it in time and his condition took a sharp turn for the worst this morning.

‘He suffered a lot and put up a good fight,’ Ghazarian’s sister told TMZ.

‘We will miss our Jeff everyday but we are thankful for all the fun happy memories of the times we had together.’ 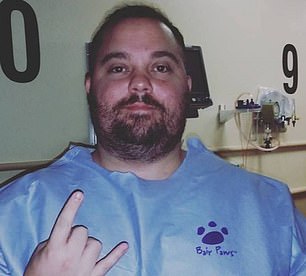 Ghazarian appeared to be at higher risk of coronavirus complications because of his history of asthma and bronchitis as a child, and the fact that he beat testicular cancer back in 2016. He is seen undergoing cancer treatments in the Facebook photo above

In the early stages of the outbreak, the CDC held that most younger American adults were not likely to become seriously ill from COVID-19.

But a new report released Wednesday found that the risk was much higher than previously thought.

Although those who are oldest, aged 80 and above, have the greatest risk of dying, a sizeable portion of those hospitalized were younger, according to the Centers for Disease Control and Prevention (CDC).

Among 508 patients known to have been hospitalized between February 12 and March 16, 38 percent were between ages 20 and 54.

And roughly 47 percent of 121 patients taken to intensive care units were under age age 65, the CDC found.

But older people were far more likely to die from the disease once in hospital – with almost three quarters of deaths occurring in those aged over 65.

‘I think everyone should be paying attention to this,’ Dr Stephen Morse, a professor of epidemiology at Columbia University’s Mailman School of Public Health, who was not involved in the report, told The New York Times.

‘It’s not just going to be the elderly. There will be people age 20 and up. They do have to be careful, even if they think that they’re young and healthy.’

Nine deaths among adults age 20 to 64 and none were reported in those aged 19 or younger.

President Donald Trump’s messaging has shifted in recent days, from comparing the virus to the seasonal flu to telling young people that they’re not ‘invincible.’ 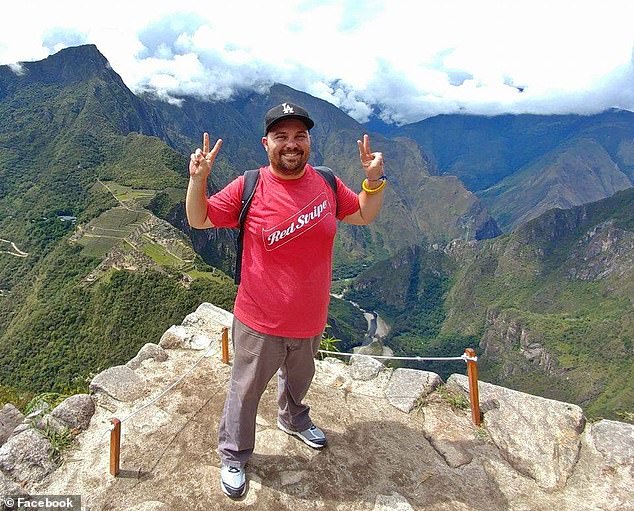 Ghazarian’s sister told TMZ: ‘He suffered a lot and put up a good fight. We will miss our Jeff everyday but we are thankful for all the fun happy memories of the times we had together’ 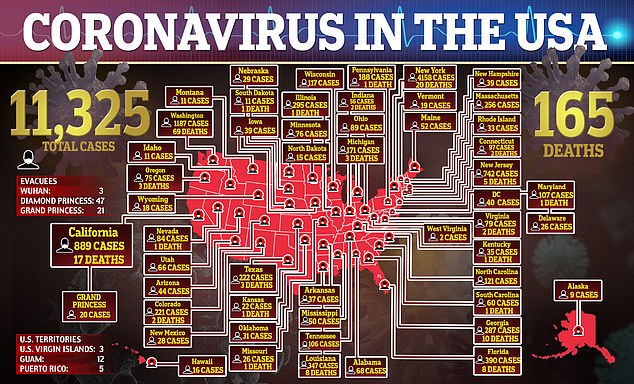 The number of confirmed coronavirus cases in the US climbed to 11,325 on Thursday, including 165 deaths 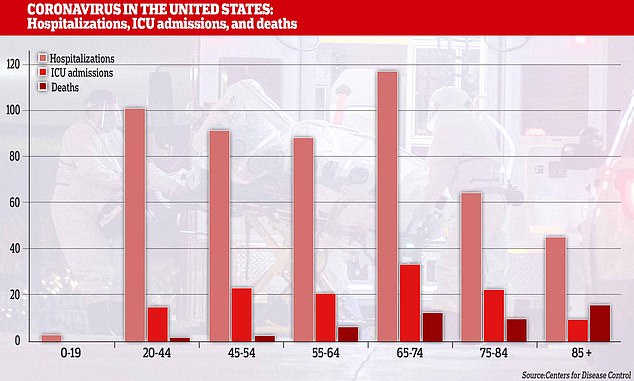 A new CDC report found that between February 12 and March 16, 38 percent of people hospitalized with coronavirus in the US were between ages 20 and 54. The graph above shows the risk of being hospitalized (light red bar), ending up in intensive care (mid-red bar) and dying from the virus (dark red bar) by age

‘We don’t want [young people] gathering, and I see they do gather, including on beaches, including in restaurants,’ he said during Wednesday’s White House briefing.

‘They’re feeling invincible…but they don’t realize that they can be carrying lots of bad things home to grandmother and grandfather and even their parents. So we want them to heed the advice. We mean the advice. And I think it’s getting through.’

At the same briefing, Dr Deborah Birx, a member of the White House coronavirus task force, said she is worried about young people becoming seriously ill.

‘There are concerning reports coming out of France and Italy about some young people getting seriously ill in ICUs,’ she said.

‘We think part of this is people heeded the early data coming out of China and coming out of South Korea that the elderly or those with preexisting medical conditions were at particular risk.

‘It may have been that the millennial generation, our largest generation, our future generation that will carry us through for the next multiple decades, there may be disproportional infections among that group.’