A 41-year-old man succumbed to his wounds a week after being shot eight times when checking up on an neighbor’s house following a burglary attempt at a nearby home.

Patrick Smith, a married father of a five-year-old boy from Barstow, California, died on the evening of Thanksgiving, according to the Daily Press of Victorville.

On November 14, a burglary call came into police at a nearby residence. During the incident, Patrick Smith was asked by an elderly neighbor to check on her property after she heard noises outside, according to police.

‘Patrick and I waited out front of our home for a while until we thought everything was clear. An elderly neighbor that lives next door asked me if Patrick could come and check her house because she was scared to go back in,’ wrote Elizabeth Smith, Patrick’s wife, on his GoFundMe page.

‘Patrick being a gentleman went and checked her home which was clear but once he entered the backyard the suspect shot Patrick 8 times.’

Smith was on one side of her home when the fleeing suspect, identified by Barstow police as 18-year-old Leslie Hawkins, is thought to have confronted him.

Officers arrived on the scene after the shots were fired where they found four teen suspects in the vicinity, one with stolen property on his person, and the wounded Smith.

Police also found a gun that they say matched the caliber of bullets fired at the shooting scene.

The victim was airlifted to Arrowhead Regional Medical Center where he was in critical condition, the Daily Press reported. 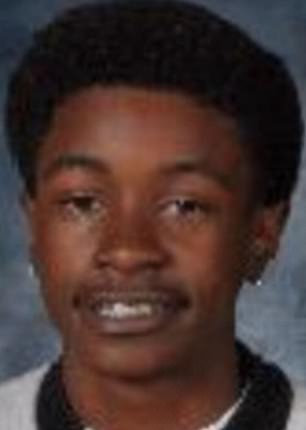 Leslie Hawkins, 18, seen on his wanted poster, is sought by Barstow Police as the suspect in the shooting of Patrick Smith on November 14

‘His first surgery went well, they got him stable through blood transfusions, removing 3 ft of intestines, and repairing his colon. In his second surgery they removed his appendix, stitched his face and tongue, and were finally able to get him off breathing ventilators.

Initially it appeared that he might survive his ordeal, but on Thursday night, Patrick Smith expired.

‘He was making a miraculous recovery and was surprising doctors and staff every day with his progress,’ Elizabeth posted. ‘On Thanksgiving Day, surrounded by family, his health took a turn for the worst.’

‘My husband succumbed to his injuries early afternoon Thanksgiving Day,’ Elizabeth wrote in the latest update. ‘His heart and body could not longer take the stress.’

The GoFundMe campaign has since switched to collecting funds for outstanding medical and funeral expenses, the total as of Sunday was up to nearly $38,000. 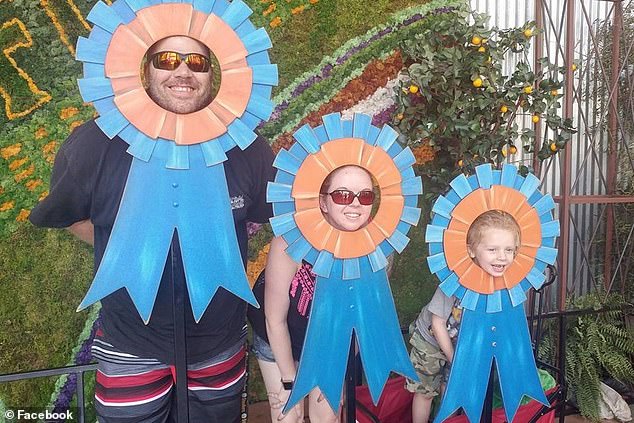 The GoFundMe campaign was initially set up to aid in the 41-year-old father’s recovery, but unfortunately will have to go towards outstanding medical bills and funeral expenses

Elizabeth, for her part, is not surprised at the outpouring of generosity.

‘He’s best friends with everyone he knows,’ his wife told the Daily Press. ‘He draws people in. He doesn’t care if you’re a janitor, like him, or whatever you are. I’m always like, ‘how are you so amazing all the time?’

The four black teens arrested during the break-in were booked into the San Bernardino County High Desert Juvenile Detention Center on a burglary charge.

Barstow police are still searching for the suspect, Leslie Hawkins, who they say can be seen fleeing the area of the shooting on a surveillance video. 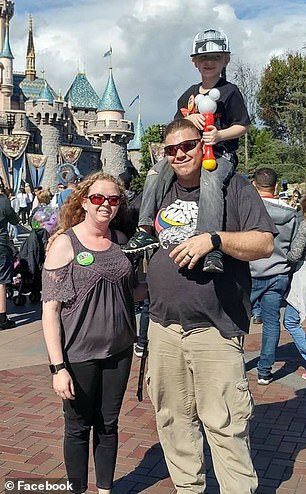 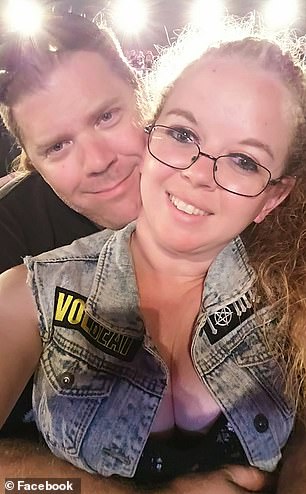 Anyone with information regarding the investigation or Leslie Hawkins can contact Detective Thomas Lewis at (760) 255-5187.