The murder of Newman Police Corporal Ronil Singh, 33, by suspect Gustavo Perez Arriaga (above), who is an illegal immigrant, has sparked debate over California’s sanctuary laws

The sudden and tragic murder of California policeman Corporal Ronil Singh has reignited a fierce debate over sanctuary laws in the state.

Newman police officer Singh, 33, was shot dead on Wednesday morning, just after Christmas, by suspect Gustavo Perez Arriaga after he was pulled over on suspicion of driving under the influence.

After a massive two-day manhunt led by multiple local law enforcement agencies, Arriaga, a 32-year-old illegal immigrant from Mexico, was finally arrested on Friday in Bakersfield, California, and is being held without bail.

He was caught as he was trying to flee back to his native country.

Stanislaus County Sheriff Adam Christianson led the investigation and blamed California’s sanctuary law for preventing local authorities from reporting Arriaga to immigration officials in the past.

Arriaga had two previous drunken driving arrests, but was never reported to ICE as a result of California’s sanctuary law, which limits cooperation between local authorities and U.S. immigration officials.

The law includes more than 800 exceptions for violent crimes and felonies and bars police from asking people about their citizenship status. 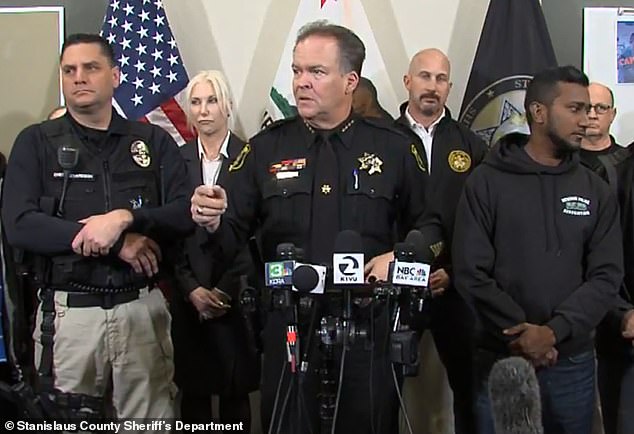 Christianson identified Arriaga on Friday afternoon at a press conference saying he illegally entered the U.S. via Arizona several years ago and had two previous DUI arrests. He said if California’s sanctuary laws didn’t exist, Singh’s murder would have never happened 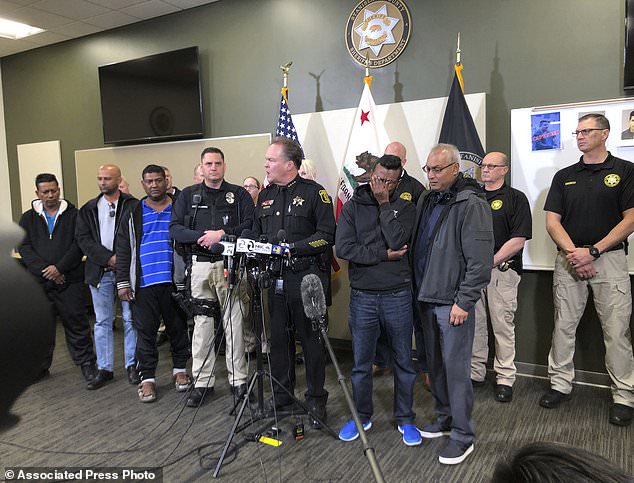 ‘We can’t ignore the fact that this could have been preventable,’ Christianson said during a press conference on Friday after Arriaga’s arrest 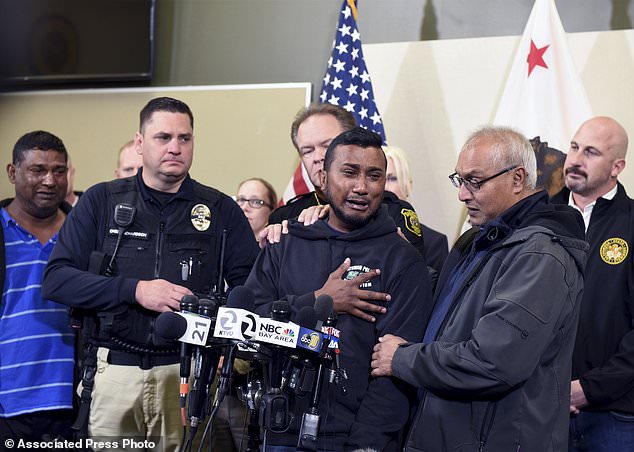 ‘We can’t ignore the fact that this could have been preventable,’ Christianson said during a press conference on Friday after Arriaga’s arrest.

He also asked why the state was ‘providing sanctuary for criminals (and) gang members. It’s a conversation we need to have.’

‘This is a criminal illegal alien with prior criminal activity that should have been reported to ICE. Law enforcement was prohibited because of sanctuary laws and that led to the encounter with officer Singh,’ Christianson said.

‘I’m suggesting that the outcome could have been different if law enforcement wasn’t restricted, prohibited or had their hand ties due to political interference,’ he added.

The devastating shooting has intensified the political fight over immigration.

President Donald Trump took to Twitter after the tragic murder to rally once again for a wall to be built at the U.S.-Mexico border.

‘There is right now a full scale manhunt going on in California for an illegal immigrant accused of shooting and killing a police officer during a traffic stop. Time to get tough on Border Security. Build the Wall!’ he tweeted.

Trump saw the government descend into a partial shutdown just before Christmas after refusing to sign off on a financial budget that didn’t allocate a whopping $5billion to building the border wall. 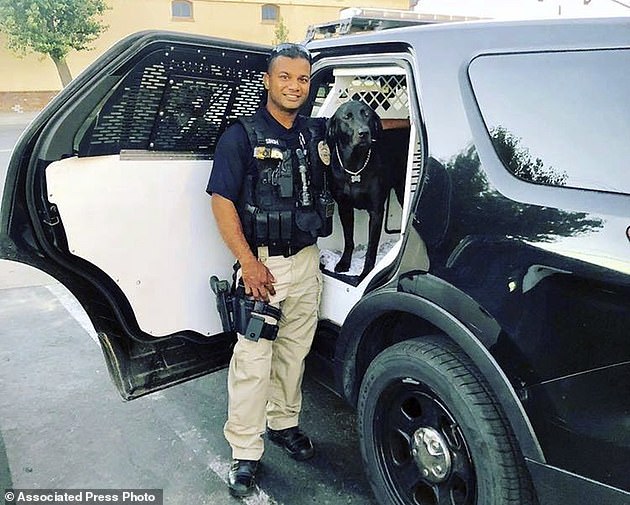 Ronil Singh, 33, of Newman Police Department was killed just past 1am on Wednesday December 26 after he pulled over suspect Arriaga’s car on suspicion that he was drunk driving. When he approached the car he was shot multiple times and killed 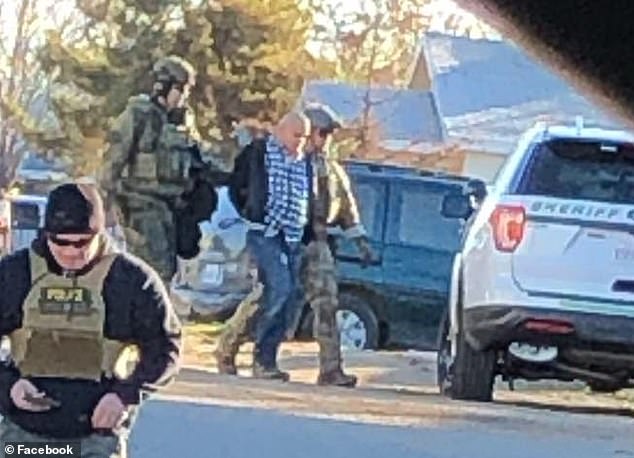 Arriaga, an illegal immigrant from Mexico, was arrested Friday morning in Bakersfield, California suspected of killing Singh just after Christmas. He is pictured above being taken in

Christianson said that Arriaga had entered the U.S. by crossing the border in Arizona several years ago and held a variety of farm larborer jobs.

He was affiliated with the Mexican-American street gang Sureños and had two previous DUI arrests.

He also had multiple Facebook pages under different aliases.

California Governor Jerry Brown has said the law strikes a balance between protecting families and ensuring consequences for serious criminals. His spokesman said Friday that if the suspect was a known gang member, police could have informed federal authorities.

‘The type of tone and attitude that Sheriff Christianson has taken instills fear and panic in all immigrant communities’ that could make people afraid to report crimes, de Leon told KNX-AM radio in Los Angeles. 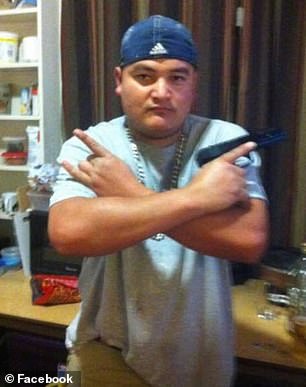 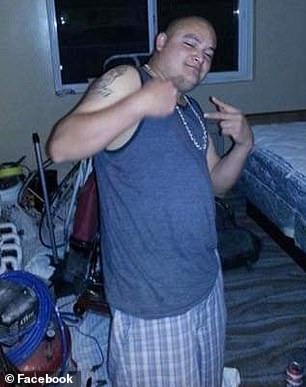 The suspect (pictured left and right) has a flaming skull tattoo on his right arm with the phrase ‘$ur3no$’ which means Sureños, the name of a Mexican-American street gang linked to murders and human smuggling along the U.S.-Mexico border 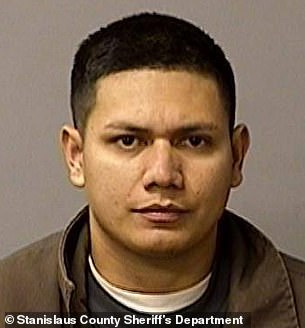 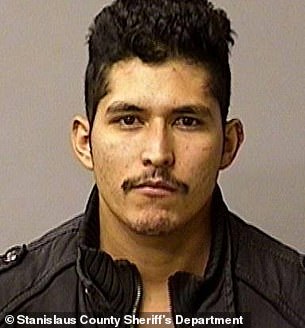 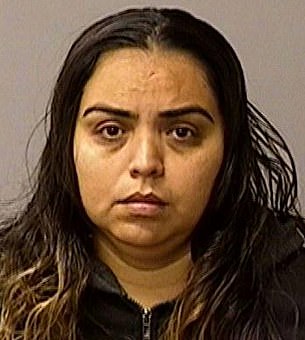 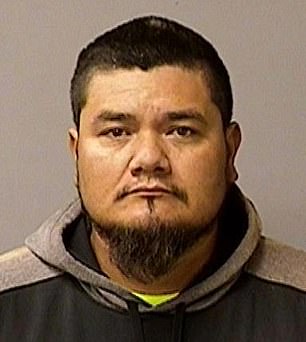 Seven other people have also been arrested for helping Arriaga evade police capture.

All are accused of helping Perez Arriaga, who’s expected to be arraigned on charges Wednesday, authorities said.

Singh, 33, was also an immigrant, who came legally from his native Fiji to fulfill his dream of becoming an officer, authorities said.

He lived in Modesto, Northern California with his wife Anamika and their five-month old son. He had been with the Newman police force for seven years, joining it in 2011. 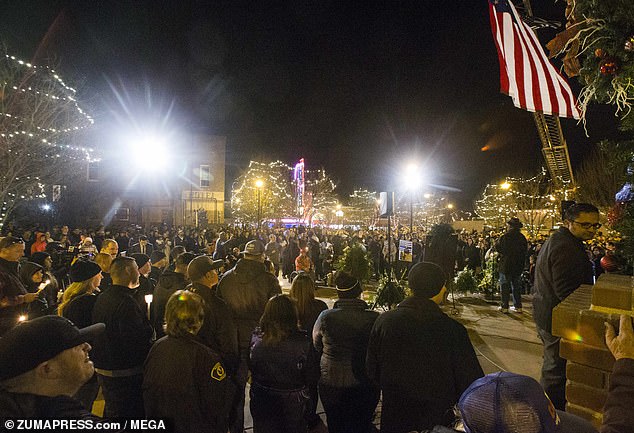 The townspeople honored the memory of the seven-year police veteran. He was from Fiji and joined the Newman Police force in 2011 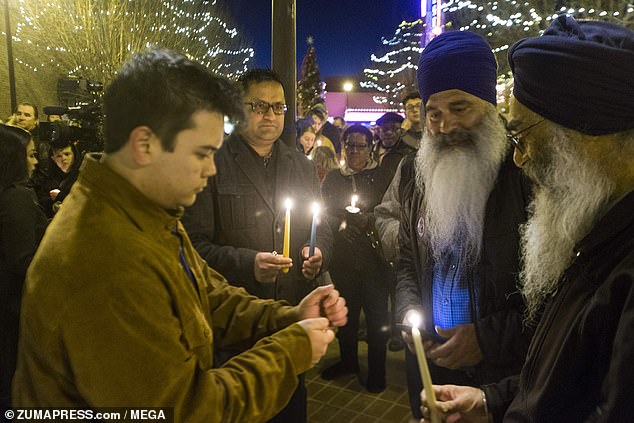 Hundreds of residents, friends, relatives and fellow officers attended the candlelight memorial, where many cried and some spoke emotionally about the officer.

Singh’s wife, son, and K-9 partner led the vigil that saw the community gather at the Newman Downtown Plaza and place white and blue flowers and ribbons around the police station.