A management professor has revealed exactly how frustrated workers can get ahead in their careers – and it doesn’t involve more meetings or longer hours.

Professor Morten T Hansen, former professor at Harvard Business School and current professor of University of California, Berkeley, claims the secret to success is to work ‘smarter’ rather than ‘harder’.

Professor Hansen outlines his ideas in a new book, Great at Work, which is published in the UK tomorrow. Based on a huge research project that started in 2011, the title p oints to seven key steps to ‘smarter’ working that can be applied to anyone, in any position, across any industry.

One particularly striking example involves outlining the elements of a well run meeting which takes place not in a Silicon Valley start-up or Wall Street firm but at Slough-based Reckitt Benckiser, a company that sold dishwater powder.

Professor Morten T Hansen, management professor of University of California, Berkeley, claims the secret to success is to work ‘smarter’ rather than ‘harder’. Stock image

Do less, then obsess

In their quest to further their careers, workers often feel they should ‘increase the scope of our activities, pursuing multiple responsibilities and options,’ writes Professor Hansen. ‘We believe that by taking on more tasks, we accomplish more and improve our performance. “Doing more”… is usually a flawed strategy.’

‘Instead people should look to pick a few priorities and then obsess over your chosen area of focus to excel… Many people prioritize a few items at work, but they don’t obsess—they simply do less.’

In our quantitative study of 5,000 people, we found that employees who chose a few key priorities and channeled tremendous effort into doing exceptional work in those areas greatly outperformed those who pursued a wider range of priorities. 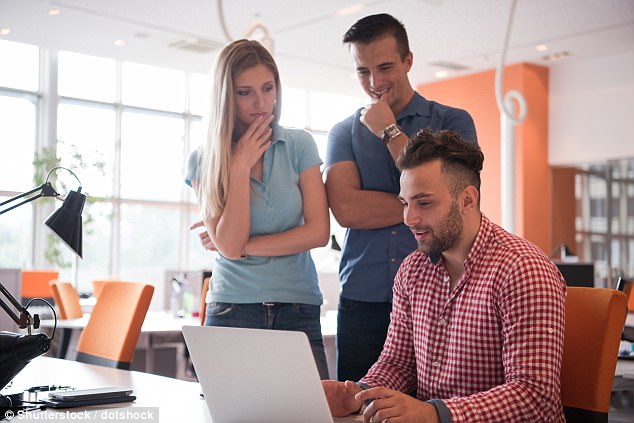 Collaborating has its benefits but there can be a danger of doing it too much. Stock image

A ‘redesign’ means finding a new approach to completing the same task. One way to do this is by re-examining the number of hours worked in a week.

As Professor Hansen explains: ‘Working longer hours enhances performance, but only to a point. If you work between 30 and 50 hours per week, adding more hours on the job lifts your performance.

‘But once you’re working between 50 and 65 hours per week, the benefit of adding additional hours drops off. And if you’re working 65 hours or more, overall performance declines as you pile on the hours…

‘If you’re already working 50 hours per week, resist the temptation to invest more hours at work. Instead, ask yourself: “Can I work smarter, rather than more?”‘

Is there a solution to the trade-off between ‘following’ or ‘ignoring’ passion? Yes. Our research uncovered a third option: ‘matching.’

Some people pursue passion in navigating their careers, but they also manage to connect this passion with a clear sense of purpose on the job—they contribute, serve others, make a difference. They have matched passion with purpose.

What’s the real magic of P-squared? It provides people with more energy that they channel into their work. Not more hours as in the ‘work harder’ paradigm, but more energy per hour of work. That’s working smart.

Professor Hansen criticised the idea, popularised by Malcom Gladwell, that it takes 10,000 hours of practise to master a skill.

He explained: ‘One year of practice repeated in the same way for ten years doesn’t make perfect. Rather, a certain kind of practice makes perfect… Deliberate practice requires that a manager or employee receives helpful feedback every day, yet most people only receive it during their annual review.

‘Imagine the tennis great Roger Federer getting feedback on his serve once a year from his coach. “Hi, Roger, I have been observing your serve for a year now, and I think you should serve a tad more to the left next year.” Absurd. Still, that’s what we do at work.’

While most workers do not have the luxury of time afforded to athletes or performers in rehearsal, they can still apply the same principle of incremental review and improvement by implementing an on-the-go learning loop.

When it comes time to gaining support for projects and goals, it is not enough just to use logic and data and expect others will see the benefits.

Instead the best advocates, whom Professor Hansen calls forceful champions – effectively pursued their goals at work by mastering two skills to gain the support of other people. They inspired others by evoking emotions, and they circumvented resistance by deploying ‘smart grit’ – or the determination to succeed in the face of setbacks.

Don’t be afraid to fight

Much of a team’s work occurs in group meetings. It follows, then, that a team’s performance and your own individual performance hinge on the quality of team meetings. 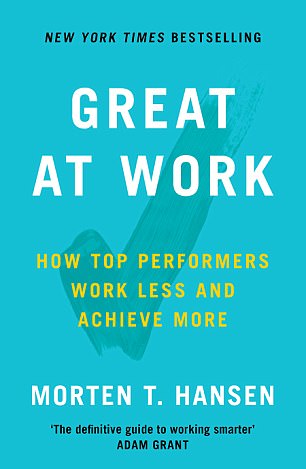 Professor Hansen outlines his ideas in his latest book, Great at Work, pictured

But we don’t need teams to conduct a vast number of meetings to get their work done. Rather we need smarter team meetings where people debate rigorously and commit to decisions. This involves going against the instinct to agree and instead attend a meeting ready to debate. Professor Hansen outlines these tips:

Remember to collaborate… But don’t do it too much

Collaborating – connecting with people in other groups, obtaining and providing information, and participating in joint projects – certainly has its benefits but many workplaces can be in danger over over-collaborating, Professor Hansen argues.

He explains: ‘Disciplined collaboration, as I call it, is a set of practices that allows you first to assess when to collaborate (and when not to) and to implement the effort so that people are both willing and able to commit to it and deliver results.’

Great at Work: How Top Performers Do Less, Work Better and Achieve More by Morten T Hansen is published by Simon & Schuster tomorrow at £14.99