A California state judge is poised to declare coffee cancerous in the coming months.

A law passed in the state in 1986 requires business and public places to post warning signs if anything on the premises is found to be potentially harmful.

Research findings on coffee range from fully in favor of its preventative effects to utterly opposed to it.

The lawsuit over the beverage has similarly split Californians, some of whom say the warning is part of the state’s health-conscious transparency, while others say the signs and labels are so ubiquitous that they have lost their meaning.

Starbucks in Los Angeles already post warnings about carcinogens. Soon, all coffee may have to carry the same notice of risks in the state

California passed proposition 65, the Safe Drinking water and Toxic Enforcement Act, in 1986 after forceful campaigning by citizens, including Jane Fonda.

Under the measure, the state has to publish and update (at least once a year) a list of chemicals that have been found to cause cancer, birth defects or to harm reproductive health.

In the last 30 years, that list has grown to a whopping 900 chemicals, including acrylamide.

Acrylamide is a byproduct of some foods when they are cooked by methods that require very high temperatures, such as frying, roasting or baking, according to the US Food and Drug Administration.

The chemical also forms when coffee beans are roasted, leading the American Cancer Society to advise people to reduce their intakes of coffee, as well as grains and potato products.

Acrylamide contributed to the World Health Organization’s (WHO) classification of coffee as a carcinogen more than 25 years ago.

In 2016, however, the international agency eased up its warnings against the drink, instead advising that all ‘very hot’ drinks are carcinogenic.

Now, a court rather than a health organization is set to determine coffee’s risks.

‘The fact that a court is trying to establish causality between coffee and a disease is a tough thing to do,’ says Dr Robert Shmerling, who has reviewed literature about coffee in his writing for Harvard University.

He says that some studies that have found cancer risks to coffee are later discredited.

‘If you look at enough possibilities, you might find one even if there’s not truth to it because of the way that statistics are set up…to find an 95 percent chance that something won’t happen by chance,’ Dr Shmerling says.

In some studies on cancer and coffee ‘this is that five percent,’ chance of coincidence, he says. 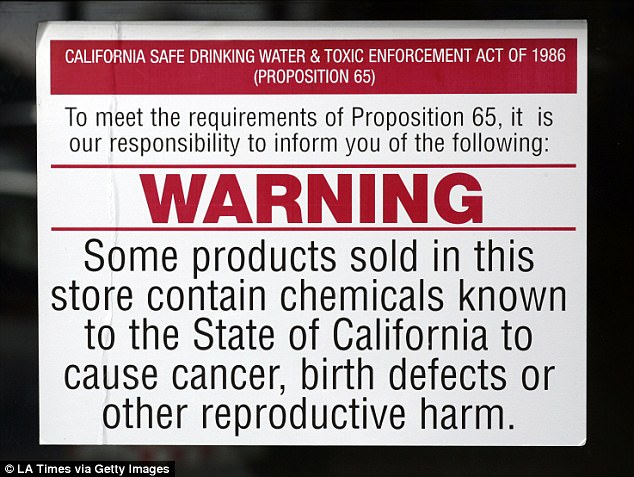 Under Proposition 65, businesses have to post warnings against their entire stores if they carry any products that have been linked to cancer 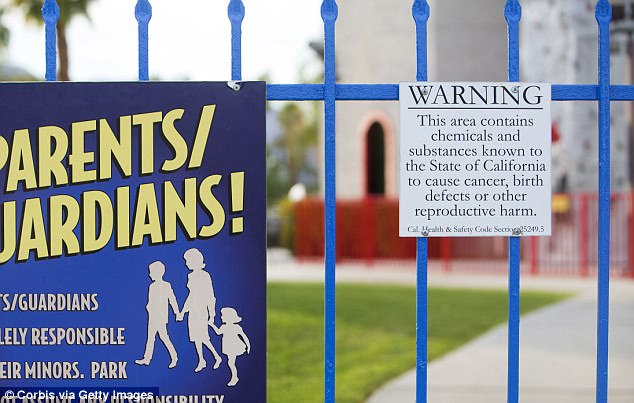 Even some playground are known carcinogens in California, where areas that may contain any one of 900 chemicals must post warnings

But that hasn’t stopped the Council for Education and Research on Toxins (CERT) from bringing its case against dozens of coffee companies, including Starbucks and Keurig, neither of which replied to requests for comment.

The group is represented by Long Beach attorney Raphael Metzger and gained national attention in 2011 for suing McDonald’s and Burger King over claims that their French fries have dangerous levels of the same chemical, acrylamide.

Acylamide turns into a compound that can damage and cause mutations in DNA, raising risks for cancers in animal studies, according to the National Cancer Institute.

However, ‘a large number of epidemiological studies…in humans have found no consistent evidence that dietary acrylamide exposure is associated with any type of cancer,’ the institute’s site says.

That hasn’t stopped warnings to become nearly ubiquitous in California, to the chagrin of some residents, like Twitter user Jake NotTapper, who said ‘everything is known to the State of CA to cause cancer: mattresses, coffee, chemo and other cancer drugs (yes, really).’

New standards for Proposition 65 warnings will come into effect in August and will require companies to attach labels specific to their particular products and whatever substance in them is linked to  cancer.

Coffee may be included, depending on the outcome of the current lawsuit, but everything from parking garages to raw wood will now have to come with explanation of their carcinogens.

It is unclear how effective these warnings are at communicating risks, let alone changing behavior.

In 2014, scientists at Carnegie Mellon University and Harvard University conducted a broad review of research on the effectiveness of disclosures on psychology, and concluded flatly that ‘disclosure requirements appear to have been less effective in changing recipient behavior than their proponents seem to assume.’