A pregnant woman who nearly went into premature labor while caught in the Paradise, California wildfire has named her daughter after the paramedic who got her to safety.

Mickey Huber,a paramedic with 20 years on the job, was helping people evacuate from the terrifying wildfire that tore through Northern California on November 8 when he heard over the scanner that a pregnant woman was going into premature labor.

Anastasia Skinner’s baby wasn’t due for another month, but she began to feel contractions as she grabbed her mother’s two dogs and raced to escape the fast-moving blaze.

Thanks to Huber’s quick thinking, the 25-year-old mother got out alive and was able to carry her baby, Zoele (rhymes with Noel) Mickey Skinner, to term, giving birth to her fourth child just over one month later.

Anastasia Skinner, 25, who nearly went into premature labor while caught in the Paradise, California wildfire has named her daughter after Mickey Huber, the paramedic who saved her. Huber is shown holding Zoele (rhymes with Noel) Mickey Skinner on December 14 at Enloe Medical Center in Chico, California

The flames had already hit Skinner’s car by the time she fought the panic-driven traffic jam out of Paradise on that deadly day.

When she reached a gas station, she began honking the horn and screaming for help.

‘I knew I wasn’t going to make it,’ Skinner said during a phone interview on Friday.

‘I called my husband and told him goodbye, tell all the kids I love them and make sure they remember me.’

A motorcyclist who saw Skinner in distress flagged a police officer who helped her move to the back seat of her Honda Pilot.

Several women who were stuck in the traffic jam brought her blankets and pillows.

A retired fire chief came to her aid and someone requested a helicopter to airlift her to the hospital.

Huber, the assistant chief of operations for Butte County Emergency Services, was only two miles away but he had to make it through 30 minutes of gridlock to get to Skinner. 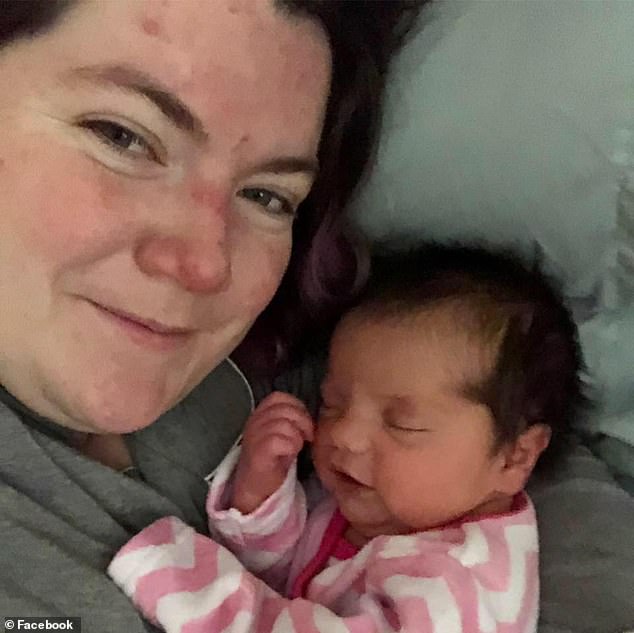 When he arrived and evaluated her condition, he knew she couldn’t wait much longer for a helicopter.

‘The smoke was thick, and the winds were blowing,’ Huber said. ‘The helicopters were having a hard time fighting the fire let alone airlifting patients.’

Because Skinner was having a high-risk pregnancy after suffering two miscarriages and other complications related to an inherited disorder, Huber said she may not have made it if she went into full-blown labor, then and there.

Knowing the gravity of the situation, he arranged a caravan that included three police vehicles to rush Skinner to an ambulance.

Then he jumped in the back with her, where he kept her calm until she reached a hospital where her labor was stopped.

‘He was sweet. He told me, “I’m a guy. I don’t know what this feels like for you, but I’ll try to help you get you through it,”‘ Skinner said. ‘Then he would yell at people outside of the car, waving his hat and telling them to get out of the way.’

‘My goal was to keep her breathing and get her down the hill,’ Huber said. ‘Two of my ambulance crews were trapped by the fire moments before I got to Anastasia so there was a lot of doubt, a lot of worry.’

Skinner said a doctor later told her that smoke inhalation had put her body under stress and triggered the contractions.

After getting Skinner to the ambulance, Huber helped with the mass evacuation until the next day. He said he was shocked and honored when he learned the baby was named after him.

‘That day was full of a thousand different emotions but that is the strongest memory of the day for me,’ Huber said.

More than 50,000 people in Paradise and the neighboring communities of Magalia and Concow were forced to quickly flee the towering, wind-driven flames that burned an area about the size of Chicago — 240 square miles (622 square kilometers) — and became the deadliest US wildfire in at least a century.

Skinner and her husband, Daniel, lost their home, and her mother lost hers too.

But on December 12, more than a month after the fire began, Skinner gave birth via C-section to a full-term, healthy girl and named her after the man she believes saved her life, making Huber’s first name her daughter’s middle name.

‘She’s a blessing in every way including what happened at the Camp Fire,’ Skinner said about her newborn.

Skinner and her husband, Daniel, have three other children, ages eight, six and four.

‘All of our history and what we were as a family, everybody knowing your name and all the things about being in a small town are just gone,’ Skinner said.

When her children get sad about the things they lost in the fire, she said she reminds them to count their blessings, including the baby sister who made it alive.

‘All of us, including our animals are out. Everybody we know is safe,’ Skinner said. ‘We can replace all the stuff in our house, but we can’t replace each other.’ 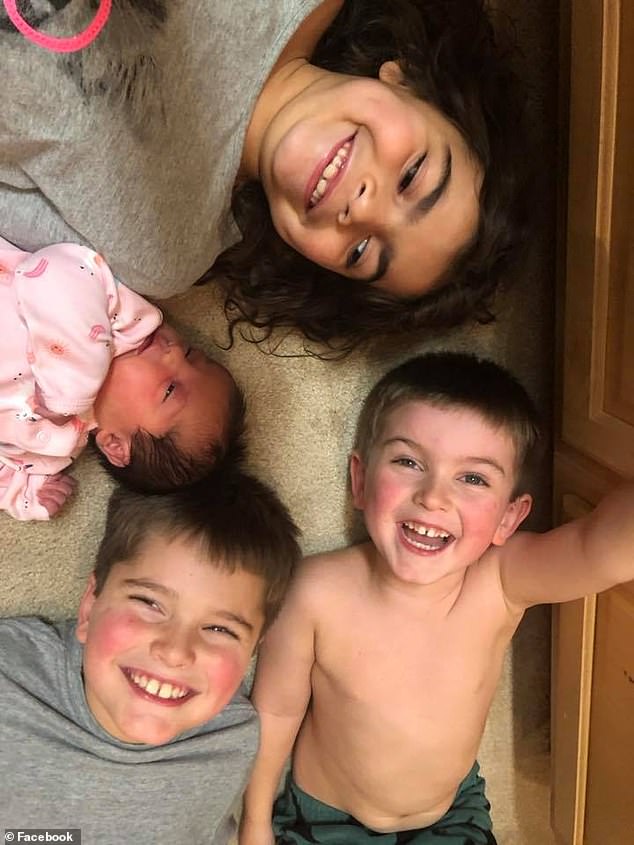 Skinner and her husband, Daniel, have three other children, ages eight, six and four. All four of their children are pictured here