California woman turns closet into a room for her baby

A woman transformed her closet into a stunning tiny bedroom for her baby after moving from a huge apartment into a small cottage.

Whitney Leigh Morris moved across the country into a small house in Venice, California, which she calls the Tiny Canal Cottage. With minimal space to work with, the 36-year-old had to get creative to make the most of the place.

She was particularly inventive when it came to making a place for her one-year-old baby to sleep, turning a bedroom closet in into an adorable nursery.

Cottage: A woman living in a huge apartment in Charlotte, North Carolina, moved cross-country to Venice, California and settled into a tiny 362-square-foot house 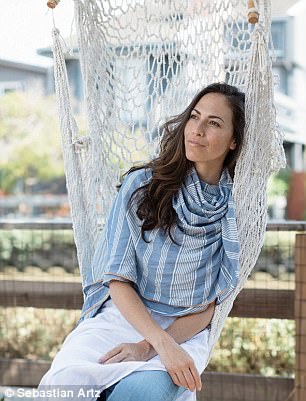 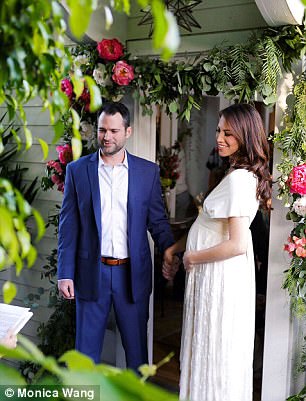 New life: Whitney Leigh Morris and her husband, Adam Winkleman, 40, now have just three rooms: a bedroom, a bathroom, and a ‘living-kitchen-office-play room’ 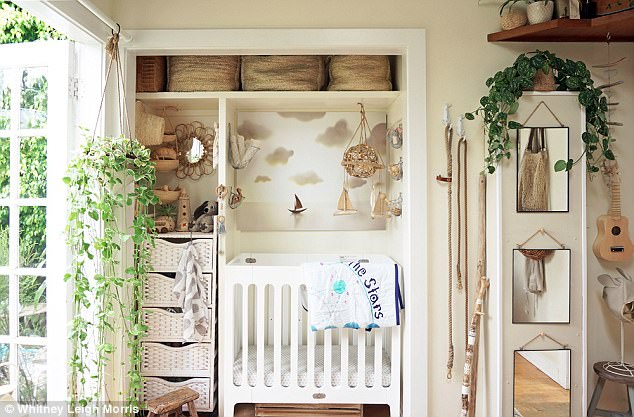 Baby: They had a baby boy, West, but due to not enough room, they transformed the one standard closet in their bedroom into a gorgeous nursery for the now one-year-old

Whitney, a creative director for her own firm, WLM Creative Co, was living in a studio alone when she met her now-husband Adam Winkleman, 40. The couple dated for seven months and then decided to buy a small cottage by a Venice Beach canal, she shared with Cosmopolitan.

In that space, the couple only has three rooms: their bedroom (with one standard closet), a bathroom, and a room that they call the ‘living-kitchen-office-play room.’

Due to the fact that there was only one bedroom and the couple had a baby boy named West, they had to convert the one closet in their home into a place for him to sleep.

The two parents like the arrangement, because they get to wake up every morning and see their adorable son. 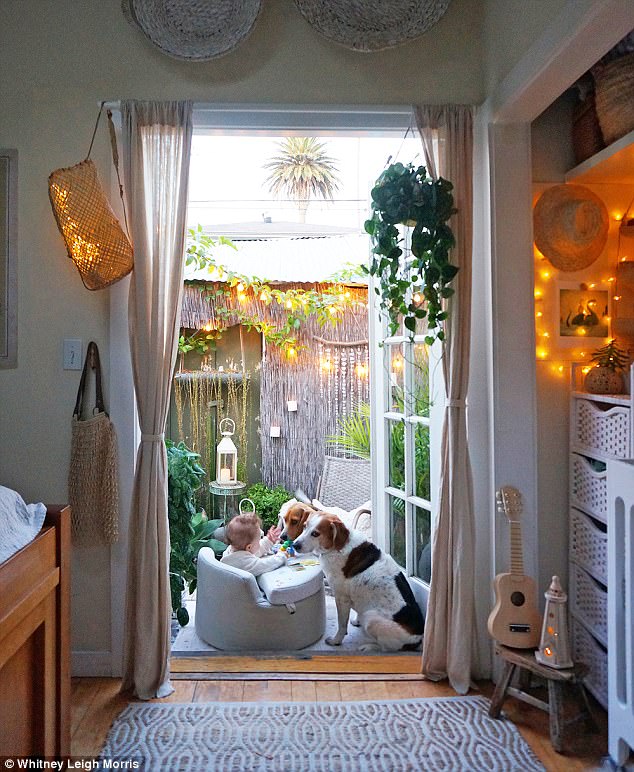 Family: The Tiny Canal Cottage is small, but the couple makes space for everything they need, including their two dogs 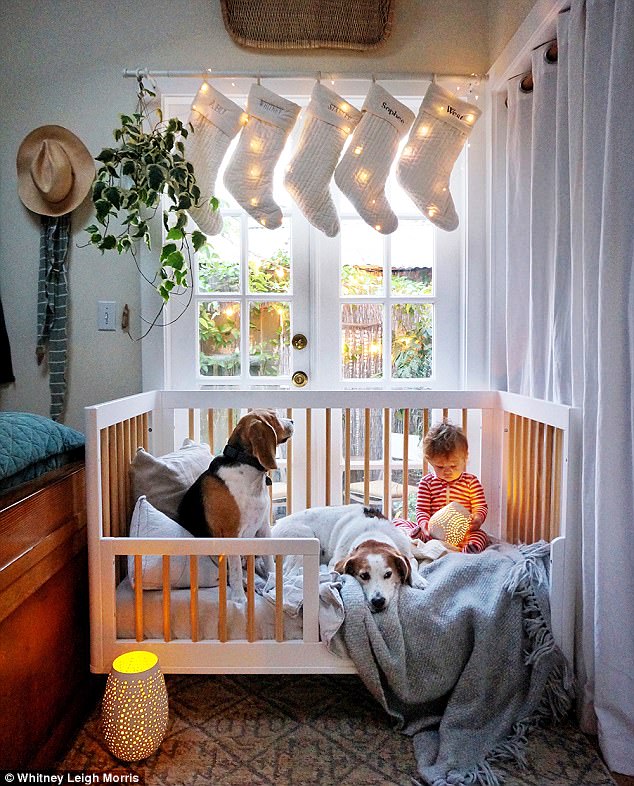 West: Surprisingly, with such a small space to work with, the couple has made the home so cozy and their son West, (pictured) has more than enough room 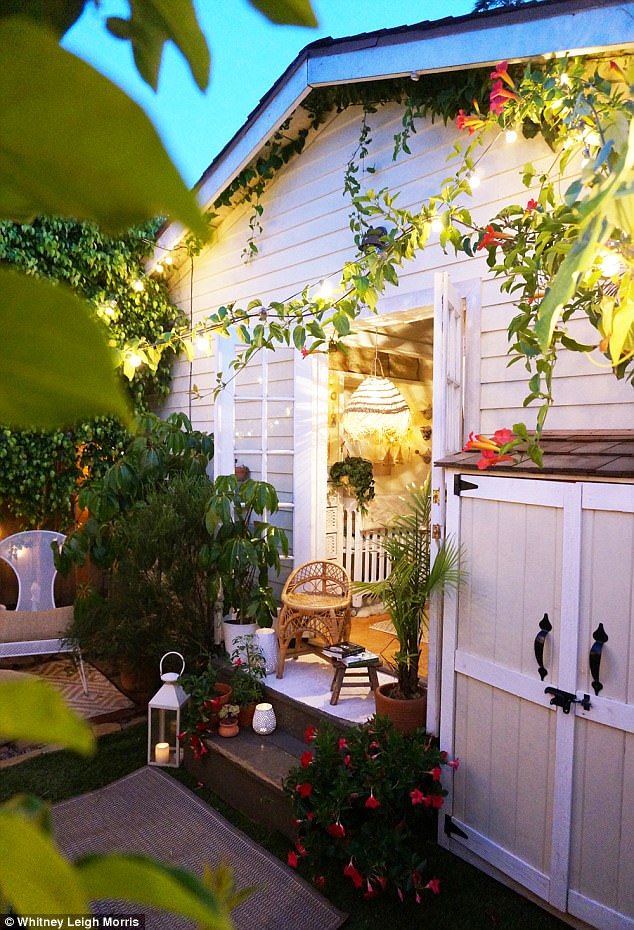 Closet: The couple needed a place for their wardrobes, so they built a shed in the backyard 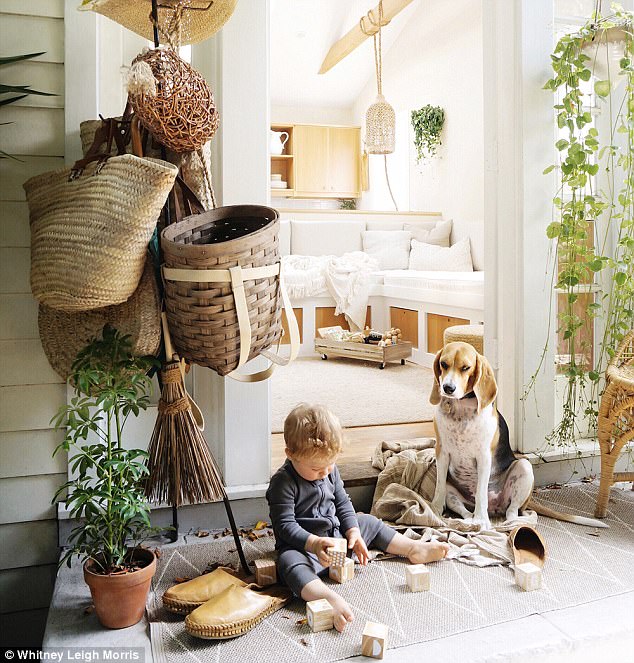 Spacious: Everything in the house has its own place and despite not having a lot of indoor space, the couple makes do with all the outdoor space 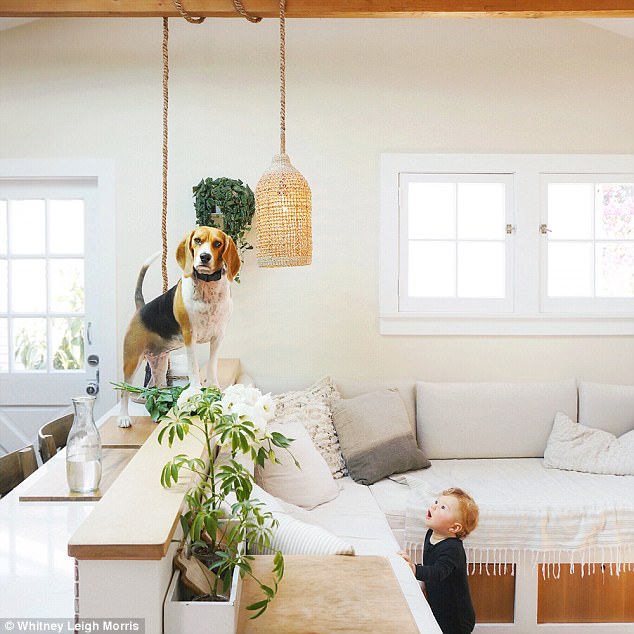 Spacious: Between keeping the walls white, adding a lot of windows, and having high ceilings, the couple makes the house look much bigger than it actually is

The closet — the only one in their bedroom — was not a walk-in, and had just enough space to fit the essentials.

Inside the closet-turned-nursery, which is only a 21-inch-by-five-foot nook, the couple added just the basics: a crib, changing station, vertical storage, accessories, and artwork.

Whitney explained to Cosmo what they had to do with West’s new room, ‘His whole wardrobe, with the exception of a couple of bigger pieces — one big sleep sack and one coat — fits in one drawer.

‘Since he was born, up through about nine months, it worked to just have these little bodysuits. That’s what he’s in 99 per cent of the time — a cotton one-piece,’ she said. ‘They fold up so small that they all fit in that single drawer in his closet-wardrobe-bedroom. We have another drawer for him that is just empty right now.’ 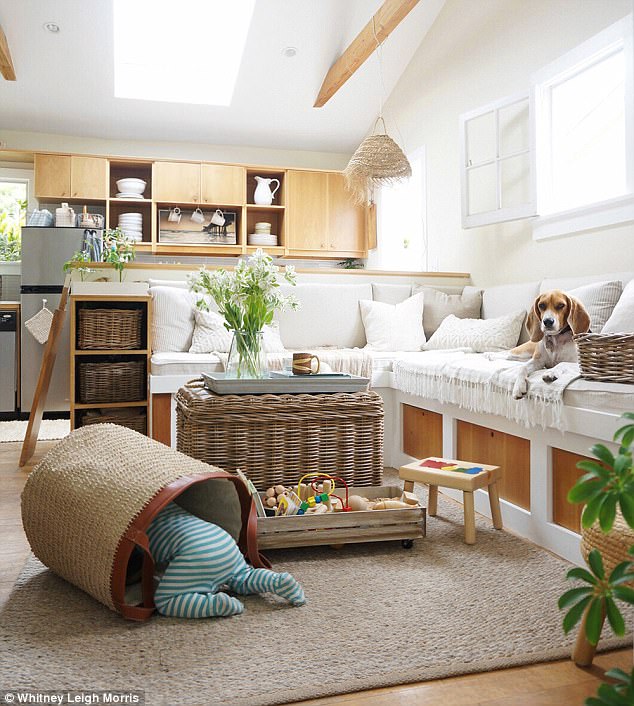 Play room: The living room also acts as a kitchen for the family and a play room for little West 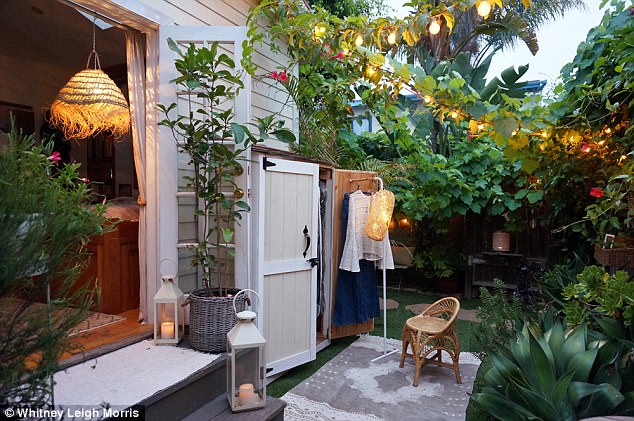 Stunning: The barn doors pictured left, lead to the couple’s wardrobes which is located right outside their bedroom door. When it rains, they simply lock the doors 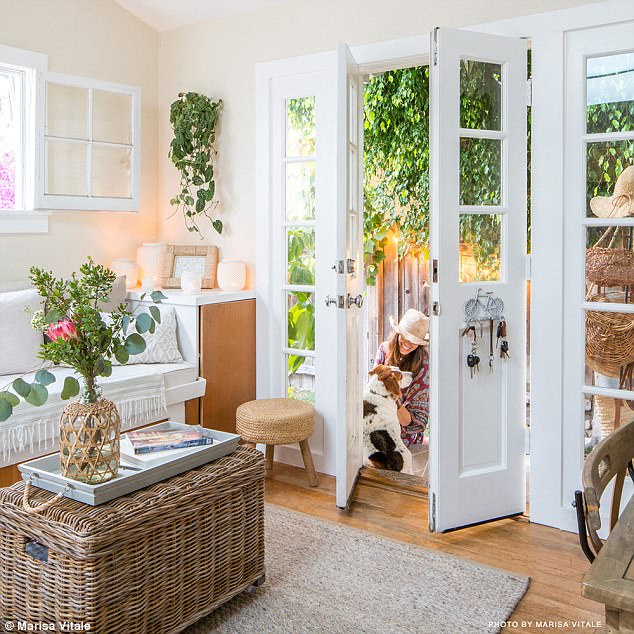 Beautiful: You would never know that this gorgeous and roomy home is actually an extremely tiny bungalow

But by utilizing their only closet space to make a room for West, the couple needed a place to put their own wardrobes, so they came up with another brilliant solution.

They built a shed outside in their backyard to hold all of their clothing and items, which is just outside their bedroom doors.

Whitney said she and her husband each have a ‘very climate-specific’ wardrobe, which makes it easier to work with the small space.

‘We keep our clothes in two plastic zip-up garment bags that hold 18 inches of hangers at a time. Our shoes are stored in divided wine crates we keep beneath our couch. Somewhere like Florida, this situation would never work, because of the rain. 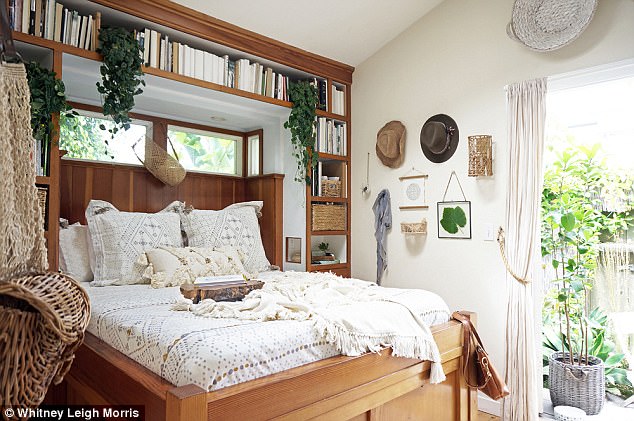 Bedroom: Every inch of the couple’s house is used in a smart way and nothing extra is added so that it never feels cluttered 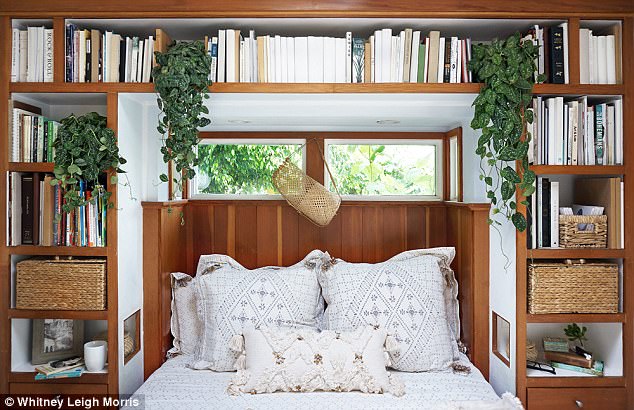 Organized: By building shelves into the walls and adding cubbies, the couple can do without a closet 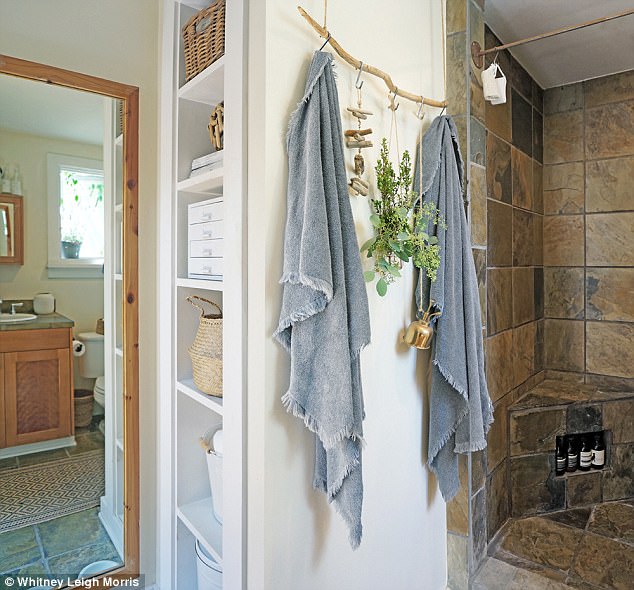 Bathroom: There is also only one bathroom in the tiny house 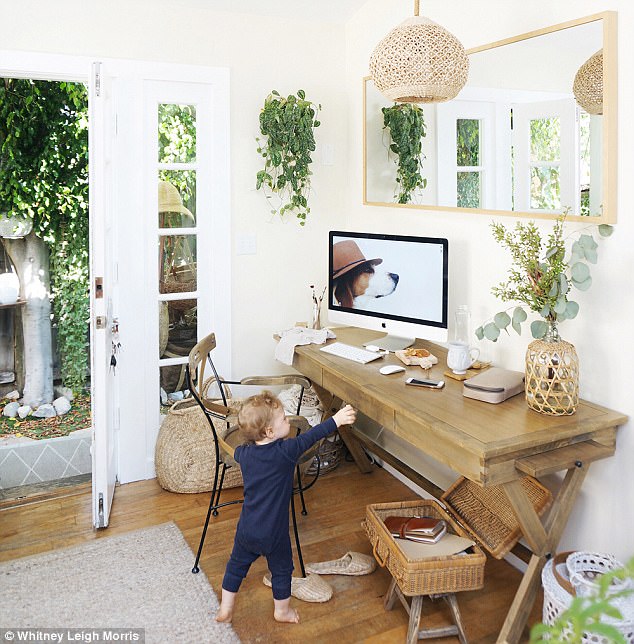 Office: The office is located in the living room, which has a nook for the kitchen as well

They said the outdoor closet even made it through a rainy winter, and the plastic garment bags ‘probably’ keep the clothes more protected in the shed that they would be in an indoor closet.

The couple was not planning on living a tiny and condensed lifestyle, but rather fell into it.

‘We just loved the house, garden, and neighborhood and jumped at the opportunity to live here. Before we even saw the whole thing, we turned around and said, “We’ll take it,”‘ Whitney said.

Before the Tiny Canal Cottage became what it is today, Whitney had a completely different life. She was living in a massive apartment in Charlotte, North Carolina with her boyfriend at the time when she realized she wanted a different life. 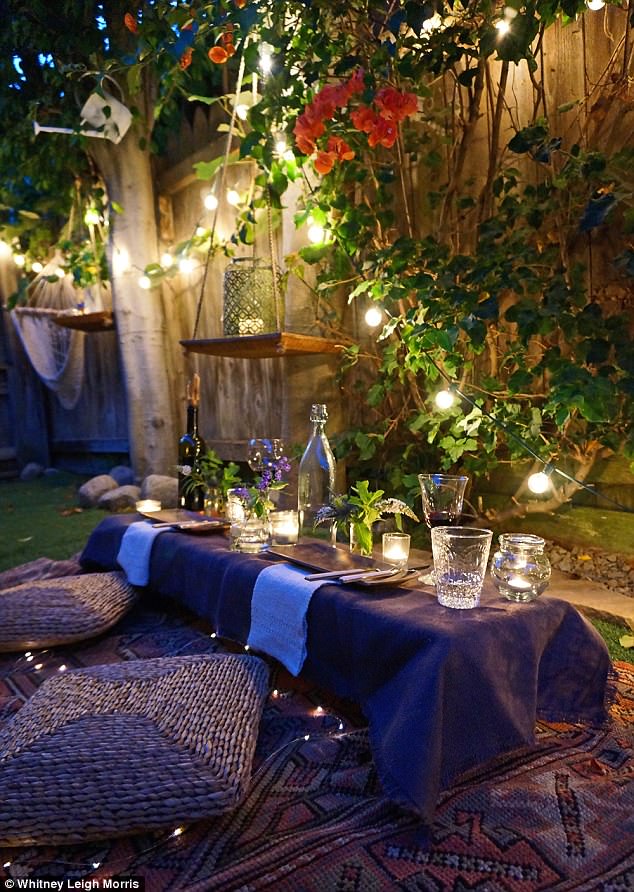 Backyard: While the house doesn’t have much space inside, there is beautiful backyard 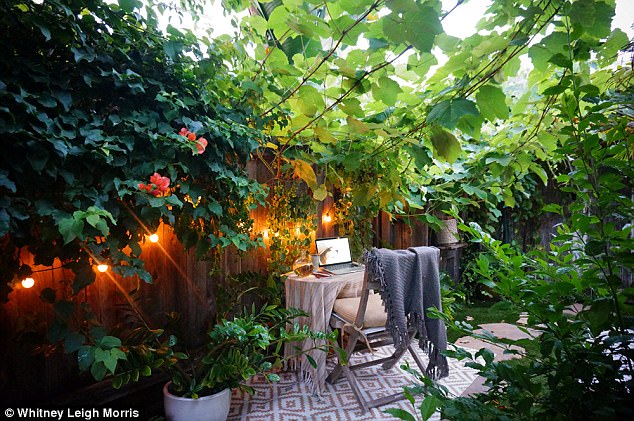 Office: The couple uses both indoor and outdoor space to accommodate their needs and due to the gorgeous weather in California, they’re able to have an outdoor office

In 2008, after being together for ten years, Whitney and her boyfriend broke up. She said that they’d bought ‘tons of stuff’ but ‘grew more and more distant as the house filled up with things.’

So, she decided to leave the luxurious apartment behind and moved to Venice Beach, where she started a new life in a studio by the beach. She admitted tha she is now happier than ever — even though the couple also shares the small space with two dogs.

‘Literally, I kept my work files in the oven — with the oven disconnected, of course. It was the best year of my life. I thought, “Wait, if I’m this happy in this tiny, little nook, what was I even doing before?”‘

Since adapting their new lifestyle in their tiny 1920’s Craftsman-style house, the married couple has one rule that they live by now.

‘If we get something new, we must donate something old. We take monthly trips to various donation centers for the stuff we don’t need.’